What Do Students in the 21st Century Want?

April 02, 2013
We can talk about higher order thinking skills all day. In fact, in discussions involving education reform, in comments on blogs that tackle education, one easily finds someone emphasizing that students must be taught not just content and that learning inside the classroom must not be confined in a box. "Critical thinking" is often overused and I am not sure if people do understand what "critical thinking" is all about. There are times when I get the impression that people are using these phrases just to sound "fashionable". It sounds "scientific". It may just be a ploy to make people think that this is "out of their league" or "out of their reach". Seriously, this is about human thinking. And for teachers, this is about students we meet in our classrooms. How can classrooms really prepare students for the challenges of the 21st century? Some despise rote learning even to the point of suggesting that this approach harms students. Do we simply stop imparting knowledge to our students so that they could find the truth on their own? What is "critical thinking"? How do we get there?

To help answer these questions, it maybe useful to look back and reflect on human thinking. It was the educational psychologist Benjamin Bloom who introduced the following classification of levels of intellectual behavior: 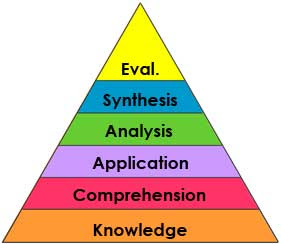 Richard C. Overbaugh and Lynn Schultz of Old Dominion University provide an updated version of Bloom's taxonomy of learning on their web page: 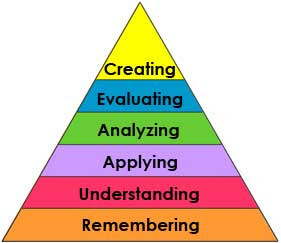 People are quick to point out that current educational systems, which some would refer to as "19th Century Schooling", emphasize only the three lower levels: Remembering, Understanding and Applying. Some would even go as far as advocating for these levels to be discarded from the classrooms. Overemphasizing the apex of a triangle does not provide for a strong base. This is what the imagery of a triangle depicts. One does not climb greater heights without conquering the lower stages first. Teachers who spend most of their time inside classrooms can likewise attest to the reality inside classrooms. Skipping the lower levels surely wins disapproval and discontent among students. What do students in the 21st century really want?

Mathematician Keith Devlin of Stanford University writes in his blog:


"...What I see in the students in high schools or those currently enrolled in a traditional college, is a total dependence on the "show me five similar examples and then ask me to do a sixth that is essentially the same" approach...

...students fall into two camps, those who value the former (21st Century learning), the others crying for the latter (19th Century instruction). Most worrying, the split appears to be largely based on age -- with the ones who will most desperately need the former (tomorrow's generation) being the ones asking for the latter (yesterday's education)...."

The split being correlated with age perhaps informs of what the real issues are. Older people have gone through the educational system and have work experience already. These people have hopefully mastered the lower levels and are now yearning for the higher order thinking skills. I use the word "hopefully" because I am afraid that some of these people may think they have squared away the first three levels but when tested on mastery of knowledge may actually be in for a big surprise. One simply has to observe posts made on social media to see how some of these adults are really exercising their intellect. Hoaxes on the internet spread rapidly and one is frequently bombarded with thousands of words of wisdom. People comment quickly on articles they have seen. The time gap between them seeing the article and making a comment is in fractions of a second. People are either light speed readers or they simply are too eager to write comments without even reading the article. The truth is: We cannot go to Creating, Evaluating or even Analyzing, without imbibing the knowledge first.

The quest for higher order thinking skills is laudable. It is the ideal. It is not adequate to stop at the lower three levels. In fact, it is impossible to master the lower three levels without occasional excursions to the upper three. Rote learning or simply being handed down information is oftentimes not engaging. One could watch cooking lessons on a television show but this is perhaps unsustainable without the occasional visits to the kitchen and actually doing some cooking. It is the engagement that fuels the required motivation to conquer the lower three levels. Without engagement, remembering, understanding and applying become a drudgery. It must have been frustrating for a basketball star like Shaq to miss those important free throws early in his career. Practicing free throws must be boring. Like basketball, it is passion and pride that can provide the motivation to work through the basic levels. As in the past centuries, 21st century schooling probably needs both more than anything else.

Those who are teaching in higher institutions of learning would recognize the need for mastery of content. Graduate programs often have comprehensive examinations to check if doctoral candidates do have a mastery of fundamental concepts in the field. Those who teach undergraduate biochemistry classes probably wish that their students already have in their heart the structures of the amino acids. Even the stockroom person in undergraduate chemistry laboratories would be happier if the students know at least the names or formula of compounds that they need for their experiments. Would it be nice to teach electrochemistry to students who have already mastered assigning oxidation numbers? Higher order thinking skills are expected from doctoral candidates. Even in graduate school, imparting these skills is very challenging to a mentor. Oftentimes, the problem lies in a student's weakness in the basic concepts of the field. As the old adage goes, "Let us not put the cart before the horse".