April 12, 2013
No, it is not a new series in Star Trek. These are the new K-12 content standards for the sciences drafted by a committee composed of Nobel laureates, members of the National Research Council, science education researchers, and standards and policy experts, which carry the same objective as the Mathematics and English Language Arts Common Core standards:

However, dissimilar to the Math and English Core Standards, only twenty six states are behind these new standards. Of these 26 states, only 21 are seriously considering adopting the standards. There are topics contained in the new standards that maybe considered as controversial by some. There is a disciplinary core idea (DCI), for example, called "Earth and Human Activity", to be introduced as early as third grade. Along this line, global climate change is expected to be taught in middle school. With the substantial number of Americans objecting to climate change, one could only expect some opposition to these new standards.

The following table lists the disciplinary core ideas included in the new set of standards:

Unlike in the middle and high school sections of the standards, the standards are described specifically at each grade level in kindergarten and elementary. It is worthwhile to point out what science education is at these early years as recommended by these new standards. The following are the story lines for kindergarten and grades 1 and 2: 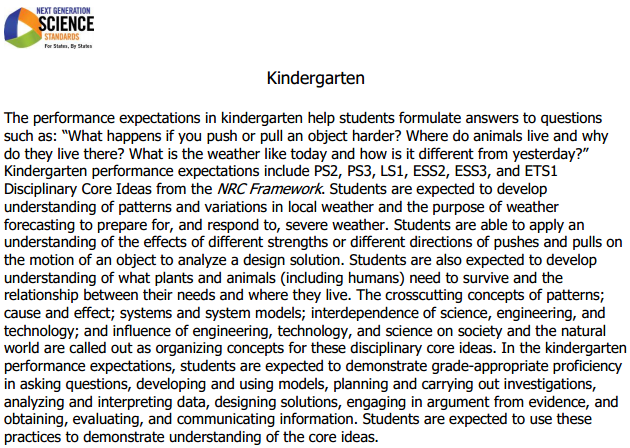 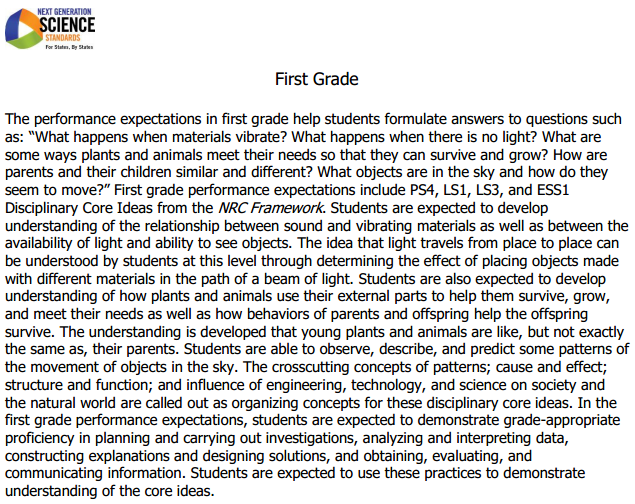 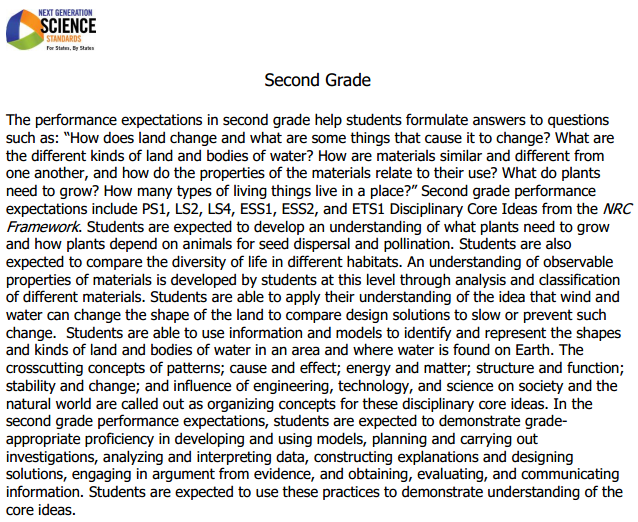 It has taken about three years to develop this document which can be downloaded from the web site: "The Next Generation Science Standards: For States, By States". So, now that the standards are out, what is next? Erik Robelen writes in Education Week ("Common Science Standards Make Formal Debut"):

In a recent interview with reporters, U.S. Secretary of Education Arne Duncan was asked about the common science standards and seemed to suggest such action by his department was not likely.

“There’s a growing recognition among states that having everyone do this in isolation doesn’t make sense,” he said. “If these are good, strong standards, I think there will be significant interest out there without us needing to do a lot.”

A comment on the article in Education Week, notably since it is coming apparently from an education reformer, Sandra Stotsky of the University of Arkansas, catches my attention: "Wouldn't it be useful to get the informed opinions of some real (and independent) scientists on these science standards? Why is it that all we hear from are "policy makers" and department of education staff?"

So far, these are just the standards. It is up to the states that will adopt these standards to draw and design the curriculum. As a scientist, I am thrilled that people are paying attention on how science is taught in basic education. It is a far much better than seeing politicians or policy makers remove the subject from the early grades.