April 04, 2013
One of my chemistry teachers at the Ateneo, the late Fr. William Schmitt, S.J., used to thumb up his nose and wave the other fingers to show us just how much he dislikes statistics. It was a course on quantitative analysis and everyone was graded in the laboratory according to accuracy and precision. Precision was very important. A large spread in experimentally determined values meant lower grades. One of the projects I did under Fr. Schmiit's guidance was to design a scheme in which two solid powders, sodium chloride and potassium hydrogen phthalate, are mixed homogeneously such that the percent composition of any portion in the mixture is practically uniform. Those experiments involved subjecting the mixture to a ball mill grinder for days. Precision requires the same answer all the time. It is definitely the opposite to when statistics is necessary.

Evaluating education obviously requires statistics because of individual differences. It is in the vast sea of differences that statistics attempts to unravel a trend, something that is general. It may not apply to all cases, but it applies to most. That is the hope. By examining a set of data, often collected with attention to representing appropriately the entire population, one strives to extract information that allows seeing the data as a whole and not as fragmented and unrelated pieces. A recent example is an analysis of gender differences  in science, technology, engineering and mathematics (STEM). The study, "Not Lack of Ability but More Choice: Individual and Gender Differences in Choice of Careers in Science, Technology, Engineering, and Mathematics" is published online in the journal Psychological Science: 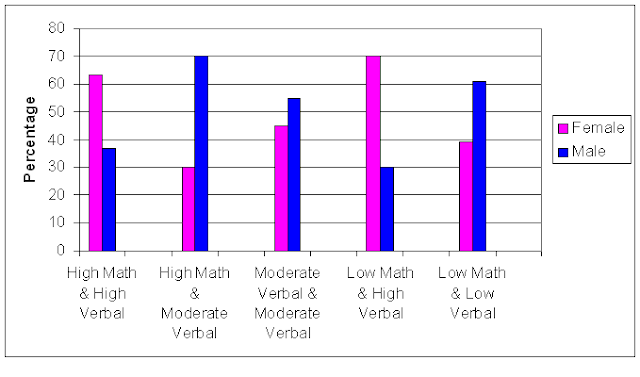 First, girls outnumber boys in the highest category (high math and high verbal). On the other hand, boys outnumber girls in the lowest category (low math and low verbal). The trend is opposite in the intermediate groups, boys outnumber girls in high math and moderate verbal, while girls outnumber boys in low math and high verbal. Since these two intermediate groups outnumber the two extremes, it can be concluded that there are more boys than girls that have high math scores, and there are also more girls than boys that have high verbal scores. This is likewise in agreement with a previous survey highlighted in one of the posts in this blog, "Girls in Science (Gender Differences)". In that survey, an examination of scores in international tests shows that boys outperform girls in math while girls do better than boys in reading. In this current survey, among the students who scored high in math, 56% are males, and 44% are females. Overall, students who did well in math comprised 45% of the entire sample. The number 45% agrees well with a previous survey by the Business Higher Education Forum: 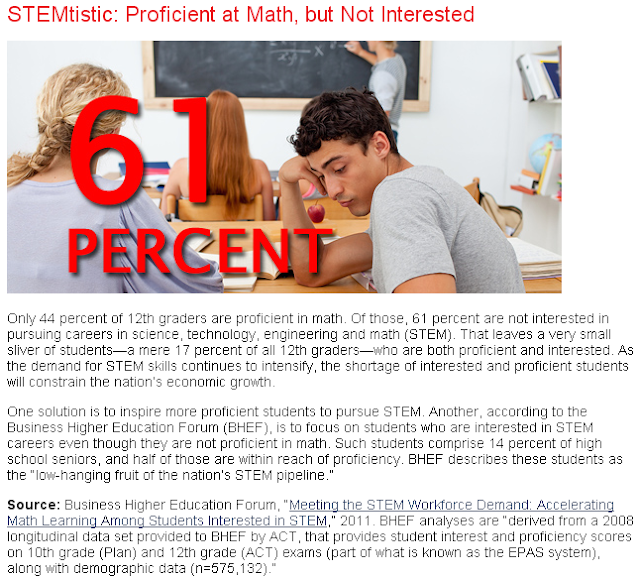 Of the 44 or 45% who do well in math, only 39% are interested in STEM. Thus, what is highlighted in this new study is the fact that there are more girls than boys that are good in both math and verbal exams. The authors therefore suggest that one reason behind the lower number of females entering STEM fields is not so much about lack in proficiency but more about having more options. These female students are talented in both and therefore have more choices. This can be seen by looking at what careers the high school graduates  of 1992 have chosen. Only a third of the students are proficient in both math and verbal skills entered a STEM field while half of students who were proficient in math, but only average in verbal skills chose a STEM career.

The authors of "Not Lack of Ability but More Choice: Individual and Gender Differences in Choice of Careers in Science, Technology, Engineering, and Mathematics" therefore correctly conclude:

Thus, it is important to inspire talented women in both math and language to pursue STEM. This is part of the solution to gender differences in the sciences in the United States. In the Philippines, a statistical study would also be helpful. I am guessing that problems in STEM in the Philippines come from a lack of both proficiency and interest. As CNN said in one of its special reports on the Philippines:


"....Around 60% of children in the Philippines enroll in high school, but just 1% of those in their final year receive qualifications in math and physics, according to a 2008 report from the International Association for the Evaluation of Educational Achievement...."