January 17, 2013
Poverty is indeed a crucial factor in education. It has significant impact on the environment and resources. To address problems in basic education, it is worthwhile to examine how exactly measures designed to ameliorate the conditions in poor schools address the challenges. To achieve this, it is necessary to exercise caution while sifting through data. Otherwise, data can mislead and the wrong conclusions could be drawn. One piece of data worth a second look is Exhibit 2.1 (TIMSS 2008 Distribution of Achievement in Advanced Mathematics) which can be also be found in a previous post on this blog "The Role of Higher Education": 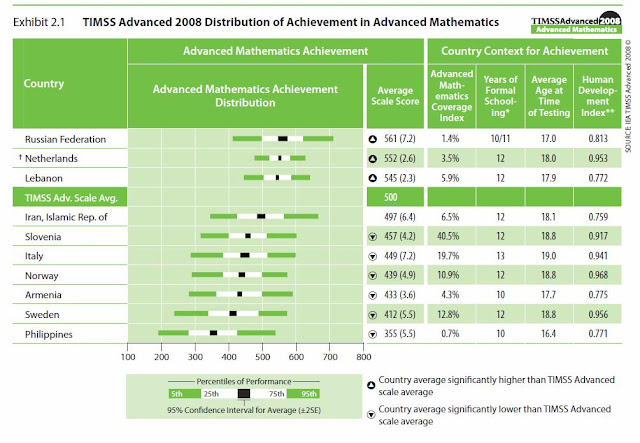 Careful attention to data is very crucial. Rick Kahlenberg in the American Educator recently wrote an article, "High-Flying High-Poverty Schools". In this article, Kahlenberg carefully examines results touted by the Heritage Foundation which claims that schools mired in poverty could perform well ("No Excuses for Poor Children Not to Learn, Research Shows"). It is true that there are "poor" schools that perform well and the Heritage Foundation found 21 schools that do. But this number should be placed side by side against 7000, the number of high poverty schools that do not perform well, as identified by the US Department of Education.

Equally important to analyzing data is seeing the relevance. Some would easily dismiss data and statistics from other places with the usual claim that such information only applies to that specific place. It is true that one must examine the specific conditions from which the data have been drawn, but one must also be able to see that not all of the data could be dismissed this easily. A lot do apply. Schools in the US are largely run at the local level. School funding oftentimes therefore depends on the neighborhood. States are responsible for public education and even within states, each county has its own school board that acts with a great degree of independence. Public school education is supported by local taxes. Part of these taxes come from real estate. Real estate taxes are based on the appraised values of properties in the neighborhood. What is particularly interesting is that house prices in a neighborhood strongly correlate with the quality of the public schools in that community. This somewhat explains why there are high-poverty schools in the US - these are schools in poor neighborhoods where family income is low - which also leads to poor funding of the schools.

A developing country like the Philippines is similar in a lot of ways to a poor school district in the United States. Schools in the Philippines face similar challenges as lack of resources, shortage of competent teachers, and a poor environment for learning outside school. In this respect, Kahlenberg's examination of another program (which is the main subject of his article, "High-Flying High-Poverty Schools"), Knowledge is Power Program (KIPP), can be particularly enlightening. His final analysis shows that in the midst of all the data, what should be clear is that peer environment matters a great deal in learning. The following paragraph is especially insightful: 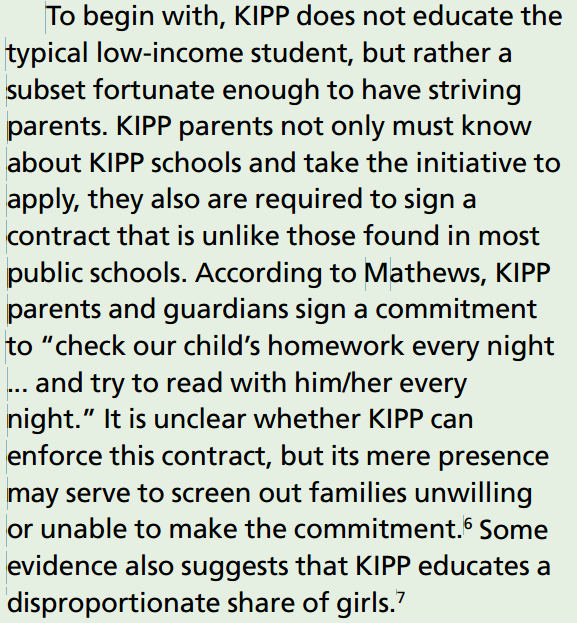