January 30, 2013
Writing an exam always seems easy than taking one. Writing a good exam, however, is an entirely different story. Open-ended questions are usually not employed in math and science exams unless the ability to propose novel approaches or ideas are sought. Math and sciences therefore usually come with well-defined answer keys. Part of the nature of science is formulating the question. Defining a problem is sometimes one of the most difficult steps in the scientific method. Formulating the question that needs to be answered is already a significant part of scientific thinking. Experiments are designed carefully with the objective of focusing on one variable at a time, if possible. Stating a hypothesis that can be tested is the first step in science. The questions one may ask are only those in which there is a possibility of arriving empirically at the answer. Take, for example, the following figure which can be found in the General Chemistry Textbook, "Chemistry: The Central Science", by Brown, Lemay, Bursten, Murphy and WoodWard (Prentice Hall, 12th Ed.): 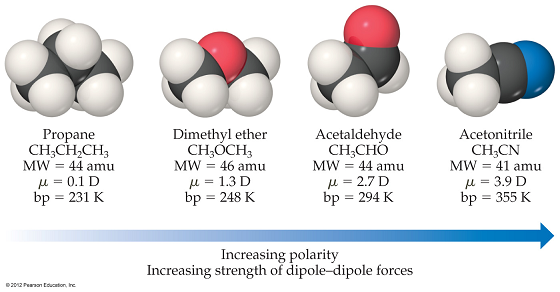 The above are four molecules. These molecules are not randomly chosen. These molecules are more or less the same size. This is important because through this series, one is able to narrow down how the boiling point (bp) of each compound varies with the polarity (measured by the dipole moment, mu) of the molecule. Without such meticulous choice of compounds, other factors can play a major role. In fact, in most cases, one sees the boiling point of a compound strongly correlating with molecular weight (MW). The normal boiling point of a liquid is the temperature at which the liquid spontaneously evaporate into the gas phase under normal atmospheric pressure. Evaporation at the molecular level is obviously viewed as separating molecules from each other. In a condensed phase like the liquid, molecules are close together while in the vapor phase, molecules are far apart. Therefore, the boiling point is a measure of how strong molecules are held together in the liquid phase. Interactions between molecules in the liquid phase arise from electrostatic as well as van der Waals interactions. The polarity of a molecule, that is, how unequally shared the electrons are between atoms, should dictate the strength of electrostatic interactions. On the other hand, van der Waals interactions which rely on momentarily disturbing electronic distributions are more dependent on the surface area of contact between molecules, which correlates with size. The above case thus illustrates a situation where multiple factors could be present and the scientist simply restates the question in a careful way so that the problem is indeed tractable and therefore solvable. The above illustrates an important characteristic of scientific thinking. Scientific thinking chooses the right questions to ask.

Recently, I have been asked two questions:

1. What do you think is wrong with the DepEd's decision to exclude science in grades 1 and 2 curricula?
2. How will this affect the student over the long term?

I only wish that I could choose the questions. Alas, I did not have that option. So, as a scientist, I checked if someone has already answered the question. And someone has. (Akerson et al. Journal of Science Education and Technology Volume 20, Number 5 (2011), 537-549) as well as (Science K-8: An Integrated Approach, by E. Victor, R.D. Kellough, R.H. Tai, Prentice Hall, 2007).

So with these articles and the Philippine situation in mind, I did try to answer these questions. To the first one, I wrote:

The impetus for early childhood education in science involves both appropriateness and opportunity. The inquisitive and curious nature of the human mind at this stage calls for encouragement and stimulation which science education provides. The fundamentals of the science disciplines, which could be as simple as listening attentively and carefully to what others say, or developing keen observation skills, are necessary toward the development of a critical and questioning mind. Not having a formal subject of science in the early years denies its primary role in humanity, how we reason, relate and represent. Young children can be taught to compare and contrast, make observations and measurements, and appreciate nature. Without a formal subject of science in kindergarten and in the first two grades, there is no specific classroom time assigned to these activities. These lessons are therefore likely to be missed.

And to the second question, I answered:


Opportunities not taken are missed. Timeliness is lost. The foundations of critical thinking are then postponed until later years. Postponing science education implies remediation and therefore influences what can be taught in the later years since much of learning occur in steps. What society teaches in the early grades is what society advertises to its youngest members. Interests in careers in science and technology need to be cultivated as early as possible. It should not be later than the introduction of arts, music and religion.

Grade 1 schoolchildren, of course, need not see propane, dimethyl ether, acetaldehyde or acetonitrile. But there are so many things that children can compare and contrast even during these early years. It is not really too early for children to learn how to ask the right questions....