Our Indigenous Schools Will Rise Above the Storm 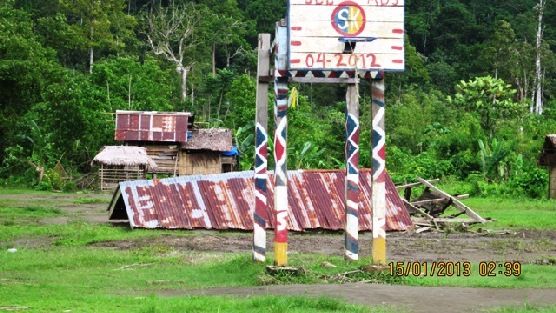 Superstorm Pablo (international codename: Bopha) mercilessly whipped at the riverine Lumad communities in early December last year. The magnitude of the disaster violently squeezing through the eastern provinces of Mindanao towards the northern part of the island, then out to the Visayas area in a span of few hours is a phenomenon the Lumad never imagined all their lives. The wrath of mother nature over man’s abuse of the environment pounded like eternity resembling doomsday. And, in those critical hours, they turned to Magbabaya for help and beseeched His intercession.

For sparing every dear Lumad life, thanksgiving rites to Magbabaya (God) were offered after the storm.

Still, the Pablo aftermath left badly devastated farms, lowly dwellings – tribal schools included, and the forest in Western Agusan and Bukidnon where the tribes folk depend for sustenance. All 16 schools run by RMP-NMR and the communities hosting them sustained damages in varying extent.

Three of the four schools along the banks of Adgaoan River in La Paz, Agusan del Sur were totally destroyed, torn down and swept by the raging floodwaters. All teacher’s cottages were wrecked completely, as well as books and learning materials all drenched and rendered unusable. The farms tilled by the communities for school use, the children’s vegetable gardens, and individual farms of 70 families were inundated altogether in total waste. Sixty-one houses were likewise swept by the floodwaters.

Flooded communities sought temporary relocation to higher grounds and undertook measures in facing the effect of the catastrophe on their own. The inaccessibility of their communities to communication and transportation put them in most disadvantaged position. Not only were they deprived of the immediate relief assistance right after storm, what more for the much needed aid for rehabilitation due them as taxpayers. In fact, after weeks of waiting, ironically enough, all they got were a measly 10 kilos of nails and 12 kilos of rice from the local government of La Paz to ba apportioned among them.

Similarly, schools along the rivers of Laminga, Candiisan and upstream Adgaoan in San Luis municipality were less spared either. Except for the school building in Tabon-tabon that stood unscathed, all three other schools and teachers’ cottages were damaged, all learning materials soaked and rotting . The teachers’ cottage in Maputi has to be abandoned instantly amidst the raging storm to escape the forthcoming landslip right where it was erected. Four school farms and six children’s gardens all washed out. 61 individual farms including a 7-hectare root crops feeding whole community of Kihinggay were totally damaged. 26 houses were entirely destroyed.

In the face of this calamity, all the Lumad residents received was a mere survey form of typhoon victims entitled to receive relief assistance from the local government of San Luis. Until now, no assistance whatsoever reached the hapless communities.

The lone school in Esperanza suffered just the same. While the school building was only partially damaged, the cottage was demolished and all learning materials are desperately irretrievable. Three school farms, 3 children’s garden and 33 individual farms devastated, 21 houses shattered.

The communities in Bukidnon unexpectedly went through the same incident. As a landlocked highland central province of the Mindanao island, the province used to be a typhoon-free area. Besides the typical dry and wet season that acclimatized the communities, Bukidnon residents are alien to typhoons, much less to a super typhoon like Pablo and were not as prepared therefore as other communities that at are often visited by storms. With one sweep, all three tribal schools and teachers’ cottages in Quezon were damaged. Instruction and learning materials including school records all ruined. Lumad houses usually built on light materials crumbled and farms that nurture the communities ravaged.

Mahan-ao, a sityo of Bolunay in Impasug-ong was hit the most. Owing to the absence of a radio set or any reliable communication equipment, the secluded community was not forewarned of the incoming storm. Uninformed as they were, the classes went on normally. The classes by the way, are held in the village hall for years now because of the absence of a school building. While the classes were in progress, the crushing wind coming with heavy downpour whooshing in a whirlwind, combed the community in the early morning plucking the roofs and uprooting trees. The teachers and children alike scampered for safety to avoid getting carried away by the wind. The sityo hall collapsed straightaway. Hut rafters, trees and heavy objects were falling down everywhere. In fact, Benjie, one of the community teachers almost lost his life in vain attempt to save the school materials.

After the storm, there is nothing more left to recover. The borrowed school building, fixtures and everything – demolished by Pablo. The entire community was in shambles. Not one hut is left standing, all farms destroyed.

But life must go on.

On their own, these affected communities made every effort to rebuild their homes, replant anew, and resume classes in makeshift community schools especially now that the end of school year is only few months away. However, classes cannot proceed normally because of the unpredictability of weather systems, instability of their temporary shelters, daily food foraging and school facilities still in disarray.

The government’s cold treatment of the marginalized Lumad victims of Pablo glaringly underscored its age-old practice of discrimination against the ethnic minorities. They have been victimized repeatedly by big business interests and big landowners who grabbed and raped their ancestral lands leaving them helplessly at the receiving end of nature’s revenge. As the facts show, they are always neglected if not the least attended to in difficult times like epidemic outbreaks, militarization, floods, drought, and now with typhoon onslaught.

It is no surprise therefore to us Lumad advocates to hear the reverberation of the persistent Lumad outcry - the recognition of their right to self-determination. Thus, the continuing Lumad struggle.

But believing in the inherent capacities of organized Lumad communities, we are sure that they will rise above the storm.