A Voice from the Past

January 29, 2013
I hope that most of us still find the time to recall, recollect and reflect. Like all mankind, we are often travelling forward in time so we must take the opportunity once in a while to look back. This is what photographs and memories are about. As I glanced back, I stumbled into the following old issue of Heights, Ateneo's literary and artistic publication: 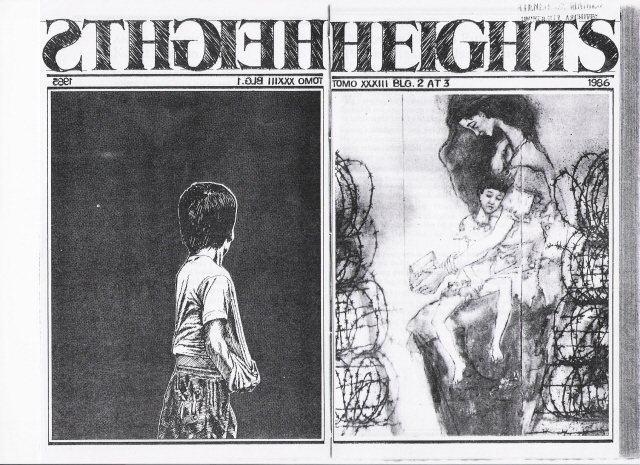 This was the issue of Heights that came out at the same time Marcos' regime ended. I particularly liked the cover. Of course, this issue was special to me since I had a poem in it:


This was a poem that I wrote when I turned 20 years old. And yes, at that time, I was looking back. Even as I was climbing the stairs, I had my eyes on the steps I left behind.

Years ago, when I was in Paete, Laguna, trying to introduce online learning resources to elementary school teachers, I found one teacher who did not attend my lectures. Fortunately, I found a moment to spend with this teacher. Right at the very beginning of our conversation, it was clear that I would be the listener. The teacher spoke from experience, how things really were inside the classroom. With great pride, techniques of how to keep the attention of young children were handed to me. The tips were not novel but these reminded me of my own grade school teachers. And so I listened, quite attentively.

There is an old book far older than me or this teacher that has been recently brought back to life in a post on the Education Week blog. The title of the post is "This 19th Century Book is Still Timely for Teachers". It is written by Peter Gibbon. The book that Gibbon describes is "Talks to Teachers" by William James, published in 1899. A quick read of the book reveals that Gibbon has done an excellent job in distilling the spirit of James' text. Gibbon's concluding paragraph captures the essence of "Talks to Teachers":


Talks exemplifies balance. James' approach to education is pragmatic and eclectic: memorize and associate, handle objects and think abstractly, compete and cooperate, work in groups and struggle alone. To a friend, he wrote that Talks should encourage "a certain flexibility of mind"—as useful a habit today as in 1899.

Compared to the conversation I had with a teacher in one of Paete's elementary schools, the tone was identical. The town of Paete, Laguna is well known for its carving. Naturally, this teacher talked about primary schoolchildren working with bars of soap as a way of introducing the young mind into carving. Handling objects, for this teacher, was very important for this teacher. It had to be practical yet diverse. It had to be something that children could easily relate to. Association was key to learning.

Darwin's theory was relatively new. The quantum world was just about to be discovered yet James' book characterizes human learning in ways that seem to forebode the scientific revolution of the early 20th century. And as Gibbon claims, James' ideas are still relevant to the 21st century. This somehow brings me back to what Pasi Sahlberg said about reforming education in "How Can Research Help Educational Change?":


"...I think we need to rethink a couple of things. First, we don’t necessarily need new schools like charter schools to develop innovative educational changes in our school systems. What we need is more flexibility, enhanced leadership, and more trust in schools and teachers to find ways to make learning inspiring and productive for all. Charter schools may have their place as educational alternatives but not as a solution to the system-wide problem.

Then, we should make better use of all those pedagogical innovations that have been developed during the last century or so. I think the real problem is that in education we tend to develop innovation after innovation without really solving the problem of implementation. We know enough about powerful teaching, purposeful assessment, effective schools, and insightful leadership to make our public school systems work better. Much of this knowledge has been produced, ironically, by American researchers and innovators starting from John Dewey in early 20th century."

Pasi reiterates this in another article, "What the US Can't Learn from Finland":


"...many education visitors to Finland expect to find schools filled with Finnish pedagogical innovation and state-of-the-art technology. Instead, they see teachers teaching and pupils learning as they would in any typical good school in the United States. Some observers call this “pedagogical conservatism” or “informal and relaxed” because there does not appear to be much going on in classrooms.

The irony of Finnish educational success is that it derives heavily from classroom innovation and school improvement research in the United States. Cooperative learning and portfolio assessment are examples of American classroom-based innovations that have been implemented in large scale in the Finnish school system...."

A voice from the past, James concludes his Talks:


"...I have now ended these talks. If to some of you the things I have said seem obvious or trivial, it is possible that they may appear less so when, in the course of a year or two, you find yourselves noticing and apperceiving events in the schoolroom a little differently, in consequence of some of the conceptions I have tried to make more clear. I cannot but think that to apperceive your pupil as a little sensitive, impulsive, associative, and reactive organism, partly fated and partly free, will lead to a better intelligence of all his ways. Understand him, then, as such a subtle little piece of machinery. And if, in addition, you can also see him sub specie boni, and love him as well, you will be in the best possible position for becoming perfect teachers."