June 17, 2015
A proponent of linguistic rights once told me that DepEd's K to 12 from his perspective was a lesser evil. The Enhanced Basic Education Act of 2013 mandates the delivery of basic education in "languages understood by the learners". For kindergarten up to third grade, the medium of instruction is the regional or native language of the pupils. The law also prescribes DepEd to formulate a transition from fourth to sixth grade such that in high school, English and Filipino can be used as languages of instruction. It is then easy to see why in the eyes of those who fight for linguistic rights, DepEd's K to 12 is a lesser evil. Unfortunately, this is just one of the many provisions of the K to 12 law.

There have been several petitions submitted before the Supreme Court in the Philippines asking for the suspension of K to 12. What is quite clear in all of these petitions is the size and scope of DepEd's K to 12 reform. Perhaps, the Enhanced Basic Education Act of 2013 is actually too big that it cannot avoid violating the Constitution of the Philippines.

Legislation is obviously a political process. To gather enough support, lawmakers could be throwing a bone, a favored provision, to each interest group. The "linguistic group" obviously received the mother tongue-based multilingual provision. Similarly, the various tracks offered in the additional years of senior high school are meant to cater to a smorgasbord set of interests.

Legislation in the Enhanced Basic Education Act of 2013, however, goes far beyond matters of protection and interests. The law specifically dictates that the curriculum must adhere to the following enumerated standards and principles: learner-centered, inclusive and developmentally appropriate; relevant, responsive and research-based; culture-sensitive; contextualized and global; constructivist, inquiry-based, reflective, collaborative and integrative; spiral progression approach; flexible enough to enable and allow schools to localize, indigenize and enhance. With this huge list of principles, one actually wonders if any of these actually contradict each other. Likewise, one may wonder if all of these guidelines are actually possible to follow. What is apparent is that legislation in this case is trying to score as many points with each of these sound bites.

The Enhanced Basic Education Act of 2013 dictates so much. And when it comes to how its provisions are going to be realized inside classrooms, the law comes very short. While legislation often has good intentions, lawmakers frequently miss the important part of considering how the reform would be implemented. Furthermore, there are matters that should not be legislated. Education has issues to which one may ask the question of what works and what does not work. These issues can only be decided by evidence, not by laws. There is no legislation, for example, that can repeal the laws of thermodynamics. Education should be treated like we treat the field of medicine. Laws regarding healthcare are confined to providing funds, protection of rights, and definition of responsibilities. Laws should not mandate what medicine should be prescribed or what procedure ought to be performed. These decisions are left to those who actually know medicine.

Proponents of K to 12 claim that the new curriculum has been extensively studied and most stakeholders have been consulted. One can compare DepEd's K to 12 record to how a school district in the United States approaches curriculum reform. Fairfax county in the state of Virginia recently reviewed its mathematics curriculum. The review started in August of 2013. Doing due diligence by reviewing literature relevant to teaching of mathematics, the initial phase of the study took two months. Another seven months were spent on examining student performance. Another month was then dedicated to analyzing the current curriculum. Finally, in September of 2014, recommendations were made.

One can simply browse through the documents provided as links in the above paragraph to appreciate what actually goes through a consultative study on a curriculum. And this is only for one subject in basic education, mathematics. The number of people surveyed alone shows what it takes for a process to be consultative: 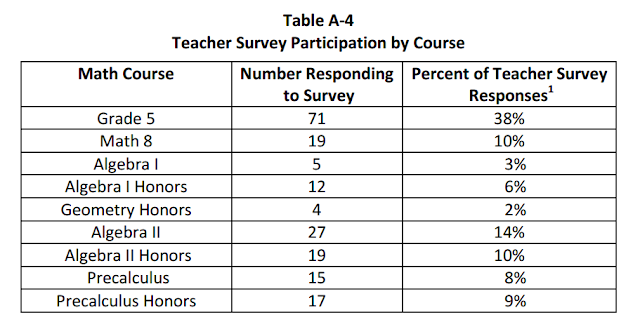 There are 185,000 students enrolled in Fairfax county schools. The number of parents (4755), students (2947) and teachers (189) surveyed attests to how seriously this study regards consultation. One can right away see how Fairfax county approaches curriculum hugely differs from section 6 of the Enhanced Basic Education Act of 2013 which defines the membership of a Curriculum Consultative Committee. Such committee under the K to 12 law in the Philippines does not include parents, students and teachers.

One should also browse through the review of literature done by Fairfax county. The references cited in the report demonstrates a thorough and careful review of what is already known. These references do not merely talk about propositions or sound bites. The published literature cited and considered in the report are not about unfounded or untested ideas regarding mathematics education. These references are on studies that are based on evidence. On the other hand the Enhanced Basic Education Act of 2013 embraces a myriad of principles or standards regarding basic education without considering evidence.

Fairfax county also looked at its own data, mainly on how its students were performing in mathematics. Proponents of K to 12 often claim that professionals from the Philippines do not receive proper recognition because they lack two years in basic education. This sadly remains a claim because there is no data backing up such hearsay.

Petitioners against DepEd's K to 12 point to provisions in the Enhanced Basic Education Act of 2013 that supposedly violate the Constitution of the Philippines. What should not be lost, however, is the fact that the law contradicts itself by not being based on good research and evidence.