Instead of Showing Errors in the English Module, Here Is a Graph that Shows Something Much More Important

June 09, 2015
Janvic Mateo of the Philippine Star reports that DepEd Secretary Luistro "has challenged an academic supervisor of a private school in Quezon City to show him the errors in the final version of an English learner module released by the agency". Recently, an editorial from the Manila Times questions the reasons provided by those who oppose DepEd's K to 12 and concludes that critics of the new curriculum are "condemning the poor to a lower standard than the rest of the world".  Rudy Romero of the Manila Standard provides a classic example of the false analogy logical fallacy as he equates opponents of K to 12 to Luddites who opposed the Industrial revolution.

Sound bites and logical fallacies may indeed persuade but a picture based on facts can still deliver far more powerful words than a sentence or even a paragraph.  This particular one comes from an article by Eric A. Hanushek, Dean T. Jamison, Eliot A. Jamison and Ludger Woessmann published in Education Next: 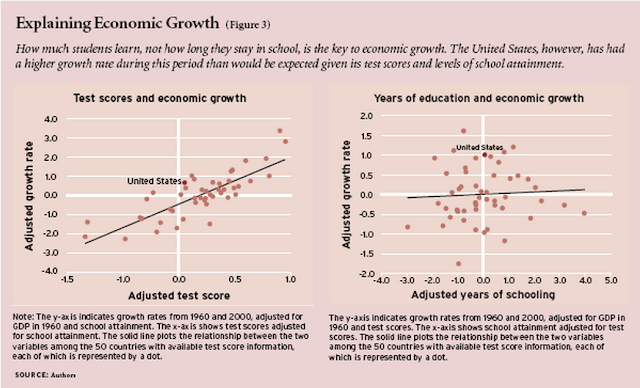 
The level of cognitive skills of a nation’s students has a large effect on its subsequent economic growth rate. Increasing the average number of years of schooling attained by the labor force boosts the economy only when increased levels of school attainment also boost cognitive skills. In other words, it is not enough simply to spend more time in school; something has to be learned there.

The Philippines is included in the above graph. Where it currently stands in terms of cognitive skills is shown in the following table (also copied from Education Next): 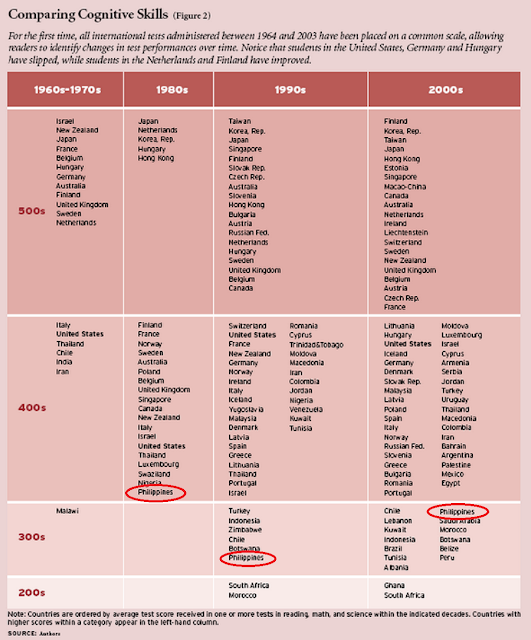 The spiral progression, learning styles, discovery-based instruction, which are major elements of the new curriculum, are not proven by research as effective. In fact, "learning styles" is even a myth. The new curriculum is therefore not expected to improve learning in schools. And neither do two additional years.

Problems in basic education arise mainly from inadequate resources. Those who criticize DepEd's K to 12 are simply asking what is required first to make schooling more effective.

A good basic education system should not only cater to bright pupils. These gifted students often succeed in spite of poor schooling. A good basic education system must focus instead on providing quality education for all. In their analysis of schools systems across the globe, Hanushek and coworkers find that "both the performance of countries in ensuring that almost all students achieve at basic levels and their performance in producing high-achieving students seem to matter." Education for all is not possible when much needed resources are not delivered to all schools. Proponents of K to 12 need only to begin subscribing to reality to see that the new curriculum must be stopped.