Education Is a Continuous Sustained Task, It Is Likewise Personal

June 12, 2015
During the early seventies, access to a television meant a child could watch Sesame Street, an American children's television series that focused on helping young children prepare for school. Using the television, Sesame Street was designed as an educational tool that made use of muppets and animation to capture a child's attention. For those of us who grew up during the seventies, the television was the technology that could have disrupted education.


With hindsight, one can now evaluate how technology as applied in Sesame Street affected education. A recent paper from the National Bureau of Economic Research by  Melissa S. Kearney and Phillip B. Levine accomplishes this by looking at educational outcomes as functions of access to this television show. Jim Tankersley describes the results of the study in a Washington Post article:


The most authoritative study ever done on the impact of “Sesame Street,” to be released Monday, finds that the famous show on public TV has delivered lasting educational benefits to millions of American children — benefits as powerful as the ones children get from going to preschool.

Popular press can indeed sound dramatically different from scholarly articles. In this particular case, the claim "delivering lasting educational benefits to millions of American children" can be easily traced to the abstract of the original paper:

Sesame Street is one of the largest early childhood interventions ever to take place. It was introduced in 1969 as an educational, early childhood program with the explicit goal of preparing preschool age children for school entry. Millions of children watched a typical episode in its early years. Well-designed studies at its inception provided evidence that watching the show generated an immediate and sizeable increase in test scores. In this paper we investigate whether the first cohorts of preschool children exposed to Sesame Street experienced improved outcomes subsequently. We implement an instrumental variables strategy exploiting limitations in television technology generated by distance to a broadcast tower and UHF versus VHF transmission to distinguish counties by Sesame Street reception quality. We relate this geographic variation to outcomes in Census data including grade-for-age status in 1980, educational attainment in 1990, and labor market outcomes in 2000. The results indicate that Sesame Street accomplished its goal of improving school readiness; preschool-aged children in areas with better reception when it was introduced were more likely to advance through school as appropriate for their age. This effect is particularly pronounced for boys and non-Hispanic, black children, as well as children living in economically disadvantaged areas. The evidence regarding the impact on ultimate educational attainment and labor market outcomes is inconclusive.

Unfortunately, the above abstract contains information that are not really part of the work described in this paper. It is then easy for readers to miss the actual findings of the paper. The more important finding is in the last sentence of the abstract, "The evidence regarding the impact on ultimate educational attainment and labor market outcomes is inconclusive".  In specific terms, whether a child had access to Sesame Street while growing up does not correlate with either high school graduation or employment. What access to Sesame Street seems to correlate with is school-readiness as demonstrated in the grade-for-age status.  Those who are assumed to have watched Sesame Street while growing up appeared to be more likely (by 2-3%) enrolled in a grade level appropriate to their age. This should not be surprising as previously noted in an article on this blog, Sesame Street: When Is Something Better Than Nothing?. It is not a substitute for school. Its effectiveness becomes evident only when it is solely the source of early childhood education. It is better than nothing.

For the children today, some people believe that various technologies such as mobile devices, electronic readers, tablets, and various applications and software are about to disrupt, yet again, education. As noted by Kearney and Levine, there is something to be learned from this study on the effectiveness of Sesame Street.

In addition, education requires a continuous and sustained effort. It is true that early childhood education significantly affects learning outcomes, but these effects often vanish with time. Kearney and Levine pointed out:


Students reach 1st grade better able to begin a reading curriculum, for instance, but at some point all students will have accomplished that goal. One interpretation of weak longer-term effects is that educational interventions need to be maintained and continuous so that students can build on the gains they have already attained to keep the momentum going.

It is therefore highly appropriate to refer to years in basic education as grades, since these are truly steps.

Not only young children could learn from Sesame Street, even adults especially education policy makers could pick a lesson or two. For example, taking note of the required continuous and personal nature of education, it can be seen that DepEd's K to 12 curriculum is wrong-headed.

First, it fails to see education occurring at stages. The scores in international math tests should have informed the Philippines' DepEd where the problems lie. TIMSS is given to 4th grade pupils, on average, 10-year olds. In this test, the Philippines is the third lowest scoring country. 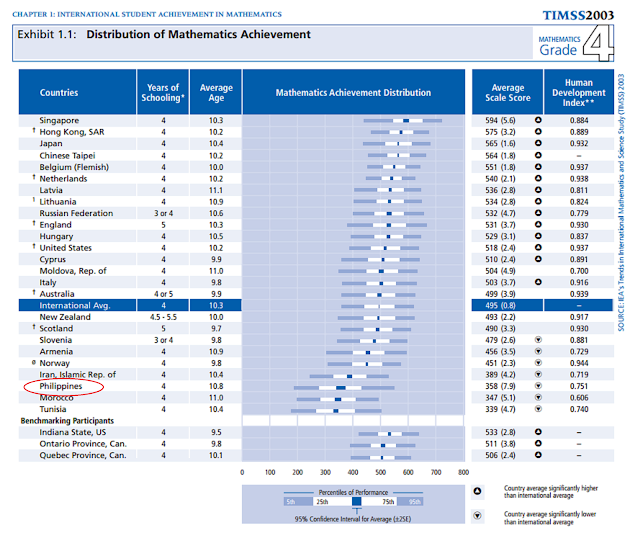 Since 4th grade precedes 8th grade, one should not be surprised that a similarly disappointing performance is seen in the exam administered to 14- and 15-year olds: 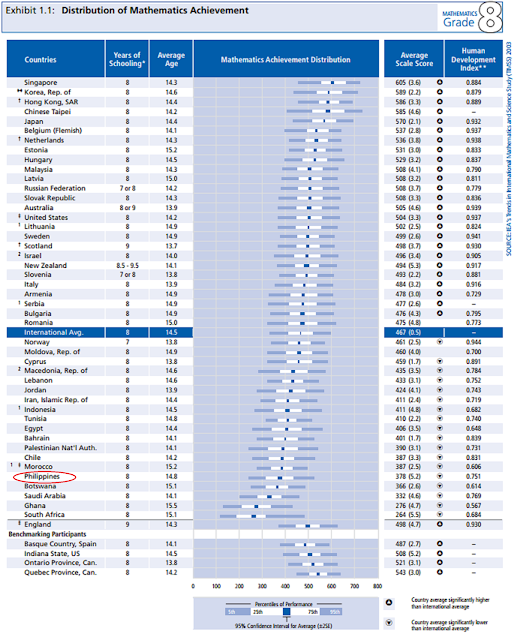 One should note that not only the age but also the number of years of schooling across the countries participating in this exam is uniform. These are valid comparisons yet DepEd's K to 12 focuses on adding two years at the end of high school. This is not where the problem lies.

Second, the "personal" dimension of the education of course belongs to the teacher. Yet, the Aquino administration has not responded positively to the call of teachers for a salary increase. Fe Hidalgo laments in a column on the SunStar Davao:


There is the unending clamor for increase in the teacher s' salaries but nothing has been given to date. Again there are billions to finance BBL but none for the teacher's salary. Teachers can hardly meet their family needs for a decent daily living.

Never mind the Bangsamoro Basic Law (BBL), K to 12 alone costs billions but offers nothing to raise teachers' salaries. Worse, next year's implementation of K to 12 is expected to cause unemployment among college instructors and staff. It is therefore truly disheartening that all the government could say in defense of the K to 12 law is that the petitioners have no legal standing to question the law before the Supreme Court.

Evidence should count in any decent court.