Do Different Tracks in Education Lead to Differences in Intelligence?

June 02, 2015
DepEd's K to 12 introduces different tracks in its senior high school years. The tracks share a set of fifteen core subjects but differ from each other in sixteen courses. Seven of these are applied or contextualized while the remaining nine are specialized for each track. The subjects assigned to each track are expected to contribute to the cognitive development of a student. Basic education affects a student's understanding, thinking, learning, speaking, and writing. These abilities are known to share a lot in common and comprise what is generally referred to as intelligence. When different tracks are introduced, it is therefore relevant to ask if different tracks lead to differences in intelligence.

There are only ten years of compulsory education in the German system but similar to DepEd's K to 12, it has tracks in its secondary education. Among the various tracks to be offered in DepEd's K to 12, it is obvious that the Philippine government is projecting a great majority of students being placed in the Technical-Vocational-Livelihood track. How vocational tracking contributes to employment is important to consider, and as cited in a previous post on this blog, data from various countries convincingly show that "vocational education and training offers no guarantee as a solution to youth unemployment".

Arvil Adams writing for the Education for All Global Monitoring Report makes the relationship between education and employment quite clear with a section heading in the paper entitled The Role of Skills Development in OvercomingSocial Disadvantage. It even comes with a graph to prove the point.


Vocational education and training offers no guarantee as a solution to youth unemployment. 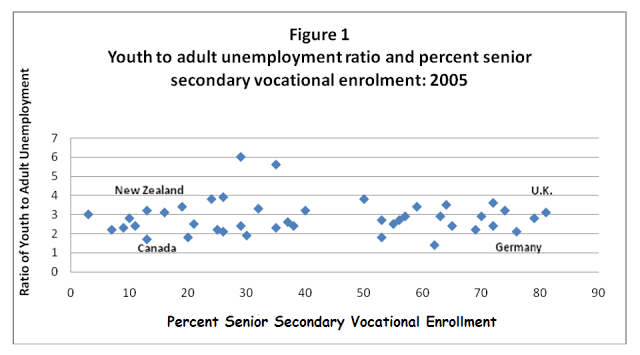 Germany, as shown in the above graph, enrolls a large fraction of its youth in vocational education, yet its youth to adult unemployment ratio is not significantly different from that of Canada. Whether vocational education can mitigate youth employment, however, is not the only issue. Vocational education is often perceived by the public as lower in quality compared to an academic one. Whether this perception is based on evidence warrants attention.

A group of German researchers have closely examined the difference in learning outcomes between academic and vocational tracks. The study published in the Journal of Educational Psychology  carefully employs a Propensity Score Matching (PSM) method to disentangle outcomes from the selection process. It is only natural to suspect that outcomes in a vocational track are already shaped by the selection process. Students are often assigned to tracks based on abilities, not just interests. With PSM, only those students that have the same propensity to either take an academic or vocational track are included in the study.

Academic-track schools do make students smarter not just because the students are already smart at the beginning. With PSM, the students being compared are not apples and oranges. Schooling does impact intelligence. The difference is not small and is evident and consistent with every type of matching algorithm.

The difference is about a half of a standard deviation. To help visualize this, Cohen gives the following description: "An effect size of 0.5 is described as 'medium' and is 'large enough to be visible to the naked eye'. A 0.5 effect size corresponds to the difference between the heights of 14 year old and 18 year old girls." If an academic track makes a student smarter, what can one say about the vocational track?