This is a repost from Bulatlat.com
MANILA – Without teachers, there would be no doctors, nurses, lawyers and even the president of the country. For public school teachers, a manifestation of gratitude is to show them their importance. But for the broadest alliance of teachers in the country, they are, instead, being neglected by the government.
While the Department of Education held a grand celebration of World Teachers’ Day on Oct. 5, which was held at the PhilSports Arena in Pasig City, members of the Alliance of Concerned Teachers (ACT) staged a protest action on the eve of World Teachers’ Day, Oct. 4.
Amid the heat of the sun, public school teachers marched from España Avenue to Chino Roces (former Mendiola) bridge, carrying banners “Rechannel pork barrel funds to education!” 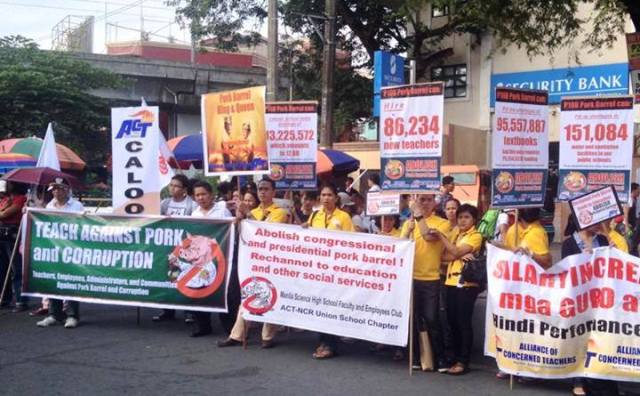 Public school teachers once again register their demands to the government for salary increase. (Photo by Anne Marxze D. Umil/Bulatlat.com)

“We are here to expose the real situation of public school teachers and the education system,” BenjieValbuena, national chairman of ACT, said.
“How can we celebrate Teachers’ Day if the government continues to neglect our long-time call?” Jocelyn Martinez, vice chairwoman of the ACT said during a program at the foot of Chino Roces (formerly Mendiola) bridge.
Dire situation of teachers
“As prime instruments of education and molders of young minds, teachers hold a special place in society.” Department of Education secretary Bro. Armin Luistro was quoted saying in a report.
But contrary to the statement of education secretary, teachers do not feel that they hold a special place in society. “Public school teachers are impoverished,” Valbuena said during the protest action.
“It is difficult to teach especially when there are distractions…The burden to make learning more exciting and interesting is on us, but how can we do it if the government does not even provide for our basic needs?” Valbuena added.
Teachers are known to be the kings and queens of loans and have mastered the art of doing business because of inadequate income. That is why when the ACT Teachers Party won a seat in the 15th Congress in Rep. Antonio Tinio, he immediately filed House Bill 2142, a bill that aims to upgrade the minimum salary grade level of public school teachers, in both elementary and high school levels, from Salary Grade 11 to Salary Grade 15. The bill, however, only reached first reading and was not discussed again in the committee for second reading.
“The bill was co-authored by 180 Congressmen. We had the support of legislators but the President did not mark the bill as a priority,” France Castro, secretary general of ACT told Bulatlat.com.
In the 16th Congress, Tinio once again filed a bill for the salary upgrading of teachers, as well as non-teaching personnel, House Bill 245 or an Act Increasing the Minimum Monthly Salaries of Public School Teachers to P25,000 ($579) and Non-Teaching Personnel to P15,000 ($347). The bill is pending with the committee level and a hearing has not yet been set.
The ACT Teachers Party has also pushed for the increase of PERA or the Personnel Economic Relief Allowance from P2,000 ($46) to P4,000 ($92) per month.
In a separate interview, Castro said modules for the K to 12 program are still incomplete. She also said the reported increase in classrooms and chairs is just an offset to the shortage of past years. “The number of students enrolling every school year is increasing; the ‘increase’ in chairs and classrooms are just to fill in the shortage should have been done a long time ago,” Castro toldBulatlat.com.
Contractuals 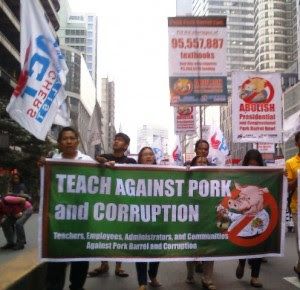 Public school teachers marching towards Paseo Roxas in Makati City for the second Million People March on Friday, Oct. 4. (Photo by Anne Marxze D. Umil/Bulatlat.com)
Teachers also denounced the contractualization of teachers in public schools.
Louie Zabala, ACT-NCR chairman said there are 50,000 contractual public school teachers nationwide. These teachers, Zabala said, are performing the same tasks, even working overtime but are receiving less.
Volunteer kindergarten teachers, according to ACT, are hired to handle a class of at least 11 to 30 pupils for a monthly allowance of P3,000 ($69). Locally-paid teachers or teachers hired by the local government units earn around P275 ($6.27) per day or P5,000 ($115) per month. Instructors on contracts of service or job orders earn around P8,500 ($196) a month. Contractual teachers are also denied benefits such as PERA, Cost of Living Allowance (COLA), Representation and Transportation Allowance (RATA), mid-year bonus, productivity incentive, Christmas bonus and cash gifts. They do not enjoy security of tenure, and coverage by the Government Service Insurance System (GSIS).
Teachers suffer from low wages, stretched hours of work and heavy teaching loads. Teachers are also being victimized by the inequality in the Performance Based Bonus (PBB).
“The President said, ‘You are my boss.’ This is nothing but a mere lie. He should have heeded our calls from the time he assumed the presidency if we are truly his boss. Worse, the Aquino administration reduced our benefits and changed it into a deceiving scheme,” LitoKalatag, president of Federation of Public School Teachers of Makati, said.
The teachers said when the government finally released the PBB, some received only P5,000 ($115) and some received P20,000 ($463). “Where is the equality if only performance will be the basis?” he asked.
Paul Rodriguez, a teacher at the Manila Science High School said he received P20,000 ($463) of PBB. “I am not happy about it because it only shows the inequality and divisiveness among our ranks.”
‘Scrap pork barrel’
Castro said that whenever teachers ask the government for an upgrade whether for salary or allowance, the reply they often get is “There is no budget.” “However, the lump sum money involved in the pork barrel scam, the discretionary funds of the President and the Disbursement Acceleration Program (DAP) show that there are funds,” Zabala said. 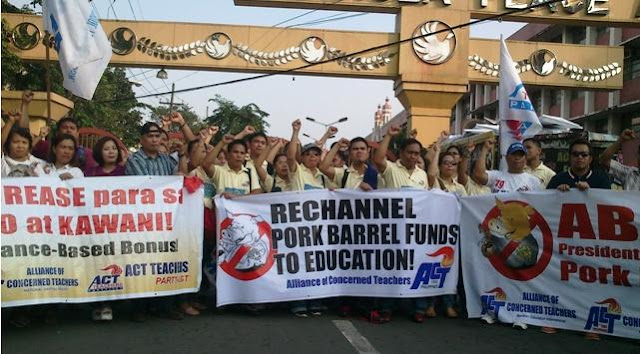 Photo by Anne Marxze D. Umil/Bulatlat.com
Jocelyn Martinez, deputy vice chairwoman of ACT said the 2014 national budget was hastily passed on second reading by Congress without an allocation for the increase in the salaries of teachers and non-teaching personnel.
Teachers also slammed the discretionary funds of the President. Tinio estimates that out of the entire 2014 national budget, Aquino set aside P964 billion ($22.334 billion) of lump sum funds subject to his sole discretion and not a single centavo was removed from it. Tinio countered that according to his rough estimates, the demand for pay increases is minute compared to Aquino’s P964 billion ($22.334 billion) pork.
“For example, increasing teachers’ minimum pay will cost government at least P5 billion ($115 million) more—an additional amount that will barely make a dent in Aquino’s pork,” Tinio said.
Teachers strongly support the call to abolish the pork barrel system. Teachers reiterated that the money stolen from pork barrel fund could have been used to fill in the perennial shortages in public schools in the country, which was further aggravated by the rushed implementation of the K to 12 program.
According to ACT, if the P10 billion ($224 million) amount from the pork scam were put in the education sector, the funding requirement for the 103,599 estimated gross shortages of teachers for fiscal years 2011 to 2012 which amounts to P17.18 billion ($385,719,712) could have been almost solved. It could have almost closed the 13,225,572 gross shortages in school chairs during the fiscal year 2011 to 2012 which costs about P12.9 billion ($289 million). Gross shortage of 151,084 water and sanitation facilities that requires an amount of P10.2 billion ($229 million) could have also been addressed. Shortages of textbooks, which are projected at 95, 557,887, only requires about P5.3 billion ($118 million) funding.
‘A call for teachers’
“Since teachers are the most powerful force for equity, access and quality education, a call for teachers means calling for quality education for all,” read in the Unesco’s website.
Valbuena said Unesco’s theme: “A call for teachers” is very timely particularly in the Philippines. “The theme is only right for us as we continue to struggle for our salary upgrade. That is our call and it is about time that the government heeds our call.”
“Quality education offers hope and the promise of a better standard of living. There is no stronger foundation for lasting peace and sustainable development than a quality education provided by well trained, valued, supported and motivated teachers.”
“How can we give quality education if the classrooms are small and jam-packed with students, the lack in ventilation still prevalent, and if teachers are leaving the country to seek jobs abroad?” Valbuena said. “Let us educate our co-teachers of the real situation and let us act together to change it.”