Languages in the Philippines: A Challenge for Basic Education

October 10, 2013
By 1987, all schools in Singapore are using English as a medium of instruction. Singapore's education policy however requires schools to offer a choice of Mandarin, Malay, and Tamil as the second language. This second language may also be used as the medium of instruction for social studies. The English language was seen as the unifying factor since no ethnic group in Singapore can claim ownership of English. Singapore also saw that English was becoming the language of choice in science and technology. Since 1990, the number of households speaking English in Singapore has risen:

The Philippines, on the other hand, has been changing its language policy for decades. Presently, there is even an online petition asking for the removal of the current chairperson of the Commission on the Filipino Language: 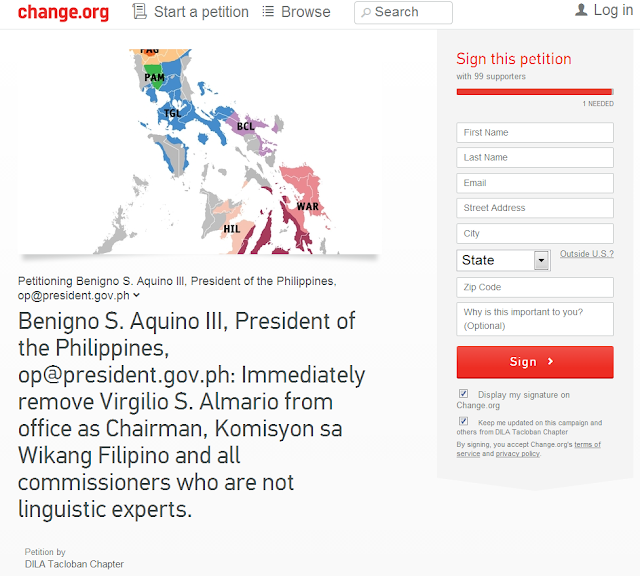 The situation in the Philippines is similar to that of Singapore. The new DepEd K+12 curriculum is embracing the Mother Tongue - Based Multilingual Education (MTB-MLE). Students in the primary years are taught all subjects (except Filipino and English) in their mother tongue. This is dramatically different from that of Singapore. The requirements, first of all, on teachers are more diverse. Teachers need to be able to teach math and science in the mother tongue of their pupils. Of course, not having science as a formal subject in the early years, teachers then do not have to worry about teaching science in the native tongue during the first few years of elementary school.

Singapore's approach is a lot more practical. Since the mother tongue is only taught as a language and culture subject, one need not worry about what mother tongue should be used in any given school. The choices are there and schools simply need to have a teacher or a group of teachers (depending on the demand) who can speak fluently and teach the mother tongue. Math and science teachers simply have to know how to teach their subjects in English. The school does not make a choice on what language should be used as the medium of instruction. This has practical aspects especially in a place where there is significant heterogeneity in languages. Take, for example, the following region in the Philippines:  (The following tables and figures shown here are copied from Jose Ramon G. Albert's (National Statistical Coordination Board, Philippines) article, "Many Voices, One Nation: The Philippine Languages and Dialects in Figures"

In the Cordillera administrative region (CAR), there are clearly five major languages, and these five account for less than 80% of the households. A school in this region needs textbooks in at least five different languages. A school in this region requires teachers who can instruct in these languages. CAR is not an exception, unfortunately. The following are other regions in the country demonstrating that even at the regional level, there is no homogeneity: 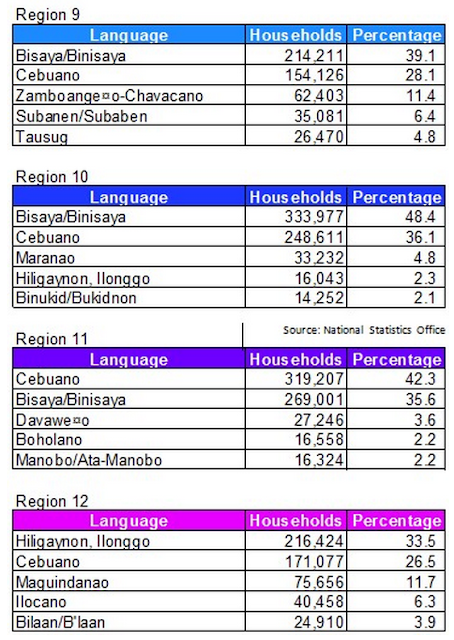 With this in mind, MTB-MLE is indeed a challenge. Currently, there are 19 languages considered by DepEd in its MTB-MLE implementation. These are enumerated by Albert in his article: Tagalog, Kapampangan, Pangasinense, Ilokano, Bikol, Cebuano, Hiligaynon, Waray, Tausug, Maguindanaoan, Maranao, Chabacano, Ybanag, Ivatan, Sambal, Aklanon, Kinaray-a, Yakan, and Surigaonon. The spellings of the names of these languages differ, but one should be able to see that 16 of these languages are among the top 20 languages spoken in the country in 2000: 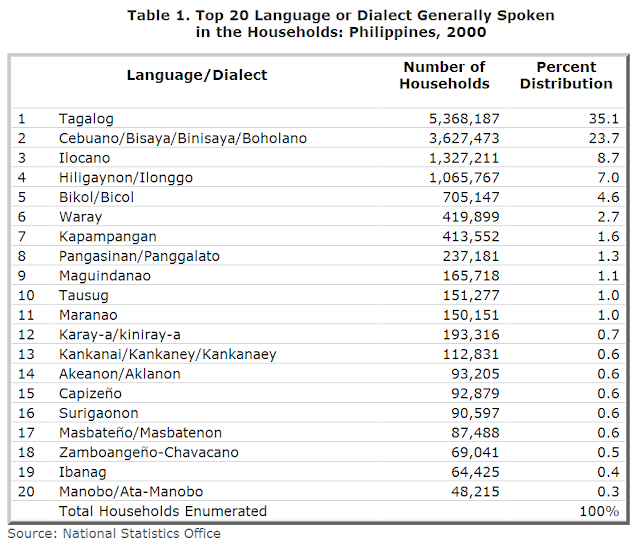 Ivatan, Sambal and Yakan are not among the top twenty, but these are included in the list of DepEd. This means Kankanai, Masbateño and Capizeño, although among the top 20 spoken languages, are not among those languages included in MTB-MLE of the DepEd K+12 program. Masbateño is a language spoken by a significant fraction of households in region 5: 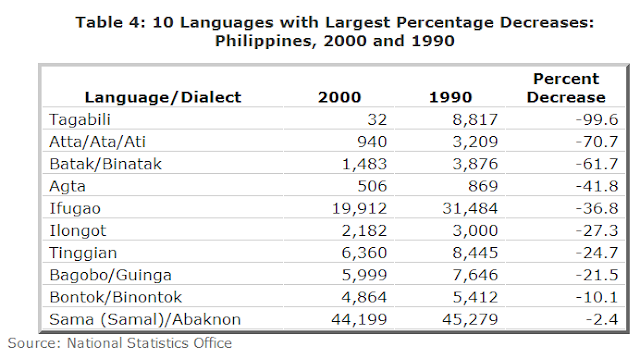 These languages are about to disappear. This is one reason why teaching the mother tongue as a subject in schools is important. It is to preserve a cultural treasure. Asking that a mother tongue be offered as a subject is asking a lot less than asking for a mother tongue to be used as a medium of instruction. MTB-MLE, because of its cost, can only select a fraction of the languages. Otherwise, it is prohibitive.

These are real issues that Philippine basic education faces. The country is indeed a colorful tapestry in terms of spoken languages as depicted in the following figures: 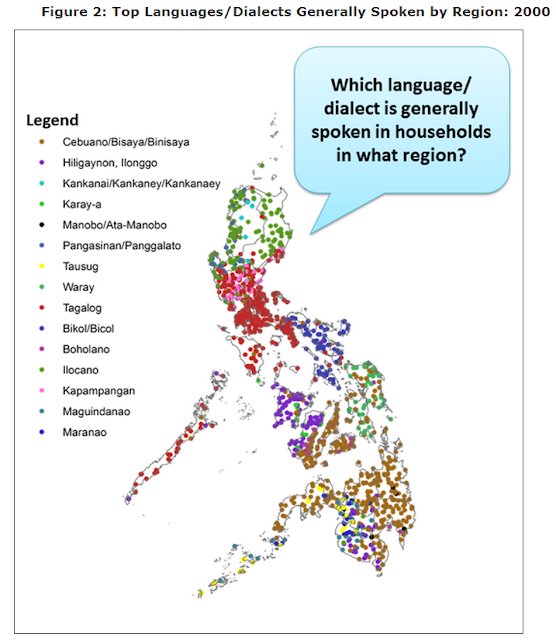 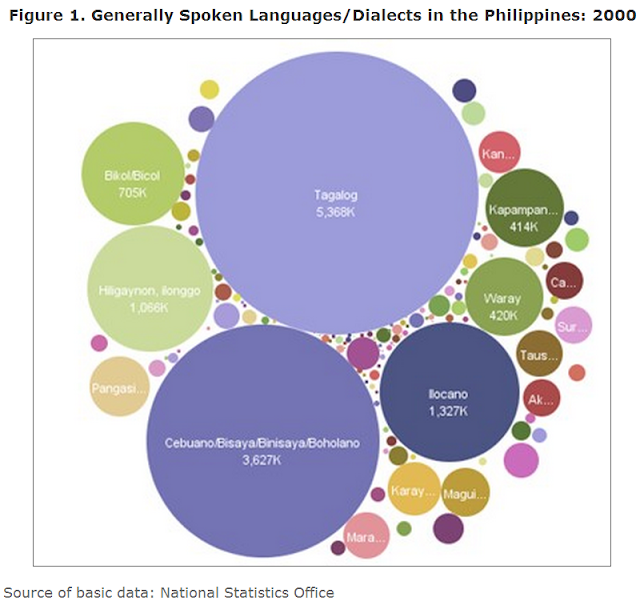 DepEd K+12 aims to teach students in the Philippines their mother tongue, English and Tagalog (Some call this language Filipino or the national language while some claim that the national language, Filipino is really a mix of the above languages). Looking at the above figure, one should not be surprised why such language policy in the Philippines still causes people to be angry.

It sounds good as a slogan. Unfortunately, this is simply impractical....