October 22, 2013
Fairfax county in Virginia is where my family lives. My son goes to Mason Crest Elementary School, a school in the county's public school system. The county is home to the 11th largest school division in the United States. It is also home to the largest fleet of school buses. With regard to quality of education, Fairfax County Public Schools are among the best. The following scores from the Programme for International Student Assessment (PISA) demonstrate that students in Fairfax county perform as well as the top ranking countries. Fairfax county scores are well above the average scores of students in the US.

One of the schools in Fairfax county, Thomas Jefferson High School, has the following scores: 625 (Reading), 680 (Math), and 625 (Science). Woodson, Oakton and Langley High Schools also had higher scores than Finland and Singapore, the two countries considered as top in basic education.

It is therefore troubling to see that the county is facing budget problems this year: 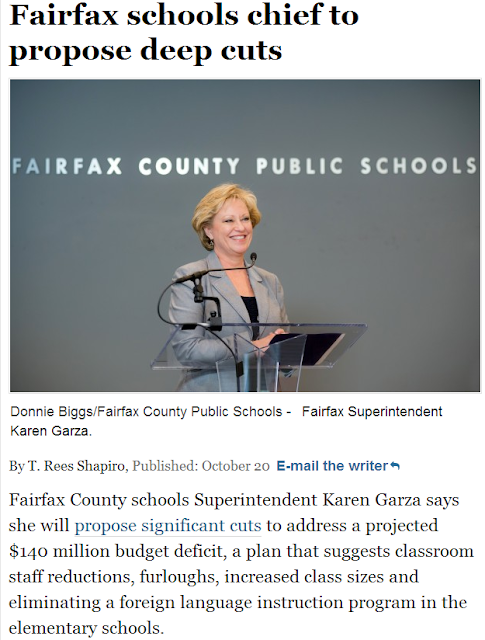 The proposed cuts are as follows (from the Washington Post):


And the above still does not add up to avoid the projected $140 million budget deficit.

The Fairfax County Public Schools web site offers an opportunity for its citizens to provide advice/suggestions on how to "Make Fairfax County Schools the Very Best It Can Be". And here are the popular suggestions:


The $140 million budget deficit is about 6% of the annual budget of the Fairfax public school systems. Looking at the above figure, if Fairfax county simply receives a fair share of Virginia's education budget, it is more than enough. The above chart shows that Fairfax county is in fact subsidizing the public school education for the rest of Virginia. This is not necessarily wrong. In fact, it is good that the county does not take that much from the state. In this manner, poorer districts are able to receive greater support from the state government.

Still, the proposed cuts may harm the Fairfax public school system. What do we have to do? What can we do? Before one answers these questions, the following reflection is helpful. While the rest of the country and the world are trying so many ways to have an educational system on par with those of Finland, Korea and Singapore, there is one county in Northern Virginia that has reached that achievement. The United States has spent over $15 billion just in the past eight years on tests, with very little to show in terms of improved education results. Education spending per pupil in Fairfax county is not exceptional. It is in the middle: 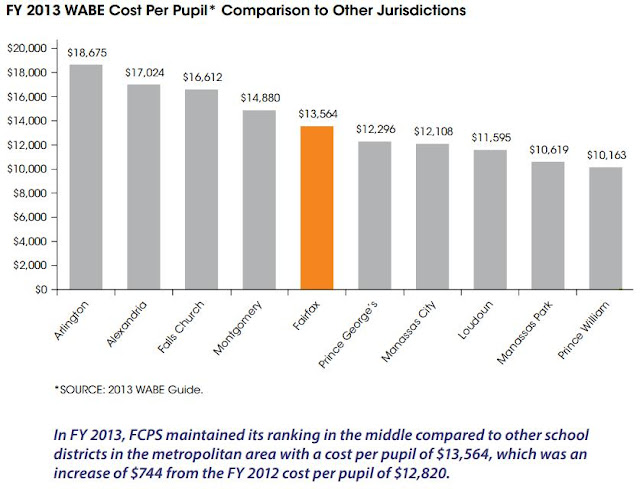 What Fairfax spends per pupil in 2013 is even smaller than what other states have spent in 2011:

Fairfax County Public Schools deliver results. With this in mind, the answer should be clear. Fairfax county residents can pay higher taxes. It is money wisely invested in the future of its children. Besides, it will save more than 1200 jobs and will ensure that students with special needs receive the attention and training they need. More than 1 in 4 students in the county qualify for free or reduced price lunch. There is poverty in Fairfax county. Sixteen percent of students do not have English as their mother tongue and about fourteen percent require special education. The county spends in a year about $15,000 per pupil in head start and $21,000 in special education programs. Thus. the average spending for a pupil in the general population is only $11,400. Teachers also have sacrificed enough. Their salaries are low compared to those of the neighboring counties while the cost of living in the area is equal or even higher. Quality education does come with a price.