Absenteeism in Preschool: Problems that Begin in the Early Years

October 24, 2013
Something is not necessarily better than nothing. This applies to early childhood education. Quality matters. A school environment and culture that fail to stimulate learning leads to a lack of engagement. Lack of engagement leads to an ineffective education. Absences even in preschool and the kindergarten years matter. Attendance in school is the first measure of a student's engagement. Missing even just one out of every ten school sessions can seriously deter learning. This applies not only to high school or the later years of formal schooling. The importance of attendance likewise applies to the early years. The University of Chicago Consortium on Chicago School Research (CCSR) has recently published a report illustrating the negative impact of absenteeism in preschool:

One of the main findings of the report is summarized in the figure below:

In all four learning areas, attendance in preschool appears consequential. The effects of missing school are even more dramatic with students who are starting with low skills prior to joining preschool. This finding certainly highlights why young children of disadvantaged groups in society needs perfect attendance. Obviously, it is not sufficient for these children to attend preschool only 80% of the time. Unfortunately, children who frequently miss school during the early years are these children, those who really need quality preschool education.

One major reason cited behind absenteeism in preschool is health. More than half (54%) provide the child being sick as the reason. This only highlights the importance of educating the children in preschool in a holistic manner. The reason behind the other half of absences is equally important to consider. According to the study, the other reasons boil down to lack of parent engagement. The study specifically states:


"The half-day programming not only presented logistical challenges, but also affected parents’ attitudes towards the importance of attendance—missing just two-and-a-half-hours did not seem too consequential."

In the article, "First Things First: A Commentary on K+12", I wrote:


Last but not the least (in fact, this point is crucial), the proposed K plus 12 curriculum also involves short school hours. This seems to be an attempt to enable multiple shifts in the schools. This goes against decongesting the curriculum. It likewise does not make it worthwhile for schoolchildren especially those who have to travel far to attend school. This also opens opportunities for child labor as well as greater environmental (outside of school) influences on children education. Elementary schools in the US are full day so that students do have time to cover the material and, at the same time, it allows parents to work and be more productive. A full day in school means less television, less video games, less time on the streets, and less other activities that do not contribute to a sound education of the young.

The Philippines' K+12 curriculum assigns three hours per day for kindergarten and four hours for first grade. Improving attendance requires the proper attitude toward schooling. We are much more likely not to miss things we deem are very important. Poor quality in early childhood programs do not send the correct message to parents. The following memo (DepEd Order 37 s.2011), for example, from the DepEd Philippines does not send the right message: 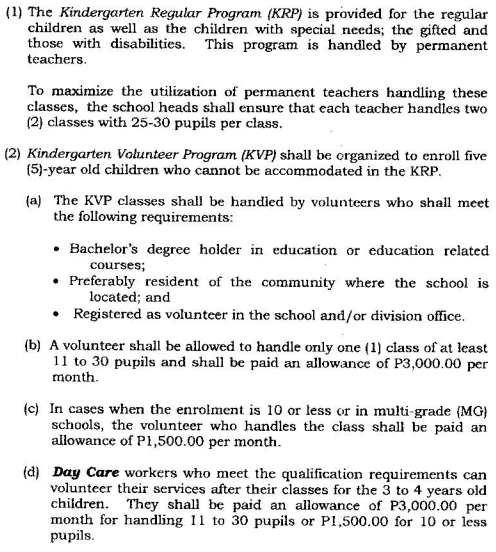 Something is not necessarily better than nothing....