Learning Gaps As Early As 18 Months

October 23, 2013
Since the early years, zero to five, are now known to affect brain development, education research and policies are now increasingly taking note of this stage in life. What studies have shown so far is that learning gaps begin to exist in these years. While this blog is strongly advocating attention to early childhood education, it is equally important to emphasize that learning is still a lifelong process. What happens between zero to five does not seal the future. Thus, before citing another article that demonstrates learning gaps in the early years, it maybe useful to recall words of Dr. Jack Shonkoff, dean of the Heller School of Social Policy and Management and professor of human development and social policy at Brandeis University:


Do you think there is a "myth of the first three years?"

It depends on what you mean by a myth. So if you ask me is it a myth that what happens in the first three years determines everything that happens afterward and the window shuts at age three? Absolutely that's a myth. It's just not true.

If you ask me whether the first three years are a very important time in which rapid brain growth is taking place and brain development is proceeding in a very rapid clip and that experiences really affect that development, and affect it in a very big and important way in the first three years? That's not a myth. That's the truth. That's science. It's absolutely true.

Shonkoff also has cautious take on early childhood intervention programs. The research shows that the early years are significant. However, there is little research supporting some of the interventions currently implemented. Shonkoff specifically states:


The problem is not whether early intervention is a good public investment. The problem is whether we invest in high-quality services that are shown to make a difference. And as we found in our report, although the science tells us interventions can be effective when they're administered early, effective interventions are not simple. They're rarely inexpensive, and they're not always easy to implement.

Shonkoff's works, in my opinion, emphasize the two sides of early childhood education: the child's health and the quality of the learning environment. Interventions are difficult to assess if these focus only on one side. The effectiveness of a learning environment can only be gauged if a child is free from emotional and physical stress, for example. Thus, early childhood education requires a holistic view. It is straightforward to see then that effective interventions not only include what happens inside the school, but also what happens inside the home.

A recent study has shown that learning gaps occur as early as 18 months. This study has a relatively small sample, 48 children, but the method applied is well designed. The study (Fernald, A., Marchman, V. A. and Weisleder, A. (2013), SES differences in language processing skill and vocabulary are evident at 18 months. Developmental Science, 16: 234–248. doi: 10.1111/desc.12019) has the following abstract:

This research revealed both similarities and striking differences in early language proficiency among infants from a broad range of advantaged and disadvantaged families. English-learning infants (n = 48) were followed longitudinally from 18 to 24 months, using real-time measures of spoken language processing. The first goal was to track developmental changes in processing efficiency in relation to vocabulary learning in this diverse sample. The second goal was to examine differences in these crucial aspects of early language development in relation to family socioeconomic status (SES). The most important findings were that significant disparities in vocabulary and language processing efficiency were already evident at 18 months between infants from higher- and lower-SES families, and by 24 months there was a 6-month gap between SES groups in processing skills critical to language development.

The paper shows the following figure to highlight the gap between children coming from families of different socio-economic status: 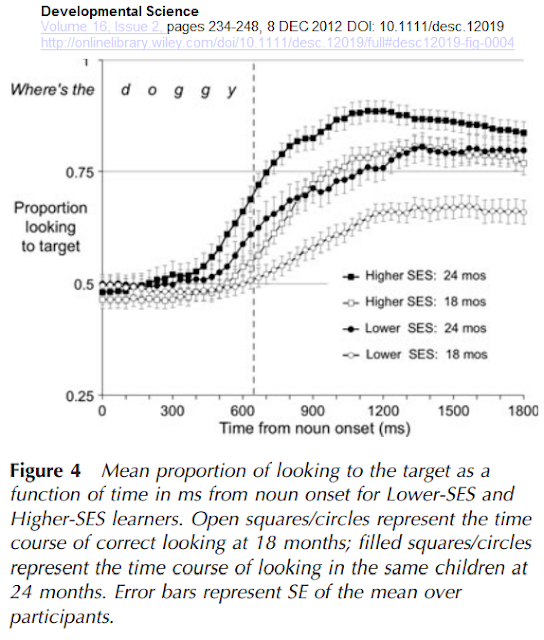 Where's the doggy? The scientists then measured how long it takes for a child to look correctly. Children who are 18 months old from middle class families can spot the target as early as six tenths of a second. Children from poor families achieve this performance only at 24 months. The experiment shows a 6-month language gap as early as two years old.

Parents and caregivers need to talk with their child....