Standardized Tests: What They Really Are

October 28, 2013
A standardized test is an examination that is given under well defined conditions. Its results are supposed to be interpreted in a consistent manner. Students are asked the same questions. The results should not be dependent on the grader of the examination. For this reason, standardized tests are usually composed of multiple choice questions. Standardized tests meant to measure learning in a given discipline at a defined level of schooling must strongly correlate with each other.

During my final year in high school, I took several tests, admission tests for Ateneo and the University of the Philippines, National Science Scholarship test, State Scholarship test, and the National College Entrance Examination. Too many tests - that was all I could remember. These tests told the same story about me. Luckily I was not under the weather when I took any one of these exams. Otherwise, an exam I took on a day I was sick might have yielded a different result. In essence, since these exams were standardized I really needed only one.

Clearly, standardized tests can be related to one another. The international exams like Trends in International Mathematics and Science Study (TIMSS) are examples of standardized tests. Clearly, this particular exam is quite expensive to administer to all students. A developing country like the Philippines would dig quite deep into its education budget to have its students participate in this exam regularly. The Philippines, however, has its own National Achievement Test. A previous post in this blog, "The National Achievement Test in the Philippines", shows results from various years within 2004 to 2012. The results from these exams do not really tell a different story from the one revealed by the few instances the Philippines participated in TIMSS, which is likewise highlighted in a previous post, "Role of Higher Education". Seeing that there has not been that much of an improvement in the National Achievement Test scores, it may be inferred that if students in the Philippines take the TIMSS this time, the results would be as bad as ten years ago.

Linking standardized exams is a very useful exercise. It allows to see the results of exams that have been administered at a wider scale locally to results of exams that are global. This linking, for example, has been done by the National Center for Education Statistics (NCES) in the United States. The two tests that have been linked are TIMSS (international) and the National Assessment of Educational Progress (NAEP). The NAEP is administered in all states, allowing for the scores to be evaluated state by state while the TIMSS measures the average performance across the entire nation. TIMSS therefore does not have state by state information. By establishing the relationship between these two exams, the NCES has been able to convert NAEP scores for each state into scores in the TIMSS. This makes it possible to see how each state performs compared to the rest of the world. The results published by the NCES in its report, "U.S. States in a Global Context: Results From the 2011 NAEP-TIMSS Linking Study", are summarized in the following maps or figures: 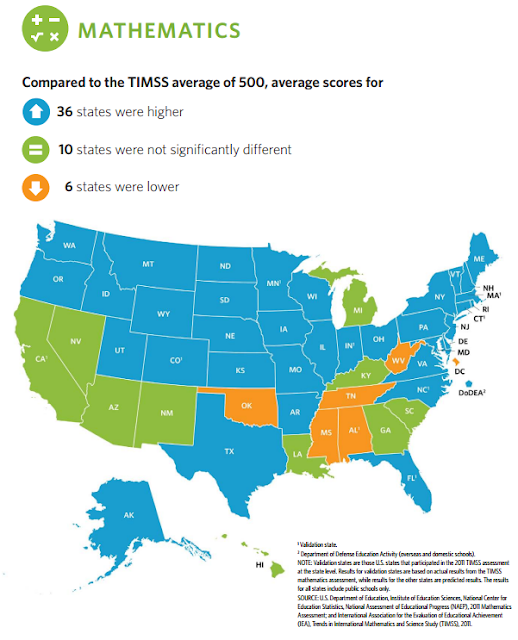 One quick look at the above maps gives the impression that most states are blue. Most states are above average compared to the rest of the world. Two states, Mississippi and Alabama, appear to be not performing well in both Math and Science. In general, the southeastern states as well as those in the southwest are not doing as well as the states in the north. The maps above illustrate how much information is missing in assigning just one score for the entire United States of America. The average score does not do justice to the states that actually do quite well.