Technology and Mental Well-Being of Children

September 16, 2013
"We are taking a BYTE out of our new Apple iPads! We are hungry for learning!" This statement accompanied a post on Facebook by a daycare in Nashville. The post was a photo of toddlers with their eyes glued on IPads, as reported by The Atlantic in "Discovering That Your 18-Month-Old Is Using an iPad in Pre-School". One of the parents who discovered the use of IPads decided to pull their son out of the preschool. Like most parents, I likewise question whether screen time benefits or harms young children.

I did not grow up with these gadgets. The only screen available then was the television. But even with a television, one would be hard pressed to find programs that would be of interest to young children then. When I was in high school, there was an animation that caught the interest of a lot of children, Voltes V:

It was shown every Friday afternoon and each episode was half an hour long. I was among the young minds captivated by the show. I remember being very sad when Philippines president Marcos banned it. In addition to Voltes V, there were the other shows Mazinger Z and Daimos but Marcos likewise stopped the airing of these other shows.

In medicine, before a drug is approved, it undergoes rigorous clinical trials. Part of the experiments evaluates how effective the drug is, but another important investigation evaluates its safety. The same must apply to what we provide to children. With regard to time on a screen (television, videos, video games, internet, social media, smart phones, and tablets), it is necessary to examine not just the benefits but also the harm technology might bring to our children. One aspect that is hypothesized to be crucial is the length of exposure to these activities. Thus, it is only prudent to ration the time we allow our children to watch television or videos, surf the internet, play video games, read and write emails, participate in chat sessions, and browse social media. But exactly how much is too much - this is the important question to address.

Research addressing this question is challenging. Each time the well-being of a child is involved, serious ethical considerations are present. Well designed experiments are often impossible to perform especially when risks are high. Hence, studies in this field usually settle with statistics and correlations. One example of such study is "Electronic screen use and mental well-being of 10–12-year-old children" published in the European Journal of Public Health: 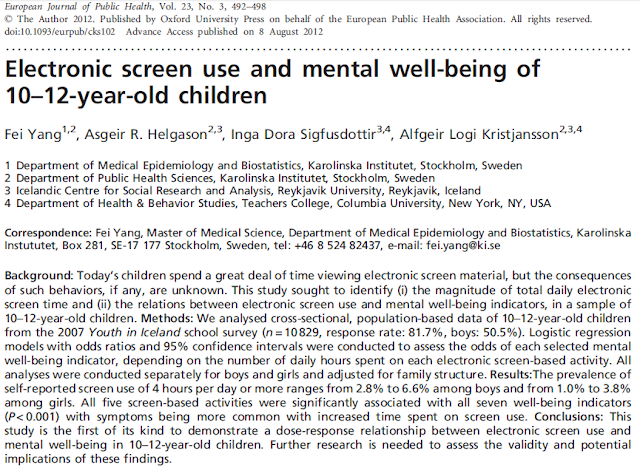 In the above study, the well being of 10-12 year-old children is evaluated using the following indicators:
Electronic screen use is divided according to the following types:
Children are divided according to the average time spent in front of the screen for each of the above activities. The participants are 10-12 year-old children in Iceland. The study, as described in its abstract, is an analysis of cross-sectional, population-based data of 10–12-year-old children from the 2007 Youth in Iceland school survey (n = 10 829, response rate: 81.7%, boys: 50.5%).

All mental well-being indicators strongly associate with all types of electronic screen use. Four hours or more on any one of these screens results in a child being two to four times more likely to say "yes" to all of the above seven mental well-being indicators. The strong correlation is impressive as it holds across all types of screen use and across all mental well-being indicators. Of course, as the authors note in their conclusion, these are only correlations and not a clear demonstration of a cause and effect relationship. It is likely that children who have poor mental well-being resort to longer screen use. Still, the strong association between poor mental health and screen use exists. With this in mind, it is clear that rationing exposure to screens is indeed prudent. This rationing should not be limited only to the times spent inside a child's home. When screens are increasingly permeating classrooms and libraries in schools and preschools, these exposure times likewise need to be counted.