Addressing Problems in Basic Education Inside the Womb

September 20, 2013
In Diane Ravitch's new book "Reign of Error", the first proposed solution comes in Chapter 22, Begin at the Beginning. With this suggestion, Ravitch illustrates a perspective that places education as a goal and not as a means. This is a very useful frame of reference since it does make the objectives a lot clearer. Trying to solve education problems while aiming to use education as a means to solve other problems can be very confusing. Do we improve education to solve economic problems or should we address first the economic problems that lead to poor education? The latter approach is more likely to succeed simply because it attacks the problem at its root.

The following table, copied from the Lancet (H. Blencowe et al., National, regional, and worldwide estimates of preterm birth rates in the year 2010 with time trends since 1990 for selected countries: a systematic analysis and implications, The Lancet, Volume 379, Issue 9832, 9–15 June 2012, Pages 2162-2172) provides a list of the top ten countries ranked according to the number preterm births: 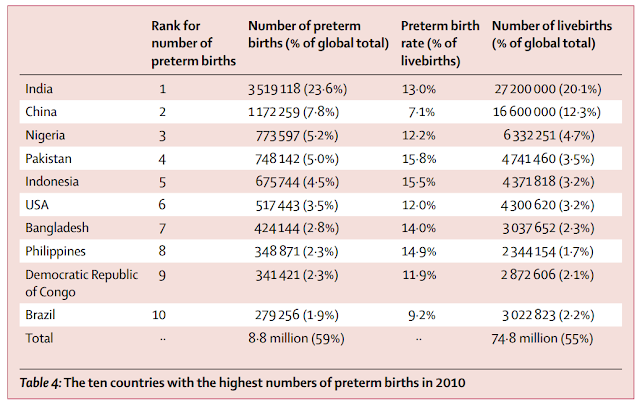 It is seldom that we find both the Philippines and the United States of America in a table of "Top Ten", but here is one rare example. This table says what it says. It is different from test scores where doubts can be raised regarding the validity, appropriateness and accuracy of the test materials. What is worth nothing here is that there are no countries that perform very well in international standardized exams in this list. Finland, Singapore, South Korea, and Canada are not on this list. The correlation between learning outcomes and what happens inside the womb is indeed especially striking.

Preterm births, of course, are strongly associated with low birth weight (less than 5 lbs. 8 oz.). There are numerous studies that examine how low birth weight affects brain development as well as cognitive abilities. The following figure extracted from an infographic from the Urban Child Institute demonstrates how early intervention programs which include both parental counseling as well as early education programs can help:

The obvious thing that Ravitch points out in her book is that why should society wait for the problem and apply costly interventions when it is possible to address the problem inside the womb. Preterm births and low birth weight can happen due to a variety of reasons. But one common cause (which applies likewise to a rich country like the United States) is the health of the pregnant mother. For this reason, prenatal care which includes the following (Ravitch cites recommendations from the March of Dimes) is suggested:

The March of Dimes report has specific recommendations. They include well-constructed programs to improve nutrition, family planning services, and health education and to reduce substance abuse, sexually transmitted diseases, and exposure to environmental pollution.

Preterm birth and low birth weight are problems. Trying to address these by changing curricula or adding two years of high school somehow misses the point. The problems at the beginning need to be solved at the beginning since later interventions are costly and oftentimes, ineffective.

Preterm birth and low birth weight affect basic education outcomes. There is ample research showing how low birth weight is associated with brain development as well as intelligence quotient (IQ). One example even manages to perform a near-experimental model: examining identical twins. The study, published in the Proceedings of the National Academy of Sciences, USA, by Raznahan and coworkers, first looks at identical twins to examine the relationship between birth weight and cognitive development. The study finds:


Here, we combine the power of a within monozygotic twin study design with longitudinal neuroimaging methods that parse dissociable components of structural brain development between ages 3 and 30 y, to show that subtle variations of the in utero environment, as indexed by mild birth weight (BW) variation within monozygotic pairs, are accompanied by statistically signiﬁcant (i) differences in postnatal intelligence quotient (IQ) and (ii) alterations of brain anatomy that persist at least into late adolescence. Greater BW within the normal range confers a sustained and generalized increase in brain volume, which in the cortical sheet, is speciﬁcally driven by altered surface area rather than cortical thickness.

In simpler terms, the baby born with a heavier weight among the identical twin has a larger brain volume and a higher IQ. This difference persists up till the end of high school. With this in mind, it should now be clear why Ravitch writes the following in the chapter Begin at the Beginning:


...This is an excellent place to begin a genuine program of social reform. The research is clear . The need for action is clear. The short-term and long-term benefits are clear. There is a widespread consensus on how to address and remedy the problem....

It is clearly wrong to think that a spiral curriculum, an inquiry-based approach, mother tongue based - multilingual education, no fomal subject of science in the early years, and adding years to high school can address problems in education the Philippines faces if some of these problems are due to preterm birth or low birth weight. It is likewise a fallacy to think that education is the best weapon against poverty. Evidently, the effects of poverty on education need to be mitigated first.