September 21, 2013
The kindergarten curriculum of Philippines is guided and inspired by recent research and findings on early childhood education. That is the good news. Unfortunately, this is not the entire story. The Philippines is currently unprepared for a proper implementation. A curriculum (how and what to teach) can only be as good as its implementation. Quality matters in early childhood education. In this area, just having something is not necessarily better than nothing. Simply endowed with the correct vision is not adequate for only realization can make the difference.

A board member from the province of Negros Occidental in the Philippines was quoted in a news article saying:


What is also alarming is the fact that this is a nationwide dilemma of DepEd. Before they fully implement K to 12 they have to address further preparations for parents and students (adjustment) and prioritize budget for additional teachers.

Much of the above concern centers on the fact that a significant number of kindergarten teachers under the DepEd's K+12 program are volunteers receiving as little as 3000 pesos (about US$75) per month. On top of this, kindergarten classes can have as many as 25 pupils and facilities as well as resources are often lacking.

Sadly, this is still not the full story. Early childhood education research in developed countries usually pertains to preschool age (younger than 5 years old) and not kindergarten. The following is a slide I copied from a presentation made by Rosemary Geddes and John Frank entitled, "Measuring Early Child Development in Scotland: Introducing the Early Development Instrument": 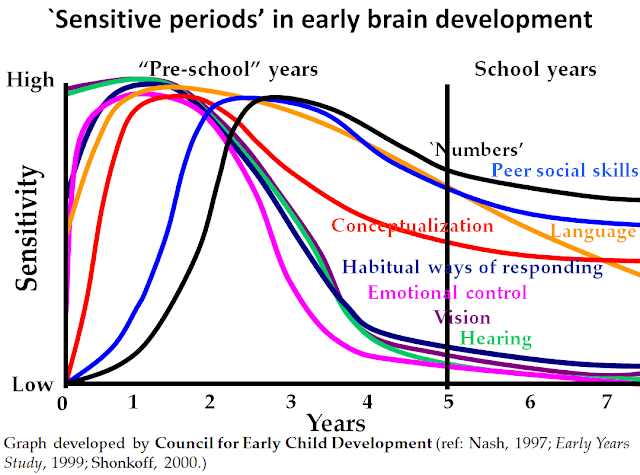 It is clear from the above figure that in developed countries, early childhood education refers to years before kindergarten. The years 2-5 are marked with a higher sensitivity of the brain to learn language, numbers, social skills, and conceptualization. These are the years that Diane Ravitch refer to in one chapter of her book Reign of Error. These are the Early Years that Count (Chapter 23):

Missing these years and simply applying these principles in kindergarten is actually playing catch up.

Society has dramatically changed in the past three decades. I did not go through preschool. In fact, I did not even attend kindergarten. Of course, early childhood education does not have to occur in a formal school setting. Mine happened inside our home. My case was purely anecdotal and might not apply in general. I might not have so many toys but one weird thing about our house then was it had a blackboard with pieces of chalk. Maps of the world as well as the Philippines could also be found on the wall, as well as portraits of national heroes and past presidents. So, right inside our home, I had math, reading, writing and social studies. Our house was a bit strange.

My mother also completed an elementary teacher's certificate from the Philippine Normal College. Thus, she knew something about teaching young children  in spite of not actually working as a teacher in any school. She must have some rough idea at least of what and how to teach young children. My older sister (two years ahead of me) also went to kindergarten. At that time, she came home with some school work. I therefore had the opportunity to see what she was doing in school and oftentimes, I was likewise able to experience what she was going through. Except in my case, it was really all fun since I was neither being tested nor graded.

Quality early childhood education does count. It did for me and I have to thank both my older sibling and mother for it.