September 06, 2013
The education chief of the United States of America, Arne Duncan, advocates a later start in the school day: "There’s lots of research and common sense that lots of teens struggle to get up ... to get on the bus." ("Education Chief: Later Start in School Day Could Help Teens", Philip Elliott, Associated Press). The school district where I live, Fairfax county, has commissioned the Children’s National Medical Center’s Division of Sleep Medicine in June of this year to develop a plan to delay high schools’ start time to 8 am or later. My son, who is now attending an elementary school, gets on the school bus, about 10 minutes before 9 am. His class starts at 9 am. Public high schools in Fairfax currently start at an earlier time, 7:20 am. A later school start of course aims to increase the length of time a child could sleep. This is then followed by the hypothesis that "rested students are ready students". Secretary of education Arne Duncan adds that this idea is now backed by research. 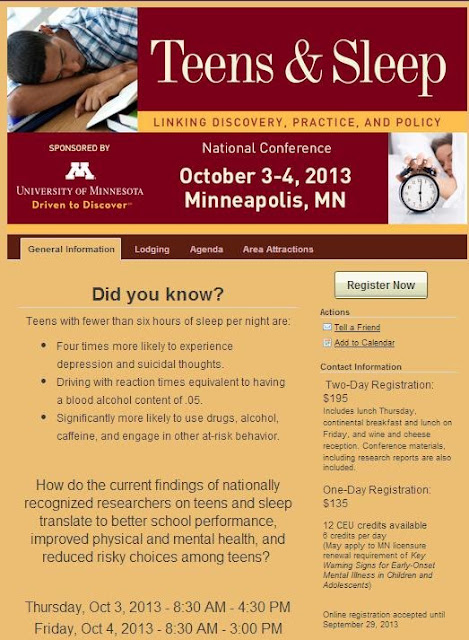 Early this year, Daniel T. Willingham, professor of cognitive psychology at the University of Virginia, has this to say in the American Educator:


Question: Some of my students seem really sleepy—they stifle yawns and struggle to keep tired eyes open—especially in the morning. This can't be good for their learning, right? Is there anything I can do to help these students?

Answer: Sleep is indeed essential to learning, and US teenagers (and teenagers in most industrialized countries) don't get enough. Although recent work shows there is a strong biological reason that teens tend not to sleep enough, there is some good news in this research. First, the impact on learning, although quite real, does not appear to be as drastic as we might fear. Second, the sleep deficit teens tend to run is not inevitable; with some planning, they can get more shuteye.


Due to the unique demands of the adolescent years, sleeping for 9 hours a day is advised. The average sleep time for teenagers in the United States falls short, as reported in the Journal of Adolescent Health: 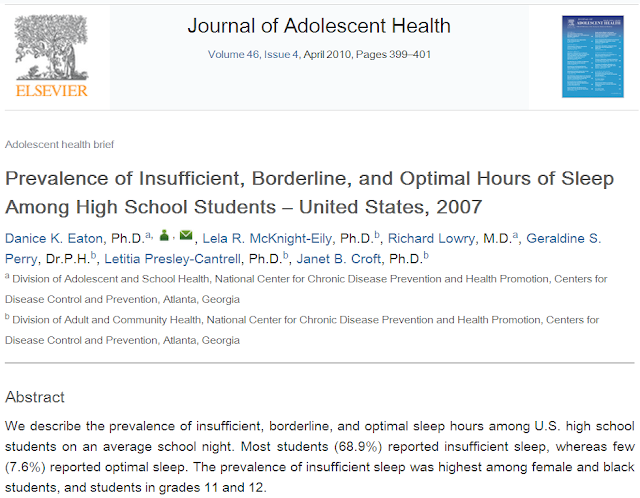 Insufficient sleep in the above study is defined as 7 or less hours of sleep, while optimal is 9 or more hours. The time school starts is given as one reason by this study for why high school students are not getting enough sleep. The study also cites a study by Kyla Wahlstrom, Director of the Center for Applied Research and Educational Improvement (CAREI) at the University of Minnesota. Wahlstrom who has been working in this area for almost two decades has found "that schools that want ready students must have students arrive rested. Absenteeism, tardiness, depression, obesity, dropout rates and even auto accidents all decline when students get a good night of sleep." Willingham is correct in stating that the effects of sleep deprivation on learning is not as disastrous as one may expect. Part of the reason is the inability to perform a well-controlled study to investigate the influence of sleep on cognitive skills. It is highly unlikely to find a parent who would be willing to prevent a child from sleeping for a scientific experiment. As noted by Wahlstrom, sleep deprivation may not only affect learning, but also comes with other undesirable consequences. Therefore, most studies are confined within statistics and surveys hoping to find a correlation between quality of sleep and learning. The difficulty in these studies arise from the fact that there are other factors that come into play. Joseph Buckhalt and coworkers have found that race and socioeconomic factors act as moderators of sleep effects on cognitive functioning. For example, in "Children's Sleep and Cognitive Functioning: Race and Socioeconomic Status as Moderators of Effects", these researchers state, "Race and socioeconomic status (SES) moderated the link between children's sleep and cognitive functioning. One hundred and sixty-six 8- to 9-year-old African and European American children varying in SES participated. Sleep measures were actigraphy, sleep diaries, and self-report; cognitive measures were from the Woodcock–Johnson III and reaction time tasks. Children had similar performance when sleep was more optimal, but after controlling for SES, African American children had lower performance with sleep disruptions. Children from lower and higher SES had similar performance with better sleep quality and less variability in sleep schedules, but when sleep was more disrupted, higher SES children had better performance. Examination of environmental variables associated with race and SES that may underlie these effects may lead to directions for interventions to improve cognitive performance." Children from poor families are more adversely affected by fewer hours of sleep. In the same paper, Buckhalt et al. likewise have this to say:


"Most sleep deprivation experiments comparable to those that have been carried out with adults are not ethically appropriate for children, but a few studies have experimentally restricted sleep and measured subsequent cognitive performance. Initial studies restricted or extended sleep for one night and showed that restricted sleep was associated with poorer performance for some, but not all, expected tasks (Fallone, Acebo, Arnedt, Seifer, & Carskadon, 2001; Randazzo, Muelbach, Schweitzer, & Walsh, 1998). Two subsequent studies have involved experimental manipulation of sleep over longer periods. Sadeh, Gruber, and Raviv (2003) had children restrict or extend their sleep for 1 hr over three nights and measured cognitive functioning with the Neurobehavioral Evaluation System. Children who extended their sleep had improved post intervention performance on two of nine measures derived from six tasks: digit memory forward (but not backward) and reaction time (RT) on the Continuous Performance Test. Additionally, for simple RT, the performance of the sleep-restricted group declined, while that of the sleep-extended group remained stable. Fallone, Acebo, Seifer, and Carskadon (2005) used a within-subjects design with 1 week of baseline, 1 week of sleep restriction, and 1 week of sleep optimization to show that children whose sleep was restricted were rated by teachers to have more academic problems compared with baseline and optimized conditions, and more attention problems compared with the baseline condition."

Although evidence from research is not that strong on how sleep affects learning in children and adolescents, a correlation exists between quality sleep and academic performance. Still, sleep deprivation among adolescents should not be confined to academic measures. Lack of sleep affects mood, behavior and health. Adolescents should be given the opportunity to get their physically required sleeping hours.

The next question is whether later school starts can indeed help. A concern is that later school starts may just encourage adolescents to even stay awake later at night. Studies indicate, however, that this is not the case. The reason why teens tend to lose hours of sleep is the change in the levels of the hormones, melatonin and cortisol, during the adolescent years.  Cortisol, the hormone associated with wakefulness, starts very high in the morning and drops dramatically in the late afternoon hours in young children. This does not happen to adolescents. Adolescents therefore find it more difficult to fall asleep at night and wake up in the morning. (Elizabeth A. Shirtcliff, Amber L. Allison, Jeffrey M. Armstrong, Marcia J. Slattery, Ned H. Kalin, and Marilyn J. Essex, "Longitudinal Stability and Developmental Properties of Salivary Cortisol Levels and Circadian Rhythms from Childhood to Adolescence," Developmental Psychobiology 54, no. 5 (2012): 493–502.). With this evidence, it is clear that a later school start can help.

So why not? School bus transportation could be one hindrance. A later schedule overlaps with the other grades - therefore, additional buses and drivers are needed. Afternoon activities are likewise pushed to later times and during winter, these could easily be pushed past sunset. Still, the benefits of a later school start can be dramatic, if we are to assume that the following findings from the Air Force Academy is transferable: 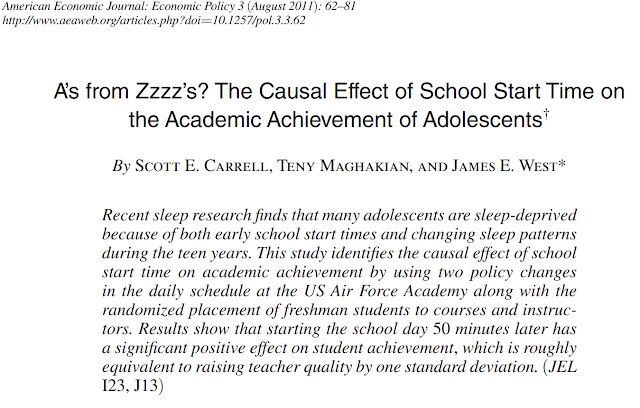 "50 minutes later is equivalent to raising teacher quality by one standards deviation." This is very significant.