Which Scientific Findings are Applicable to Basic Education?

November 28, 2012
I recently read a commentary by Dr. Leonardo L. Leonidas, "Jump-starting our kids' math ability" on the Philippine Daily Inquirer. The commentary made the following claim:

Chinese children in grade school and high school are more advanced in counting and in math. There are many reasons for this fact, and one big advantage of Chinese children is their language.

By far, their language depicting numbers is simpler. The Chinese have only 10 one-syllable words that can be used in combination to form higher numbers. From one to 10, the words are: yi (one), er, san, si, liu, wu, qi, ba, jiu, and shi (10).

In English, there are 29 words needed to express numbers. Many of the English word numbers are even of two syllables, such as seven, fourteen, sixteen, etc....

Well, here is my reaction.

My son is currently in first grade and some of the activity worksheets we use to teach him addition and subtraction look like the one below: 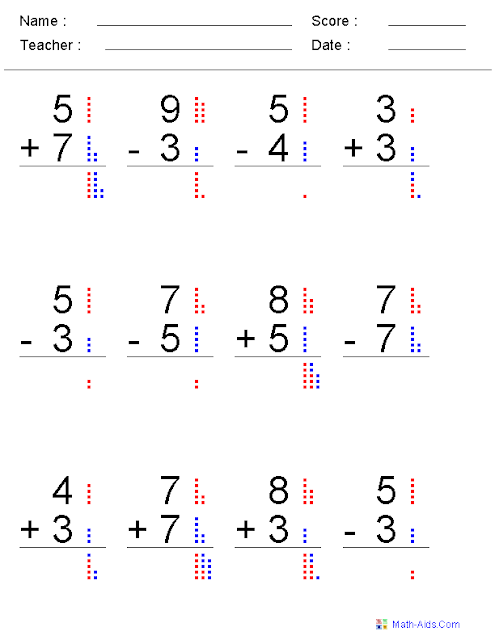 Except for the header of the above activity sheet, there are really no English words. Arithmetic is really taught using Arabic numerals. In this particular sheet, red and blue dots are shown to aid in counting which helps children add and subtract numbers. Of course, if the activity sheet is read aloud, then English words (or words from the medium of instruction) will enter the scene. Doing the activity in silence clearly places a minor or even a non-existing role for language. Associating each Arabic numeral to its corresponding English word seems easy enough for children to grasp. Children in the kindergarten class where my son attended this past school year do not seem to have any problem counting up to twenty, for example. On the other hand, addition and subtraction seem to feel much more challenging at the moment.

We do find articles in mainstream media that highlight scientific findings. Most are in health since that subject seems to be a topic of great importance or interest to a wide audience. Once in a while, we stumble upon items that relate to education. The presentations in these popular articles differ greatly from how the scientific finding has been presented in a peer-reviewed journal. Oftentimes, the language used is more liberal and popular, in other words, less accurate and precise. Thus, to get the most out of reading these articles, a critical mind and experience in science are both required.

There are resources on the internet that can help us navigate through the vast array of scientific claims on how to improve education. This blog, for example, has found an excellent source that does exactly what is needed to sift through these claims and findings: It is another blog, the blog of Virginia psychology professor Daniel Willingham: "The Science and Education Blog". This is not the first time his ideas are being cited in this blog. The following are past posts that have mentioned or highlighted Willingham's works:


What Does Science Tell Us About Teaching Kids to Think?
Oct 20, 2012
What Does Science Tell Us About Teaching Kids to Think? This is the same title of an article that came out in The Atlantic early this month. It was written by University of Virginia psychology professor Daniel Willingham.
Philippine Basic Education: DepEd K to 12: "Must Have" versus ...
Jul 29, 2012
Professor of Psychology Daniel Willingham at the University of Virginia arrived at an excellent analogy to describe the teaching profession. Teachers are neither scientists nor artists. Architects are a much closer comparison.
Philippine Basic Education: "Philippines Losing the Best and ...
Nov 19, 2012
Daniel Willingham, a psychology professor at the University of Virginia, recently cited new research re-confirming what so many of us have known all along: Math and science teachers leave the profession at or around the ...
Professor Daniel Willingham has written numerous articles on the magazine American Educator of the American Federation of Teachers providing timely and relevant discussions of issues affecting basic education:

How to allocate study time
Why transfer is hard
Why students remember or forget
Why students think they understand when they don't
Why practice is important
Why people love and remember stories
Why knowledge is important
How to teach critical thinking
Why reading comprehension strategies are less useful than most people think
What will improve a student's memory?
What goes into mathematical thinking?
Motivation--role of praise
Motivation--role of rewards
Has technology changed how students think?
Can teachers increase students self-control?
Why does family wealth affect student outcomes?

There are so many more articles on his blog, and for a preview, here is Willingham's most recent article; (It shows where I got an idea on what to use to convey an "unimpressed" response)


.
An op-ed in the New York Times reported on some backlash against inaccurate reporting on neuroscience. (It included name-checks for some terrific blogs, including Neurocritic, Neurobonkers, Neuroskeptic, Mind Hacks, Dorothy Bishop's Blog). The headline ("Neuroscience: Under Attack") was inaccurate, but the issue raised is important; there is some sloppy reporting and writing on neuroscience.

How does education fare in this regard?

There is definitely a lot of neuro-garbage in the education market.

Sometimes it's the use of accurate but ultimately pointless neuro-talk that's mere window dressing for something that teachers already know (e.g., explaining the neural consequences of exercise to persuade teachers that recess is a good idea for third-graders).

Other times the neuroscience is simply inaccurate (exaggerations regarding the differences between the left and right hemispheres, for example).

You may have thought I was going to mention learning styles.

Well, learning styles is not a neuroscientific claim; it's a claim about the mind. But it's often presented as a brain claim, and that error is perhaps the most instructive. You see, people who want to talk to teachers about neuroscience will often present behavioral findings (e.g., the spacing effect)--as though they are neuroscientific findings.

What's the difference, and who cares? Why does it matter whether the science that leads to a useful classroom application is neuroscience or behavioral?

It matters because it gets to the heart of how and when neuroscience can be applied to educational practice. And when a writer doesn't seem to understand these issues, I get anxious that he or she is simply blowing smoke.

Let's start with behavior. Applying findings from the laboratory is not straightforward. Why? Consider this question. Would a terrific math tutor who has never been in a classroom before be a good teacher? Well, maybe. But we recognize that tutoring one-on-one is not the same thing as teaching a class. Kids interact, and that leads to new issues, new problems. Similarly, a great classroom teacher won't necessarily be a great principal. 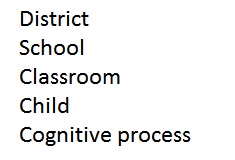 I've called this the vertical problem (Willingham, 2009). You can't assume that a finding at one level will work well at another level.

When we add neuroscience, there's a second problem. It's easiest to appreciate this way. Consider that in schools, the outcomes we care about are behavioral; reading, analyzing, calculating, remembering. These are the ways we know the child is getting something from schooling. At the end of the day, we don't really care what her hippocampus is doing, so long as these behavioral landmarks are in place.

Likewise, most of the things that we can change are behavioral. We're not going to plant electrodes in the child's brain to get her to learn--we're going to change her environment and encourage certain behaviors. A notable exception is when we suspect that there is a pharmacological imbalance, and we try to use medication to restore it. But mostly, what we do is behavioral and what we hope to see is behavioral. Neuroscience is outside the loop.

For neuroscience to be useful in the classroom we've got to translate from the behavioral side to the neural side and then back again. I've called thisthe horizontal problem (Willingham, 2009).

The translation to use neuroscience in education can be done--it has been done--but it isn't easy. (I wrote about four techniques for doing it here, Willingham & Lloyd, 2007).

Now, let's return to the question we started with: does it matter if claims about laboratory findings about behavior are presented as brain claims?

I'm arguing it matters because it shows a misunderstanding of the relationship of mind, brain, and educational applications.

As we've seen, behavioral sciences and neuroscience face different problems in application. Both face the vertical problem. The horizontal problem is particular to neuroscience.

When people don't seem to appreciate the difference, that indicates sloppy thinking. Sloppy thinking is a good indicator of bad advice to educators. Bad advice means that neurophilia will become another flash in the pan, another fad of the moment in education, and in ten year's time policymakers (and funders) will say "Oh yeah, we tried that."

Neuroscience deserves better. With patience, it can add to our collective wisdom on education. At the moment, however, neuro-garbage is ascendant in education.