November 18, 2012
I recently came across a page on Facebook with the cover "Six Will Fix": 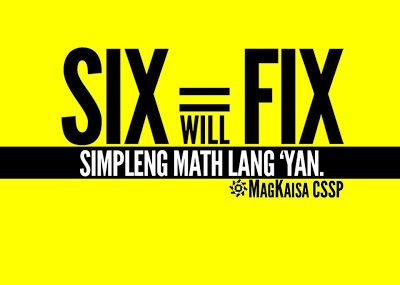 On its timeline, I saw a link to an article posted in Yahoo by Michael B. Sauter and Alexander E. M. Hess | 24/7 Wall St entitled "The Most Educated Countries in the World". This article was a brief analysis of a small piece of a large data collection, "Education at a Glance 2012", published by the The Organization for Economic Cooperation and Development’s (OECD). Sauter and Hess highlighted from the data the educational attainment in countries. The list yielded the observation that the most educated countries are those that spend about 6% of its GDP on education:

Country (Percent of Population with Tertiary Education) Percent of GDP Spent on Education:

In fact, OECD countries on average spend at least 6.3% of its GDP on education. In 2009, the countries that spent less than 6% were Austria (5.9%), Czech Republic (4.8%), Germany (5.3%), Hungary (4.8%), Italy (4.9%), Japan (5.2%), Poland (5.8%), Portugal (5.9%), Slovak Republic (4.7%), and Spain (5.6%). This level of spending includes both private and public sources. However, removing private sources still leads to an OECD average of 5.4%, indicating that governments do invest a significant portion of its domestic product on education. "Six Will Fix" does make an important point when one looks at how much or how little the Philippines spends on education (about 2% of its GDP). We need to factor in here that the Philippines does not have a high GDP and the fact that it is a country that has a relatively high population.

Francis Alain Ebardo, who shared the link to the Yahoo! article on "Six Will Fix", also wrote the following:

In Asia: Japan #3, South Korea #6, and the Philippines (sorry, it's taking me a while to google. Can't find the figures. Realization --uneducated me: if we were anywhere in the top 10, will we have clowns to select from for our elections?)