When Teachers Are Underpaid ....

July 05, 2012
In the Squidoo site, there is an article that poses the question, "Are teachers underpaid?" One of its members, hanjee, answers:

"In the Philippines, this is not a question. It is already a fact, a statement. ALL teachers in the philippines are underpaid. One profession that shouldn't be taken for granted because they hold the key to the future of our kids. They deserve a raise!"

At lolwithme.org, there is a poster that answers this question: 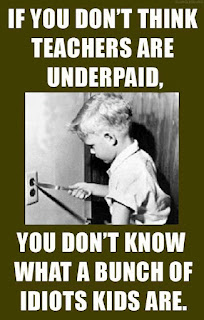 If the teachers are indeed underpaid, Yahoo! has an interesting page that asks the question, "What do underpaid government teachers do in their spare time?" (Of course, this question misses an important second part of the statement describing the current predicament of public school teachers in the Philippines, that is, they are not only underpaid, but also overworked). This question has elicited several responses and the one chosen by the readers goes:


"Some sell RTWs (ready-to-wear) and jewelry on installment. Others sell ice candy and ice in their own homes. Others offer tutorials to kids. And others sell barbecues at night. Anything to augment their income and low salary...."


"....and in order to have some food to serve and cash to pay for their loans, they also do "rakets" like tutorial in all subjects,sell tocino,clothes and tupperware. some who are lucky,just stay at home and man their sari-sari stores.

they become superwomen in an instant.

really pathetic and now we ask,what's wrong with our educational system when our teachers themselves don't have enough time to look after themselves."

Public school teachers in the Philippines do not have the time, energy and money to spare. As a result, these teachers are unable to participate in solving the severe problems in basic education the country currently faces. Since these teachers are also breadwinners, their first priority is to augment their income so that they can in fact support their family. A reader of this blog, Sheila Lacanaria comments:


Instituting a major policy change in education based on just the observations and anecdotes of a few misguided politicians and non-scientist educators is not only irresponsible but criminal. Implementing a half-cooked K-12 program squanders aways billions of pesos that Filipinos worked hard for. That I am livid every time I see the Education Secretary spouting half-truths in the media is an understatement. I am glad I found this blog. At least I know that there are still some sane people in our country who strongly oppose K-12. Aside from the mobilization organized by the ACT though, I have not seen any other that is publicized on national media. If only the teachers' unions and education associations in the Philippines have the same political clout as the teachers' unions in the US....

The lack of organization and participation, of course, serves as a crystal clear evidence that Philippine school teachers are underpaid and overworked. The Alliance of Concerned Teachers tries its best to make the people aware of the current sad plight of teachers. For example, they run to express their demand for increase in wages:
These groups of teachers march and raise their voices. Unfortunately, their voices seem to be falling on deaf ears. The consequences of ignoring the demands and needs of public school teachers on the quality of basic education are devastating. Teachers who have to resort to additional ways to augment their income are not able to give their undivided attention to the education of the pupils in their classrooms. Both their time and attention are now compromised. On top of this, there is very little reason to be motivated, much less participate in renewing and reforming education. These are just the obvious effects of low salaries and poor working conditions. Buried in these already serious ramifications is the rise of a "shadow educational system":

The above study by Mark Bray and Chad Lykins points out how much private tutoring has spread out over Asia and its far reaching economic and social implications. Private tutoring, although it pursues the same goals of a formal education system, is quite different in both quality control and accessibility. Tutoring outside of classrooms can be positive for the society if it addresses students who are falling behind and students who need additional time and attention. However, in most cases, private tutoring is a business and not a service and those who avail of supplementary tutoring are the wealthy and the main objective is not really remedial education, but gaining advantage over their peers. This aspect grossly undermines "education for all".

There are various eye-openers from the above Asian Development Bank study. As the number of private tutoring increases in Asia, several underlying reasons have been examined. One reason identified involves changes in curriculum. The following examples are cited. In India, the move to mother tongue education has forced families to resort to private tutors for English instruction. The spiral approach to teaching the sciences in Georgia have likewise caused students to seek help from the private sector. In Hong Kong, the move away from rote learning has compelled parents to hire tutors who emphasize memorization and formulaic thinking. And in Cambodia, "child-friendly" classrooms characterized by short instructional hours have led to the inability of teachers to cover adequately material such that students are now obliged to take private tutoring not as a supplement but as an essential part of education. With "shadow education", the basic education system cannot address the social and economic divide of the nation. It will only worsen. This may indeed sound surprising, but all of the above are present in the DepEd's K to 12 curriculum.

The main problem with "shadow education" is the fact that it is NOT "education for all". It erodes the tenets of public basic education. Philippine president Benigno S. Aquino III said,

" We need to add two years to our basic education. Those who can afford pay up to fourteen years of schooling before university. Thus, their children are getting into the best universities and the best jobs after graduation. I want at least 12 years for our public school children to give them an even chance at succeeding."

What president Aquino fails to see is that the government's current treatment of its public school teachers and the misguided K to 12 curriculum would be both working against his promise and vision....

Data and Statistics Education for All Teacher Groups Teaching