On Human Rights, Linguistic Rights, and Mother-Tongue Based Multilingual Education

July 30, 2012
These words are huge and complex. Each one represents a value, an expression of importance. These are supposedly beacons to guide priorities. Justice, one of the seven values that guided Finland's education reform, is another big word. And in Pasi Sahlberg's words, this entailed "Attaining the goal of offering equal opportunities to a quality education for all has required creating and maintaining a socially just school network."


"Education for All" encompasses all the words in the title of this post. It is the yardstick that must be used to gauge education reforms in the Philippines, including DepEd's K to 12. It must be the primary objective, the rule that should set priorities. When DepEd spends money, time and effort on advertising its new curriculum in shopping malls, one should ask if these efforts are indeed in line with the priorities set by "Education for All".  When DepEd institutes the use of the mother tongue as medium of instruction, one must ask if this is a genuine effort for inclusive education. When DepEd jumps into new approaches, one must ask if basic needs have been provided first.

Leo Ortega Laparan II has been writing a series of article in the Manila Bulletin describing the current situation of schools in the northern islands of the Philippines. The latest in this series talks about Cadadalman Elementary School in Camiguin Norte Island. There are overcrowded classes, lack of textbooks, and poor facilities. The head teacher had the following to share:


“We even use the backstage to hold Grade 4 classes. For that, schoolchildren would have to endure the heat… even us teachers. At present, we lack a school building because of the Preparatory (referring to Kindergarten) classes, which became mandatory effective last year. That makes it seven years for us now. The kids won’t be allowed to enter Grade 1 without taking Prep. That’s why the room that you saw earlier was divided into two. We just chose the best room in terms of safety to ensure the wellbeing of the little children.”

The situation in Camiguin Elementary School is no different, as reported earlier in this series by Laparan. Classrooms no longer have ceilings and walls are cracked. Pupils hold umbrellas to keep themselves dry when it rains since their rooms no longer protect them from the elements. With regard to textbooks, as many as ten pupils share one copy and for science in Grade 3, for instance, a 1985 edition is still in use. These stories from the north do highlight the shortages Philippine schools continue to face. Although these islands are indeed remote, one must not be blind to the shortages in schools that are in the neighborhood of the Congress as well as in the public schools near the national offices of the Department of Education. It is a question of priorities, do we put up a display or presentation of K to 12 in the shopping malls or do we send books to Camiguin first?

Inclusive education is a high priority. The rationale behind mother tongue education partly rests on pupils' basic rights. This is in addition to preserving and nurturing cultural heritage. In a recently held International Conference on Teacher Education, Prof. Romylyn Metila of the UP College of Education presented a paper on “The Role of Teacher Education in Championing Linguistic Human Rights (LHR) and Effective Language Learning through Multilingual Education (MLE): A Fight for Fairness”. In the presentation, Metila stressed the need to examine closely the provisions of policies aimed at addressing linguistic rights and mother tongue education. Factors that require thoughtful considerations were enumerated. First, there is a need to recognize that the Philippines is really diverse in terms of languages. There are more than one hundred and fifty languages in the country. Second, the appropriateness and adequacy of these languages to serve as medium of instruction must be evaluated. Third, the spelling and grammar of these languages need to be set before these languages can be extensively used in reading and writing. And of course, last but not the least, the question of how prepared teachers are was likewise raised. The importance of educating the young on their native culture and tongue is not debatable. What requires careful examination are the pedagogical and practical sides of the argument. And these sides are best handled by the teachers and principals in their own respective schools. Inclusive education should be the main goal of the Department of Education in the Philippines. How the academic performance of students in the Philippines could be enhanced is the job of the teacher and not of a bureaucracy.

"...Even as the government has identified education as its priority service, the indigenous peoples of Mindanao view it as a “vague illusion.” Accredited schools supposedly established for indigenous peoples were built or established in areas far from the communities. Many residents are also unable to pay even the smallest fees, and some of the Lumad children spend their formative years in community alternative learning schools usually established with the aid of non-government organizations. Even in the rare situations where communities are benefited by a literacy and numeracy school, these are not sustained because of counter-insurgency operations of the Armed Forces of the Philippines (AFP). Instead of protecting the communities from rebel groups, the communities have become the targets of the operations. Militarization and war have resulted to human rights violations, exacerbating the living conditions of the already impoverished indigenous communities, with indigenous children becoming most vulnerable...

...In a conflict situation, children are robbed of both their right to learn and their right to live a child’s life. They are forced to violent realities too early, forced to experience terror too often. And this is not yet even going into the post-conflict trauma that these children suffer. Without access to education, there will be no room for indigenous communities to promote personal development, strengthen respect for human rights and freedoms, and enable individuals to participate freely in a free society...." 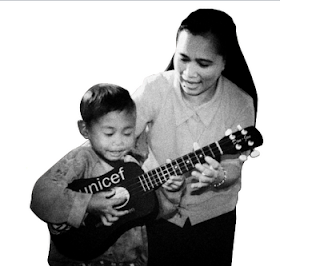 The following are videos depicting the current plight of the Mamanwa tribe of Agusan del Norte:

These are stories from the north and the south. These stories hopefully can help us understand better the words in the title of this post.