"Truthiness in Education" : We All Must Learn?

Although it is clear that the K to 12 reform of the Department of Education in the Philippines is not supported by scientifically based research that has been peer reviewed and accepted in respectable science journals, the opposition to this reform must likewise embrace the idea of evidence-based approach to solving problems in education. Objections to DepEd's K to 12, unfortunately, have not been publicized adequately in the media. Too much focus has been placed on the additional two years that will be added to high school although this will not happen until four years from now. On the other hand, there are major changes in the curriculum that are now implemented ahead of the additional years in high school. The absence of a formal subject of science in the early years is hardly covered in the news. The implementation of mother based tongue - multilingual education receives very little attention. And the same holds true for adopting a spiral approach to learning math and the sciences.

There seems to be some mobilization efforts exerted by organizations to protest formally DepEd's K to 12. The Alliance of Concerned Teachers (with some of their press releases posted on this blog) have been somewhat leading a movement against K to 12. There is a signature drive by student organizations which enumerates the following reasons against K to 12:


The Petition
"1.2M Pirma Laban sa Programang K to 12" is the commitment of parents, teachers, students, school staff and administration, workers, other organizations and alliances, and individuals who opposes its implementation.

K to 12 is being implemented without a legal basis. Beyond the lack of a legal basis, K to 12 must be opposed on the following primary unities—

1. Additional two years in basic education means that parents have to raise no less than P25, 000 to cover transportation, food, school projects and other expenses.

2. K to 12 is a neoliberal policy to further cheapen wage and intensify labor contractualization

3. K to 12 is designed to meet the international demands for labor-export.

4. That K to 12 is a not a solution to the perennial dismal state of education in the country but will further worsen it due to the overwhelming shortages brought about by insufficient government funding. It will justify state abandonment of education and compel SUCs to generate income through tuition and other fees increase.

The above petition, of course, will not fit the description of a "well-funded" and "slickly produced" movement, but, unfortunately, the words are marked with ideology and not science. Basic education reforms need to be free from ideology. Words like "neoliberal" and phrases that tie basic education to labor policies are as bad as DepEd's attempt to justify its K to 12 reform using unemployment issues. This mistake is not made just by the student organizations as exemplified by the above petition, but also by the Alliance of Concerned Teachers (ACT). In ACT's press release of their report card for the Philippine president, ACT gives an "F" grade in Technology and Livelihood Education because in their opinion, K to 12 only "promotes voc-tech to fulfill demands of big corporations...."  ACT continues in its press release, "....Job creation and poverty reduction will not happen if the same failed globalization policies of previous administrations are retained...."

Basic education is a right not because of job creation or poverty reduction. These economic issues may be related to basic education, but basic education has its own legs and purpose. The classroom is for learning. And this is likewise the utmost obligation of a teacher. Opposition to K to 12 must be based on its flaws as an education reform, and not on some imagined conspiracy or policy. Teachers should know best what the curriculum needs, what the school needs, so that basic education will be improved in the Philippines. Unfortunately, the current opposition to K to 12 by these groups lack this focus.

It is true that teachers are overworked and underpaid. These conditions do not help in bringing out the much needed innovation and resourcefulness from the teaching force of the country. So it is true that the government must first address the financial condition of its public school teachers. Kindergarten teachers should be treated in a much better fashion and ACT is correct in emphasizing the current plight of kindergarten teachers in the country. ACT does service to teachers by voicing their need for better salaries and training.

However, teachers must realize that the nation's problems are not only due to politics and corruption. Even if the country is able to wipe out corruption and assign an adequate amount to its public education budget, the problems will not disappear. Incompetence is a big issue and, like corruption, is one of the main causes of the problems the country currently faces. 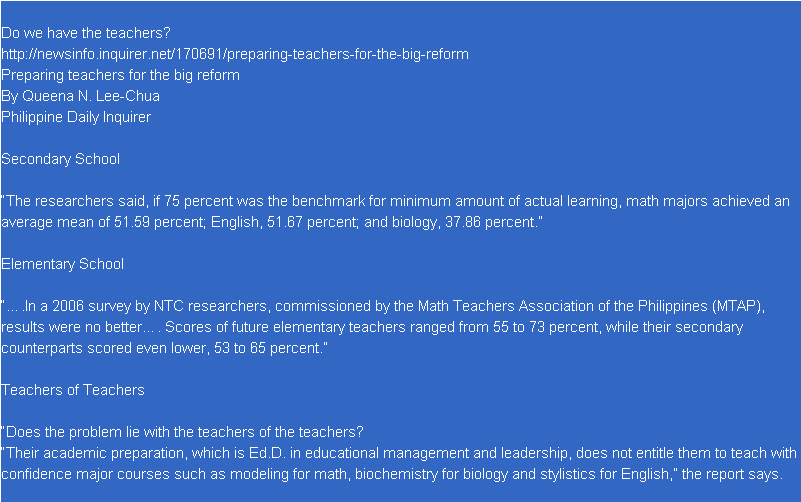