Why Quality in Basic Education Is Important

May 12, 2016
There is no question that the Philippines needs more scientists for various reasons. Reacting to a post analyzing votes cast for vice president in the recent elections in the Philippines, the dean of science at New York University, Michael Purugganan, comments, "...This year, they see "perfect fit trend lines", and again say Leni is cheating. One of the best answers to why the Philippines should have more scientists? So that you can have astrophysicists like Reina Reyes or neuroeconomists like Migs Garcia crunch the numbers and show us why this is all normal math in action and not simply fraud."

Whether having more scientists would help the public form sound opinions remains to be seen. In the US, for instance, Joseph E. Uscinski in OpenDemocracy writes, "Despite the fact that climate scientists are in near total agreement that climate change is real, man-made, and harmful, about 40 percent of the US population rejects the scientific consensus... ...Democrats came to support climate change not because they sat down and confronted the evidence, read the scholarly journals, and evaluated the climate models, but rather because they accepted cues from their elites (which is exactly what Republicans are doing)...."

All of us, including scientists, are all vulnerable to what is called "confirmation bias". We prefer not only to see but also look for evidence that supports what we already believe. What saves scientists from this bias is that their work are submitted to peer review before being published. Unfortunately, with social media, ideas can easily spread without due diligence.

The election for vice president in the Philippines is quite close. With nearly 96% of votes processed, GMA News reports Leni Robredo leading her closest rival Bongbong Marcos by about 200,000 votes, which is about half a percent of the total votes cast.

With such a small lead, naturally, there is angst, and, unfortunately, a professor of political science at De La Salle University, Antonio Contreras, has fueled a conspiracy theory by promoting a work done by David Yap, an instructor at the Ateneo de Manila University: 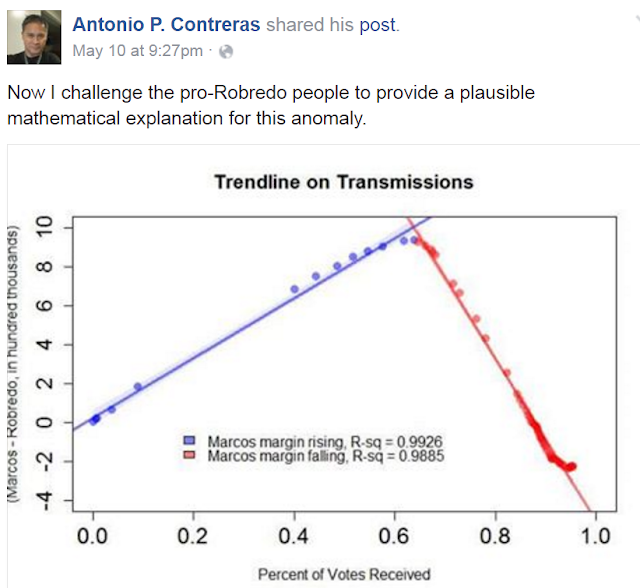 Fortunately, in the US, no one questioned the following, as blogged during the 2008 presidential elections:

7:47 pm - McCain's up by 15 in Virginia, with 6 percent reporting, mostly from southern rural counties.

8:33 pm - Virginia seems to be tightening somewhat. McCain's lead has been reduced to 11, with 37 percent reporting.

The above reversal is expected because election returns are not really transmitted randomly. In the state of Virginia, the northeast region always lags the rest of the state in transmitting results. Northern Virginia is heavily democratic.

The situation in the Philippines is in fact very similar to what happens in Virginia. Instead of plotting the actual lead held by a candidate as election returns are processed, one should look at the lead in terms of percentage of the votes processed, similar to the blogging illustrated above. Using the graph displayed by Contreras, the data can be presented in the following fashion. 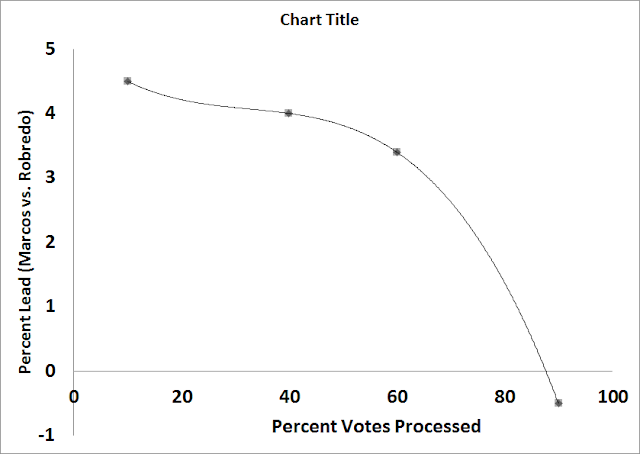 With the above graph, it becomes clear that like McCain in Virginia's presidential election, Marcos starts with the lead but actually loses this lead in a monotonic fashion as votes are processed. Votes transmitted early are from regions in the Philippines that are known to be very supportive of Marcos. The data support this explanation as shown by Reina Reyes: 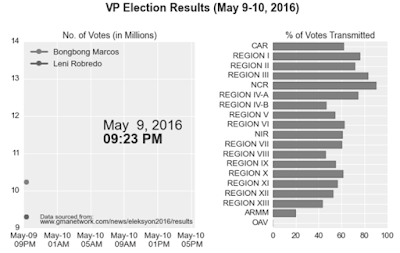 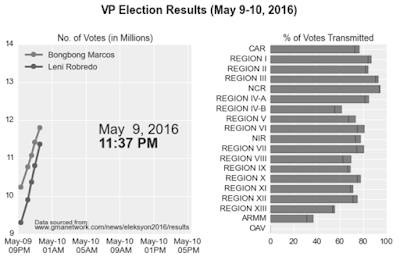 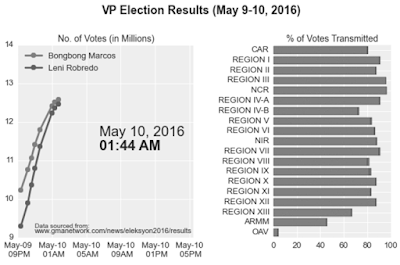 Reina Reyes explains, " You can see how the dramatic overtake is clearly driven by votes coming in from Visayas and Mindanao."

Is the above explanation enough to sway those who would prefer to believe in a conspiracy? Probably, not.

Confirmation bias is extremely challenging for educators. The challenge starts even in the early years of education. Children do not really enter schools with fully open minds. I am reminded of this paper published in The Arithmetic Teacher, "Do You Think You Might Be Wrong? Confirmation Bias in Problem Solving" by  James E. Johnson where a lesson is nicely illustrated on how to help students confront confirmation bias. It is a simple lesson where students are supposed to determine a rule being used by a teacher with regard to three numbers. Students are asked to give three numbers and the teacher responds by stating whether the set of numbers conforms to the rule the teacher had in mind or not.

Here is a sample sequence provided by Johnson that demonstrates how a student may be thinking as he or she tries to discover the hidden rule of the teacher:

The sequence above shows that the line of thinking involves designing a trial that proves a hypothesis. It is perhaps seldom that we devise an experiment with the intention of disproving what we believe. By the way, in this example, the teacher's hidden rule is that the three numbers are simply arranged according to magnitude, from lowest to highest.

On a side note, we also need open minds so that we do not miss the obvious. If there is indeed something wrong with Philippine elections, perhaps it is just there staring at us. In a country that aims to be governed by a majority, it is disconcerting that not one of the senatorial candidates needs a majority to win a seat in the senate.

Leila de Lima is about to become a senator without even a third voting for her. This is a bigger problem.