May 28, 2016
Philippines' incoming president Rodrigo Duterte has a new nominee for the Secretary of Education, University of the Philippines professor emeritus Leonor Magtolis Briones. Briones is currently lead convenor of Social Watch Philippines, "an international network of citizens’ organizations struggling to eradicate poverty and the causes of poverty, to ensure an equitable distribution of wealth and the realization of human rights." Briones is a member of the W8, a group of eighth women committed "to remind world leaders of the promises they made and of the responsibility they have to fulfill, and to bring the voices of the poor in the south, particularly of women, to those who make global decisions, and to put faces to global statistics". Before joining W8, Briones was asked the question, "Can you describe how health / education in your country is experienced by ordinary people on a day-to-day basis?" This was her response:


"We have high levels of poverty, we suffer from climate crisis and economic crisis. Malnutrition is a big problem. Education is free but for a lot of families it’s almost impossible to let the children go to school because other things (work) have to be done and often the schools are too far away. The Philippines have to deal with a lot of drop outs from school. Education is a right but it takes more than free access to make it possible for all children to get it. What if you don’t have shoes and you have to walk 10 km to reach school? For those who go to school, there is a severe lack of school buildings, books, materials and equipment. There are not enough teachers. It is also recognized that the quality of education is going down as well. Performance in English and Math compare very poorly with other countries. Education is the key to development. In order to have a great productive life you need to be educated. In order to get real access to education there need to be better roads and more schools. The government reacts now on the economical crises, while this is the time to invest in education. Health/education services for the ordinary people in my country is characterized by deterioration both in quantity and quality. As far as health is concerned we have among the highest infant and maternal mortality rates in Asia. There has to be a midwife in every village. Not all villages have doctors in their clinics. Some don’t even have nurses and midwives. They only have health attendants. I just came from a public health centre near my university for my Oxfam photo shoot. This is considered a fairly good centre but a doctor goes there only once a week. The staff in the health centre we visited complained they don’t have enough medicine for even the most simple of illnesses.” 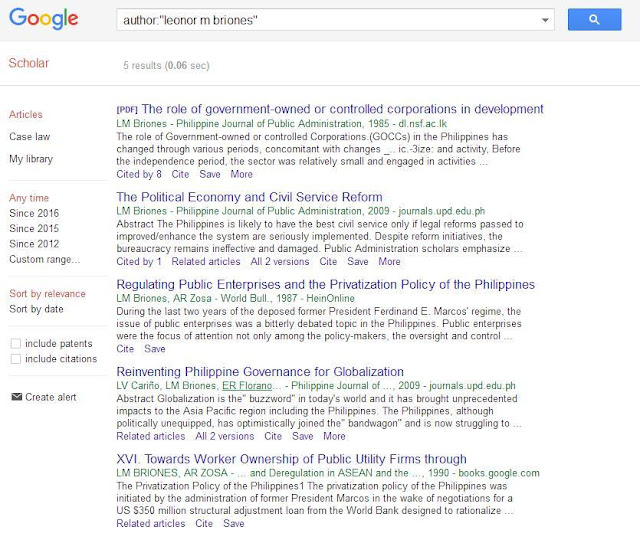 The UP Diliman-Diary also keeps a record of a speech delivered by Briones to the United Nations General Assembly ten years ago:

The Millennium Development Goals will not be reached by 2015. This is the assessment of civil society organizations five years after their adoption by the global community of nations. The promises of the Millennium Declaration are not fulfilled; the financial resources identified under the Monterrey Consensus have not all been generated. The leading actions on financing for development which heads of state and leaders of government agreed upon have not been fully implemented.

As a consequence, more than a billion people continue to live in absolute poverty, girl children are not able to go to school; infant mortality rates remain high; mothers still die in childbirth, the HIV pandemic continues to escalate, the environment continues to be devastated, and global issues on trade, on debt and on ODA remain unresolved.

Mobilizing domestic financial resources for development. Developing countries are continually reminded that they are responsible for mobilizing domestic financial resources. But, how can they collect more taxes when their economies stagnate and are stunted because of unfair terms of trade, because of massive debt burdens and structural adjustment programs?

Mobilizing foreign direct investment. We deplore conditionally in structural adjustment programs which compel countries who are unprepared to open their markets and their natural resources to foreign investment.

Developing countries demand that foreign investors should not only exercise corporate responsibility. They need to be transparent in their operations. They have to be accountable to their host countries whose natural resources they exploit for profit.

International trade. Trade is the single most important external source of development financing. Ironically, developing and least developed countries continue to suffer from unfair terms of trade. As poignantly stated by an African official, “You demanded that we faithfully pay our debts, and we did. You asked us to restructure our economies. Our people underwent indescribable suffering but we did it. You even demanded that we change our leaders, and we did. But you refuse to buy our cotton, our cocoa and our other products!”

ODA. Substantial increase in ODA to developing countries has not been achieved. A number of rich countries steadfastly refuse to honor their 30-year commitment to share .7% of their GNP. We ask the General Assembly to remind recalcitrant member countries of this promise.

External Debt. The debt crisis continues to rage in many countries in Asia, in Latin America and in Africa. While the G8 committed to cancel all the debts of eligible HIPCs, countries which are euphemistically described as “middle-income” teeter on the brink of disaster as they struggle with unsustainable debts.

It has been two decades since the last global debt crisis. The babies who have survived are now 20 years old. They still carry the scars of malnutrition, inadequate education and poor health. They have been tragically deprived of the basic capacities for human development.

These countries have been further shaken by natural catastrophes, bad terms of trade, bloodletting and conflict.

We therefore urge the General Assembly to support debt relief for “middle income” countries whose economies have been devastated by natural catastrophes like the tsunami, as well as those with high levels of poverty and debt.

The persistence of debt crises underscores the need to reform the international financial system. We demand transparency and accountability from multilateral institutions. Developing countries voice and vote in the governance of these institutions need to be strengthened.

Gender Equality. We likewise urge the members of the General Assembly to allocate resources to promote gender equality in their respective countries.

Promises, Promises. The heads of state and leaders of governments have made many promises for decades, some of which are the World Summit on Social Development in 1995, the Beijing Conference also in 1995, the G7 meeting of 1999, the Millennium Summit in 2000, the International Conference on Financing for Development in 2002, the Johannesburg Summit, also in 2002, and the G8 Summit in Gleneagles.

Promises, promises. This General Assembly is not the time for more promises. It is time to fulfill old and new promises. The poor of the world cannot wait until 2015. Fulfill your promises!