No Room for Violence in Promoting Basic Education

May 27, 2016
In advocacy, there is nothing worse than doing something clearly against what you are fighting for. Voicing one's opposition against DepEd;s K to 12, because it does not respect the rights of parents, teachers and children, is not helped by violence or destruction of public and private property. There is no room for violence if we claim to stand for quality education of our children. There is no room for hegemony if we claim to stand for equity in education. Doing so only provides reasons for people not to see what we are truly advocating.Doing so only provides an additional excuse for the government not to address the real and urgent problems Philippine basic education faces.

Last Friday, I met with representatives of Gabriela about their concerns regarding the nationwide implementation of Grade 11 this coming school year. As part of the Makabayan bloc, they are calling for the abolishment of the K to 12 Program and for the Department not to push through with its rollout of senior high school next month. I told them that unless the Supreme Court decides otherwise (there are 5 petitions against the "K to 12 Law" and the SC has yet to render a decision), we have no choice but to follow the law and implement the program fully.
We proceeded to discuss their specific concerns about Grade 11, particularly the mom from North Caloocan who wanted to know where her kid can enroll considering their public school won't be offering senior high this year. While we were having the meeting, they had a contingent of about 20 people protesting outside the main gates of the DepEd. When I asked them why the need for protest action considering we're already discussing the issues and I was offering them possible solutions to the problems, they said that it was standard for them to do this even if there's a dialogue.
Fair enough. They want to express their views; we want to help them make sure all kids who are supposed to be in school will be in school. That's our system. That's democracy.
Today, other members of Makabayan (i.e. Kabataan, Anakbayan, LFS, KMU) decided to "Occupy DepEd". They pretended to be visitors, entered our premises, gathered during lunch time, and vandalized the DepEd vision-mission-core values marker outside the main building (Rizal) of the DepEd Complex.
Why? Because "Stop K-12!!!"
Okay.
They refused to leave the DepEd Complex and we have allowed them to stay despite the disruption.
Maayos namin kayong kinakausap sa iba't ibang lugar at pagkakataon. Ginagalang namin ang inyong mga pananaw. Iisa ang ating mithiin na lahat ng Pilipino ay umunlad at makapasok sa mga ligtas at magagandang paaralan. Pakiusap lang: itigil na natin ang mga kalokohan at stunt.
The Filipino deserves better political discourse, especially from groups who claim to be progressives. 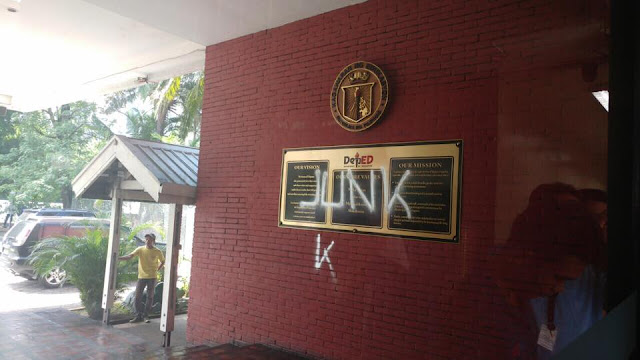