What Makes a Teacher a Good Teacher

March 07, 2015
Richard Ingersoll, an economist at the University of Pennsylvania, provided in his research data that support the following generalization: "It is widely believed that the “best and brightest” college students find elementary and secondary teaching less attractive than other career and job options. Over the years, data from different sources have seemed to confirm this." Of course, Ingersoll qualified the above statement so that it would not be misunderstood. Ingersoll added, "Of course, we cannot assume that either the “best and brightest,” or those scoring higher on standardized tests, are the best or the most effective teachers."

After all, would Einstein have been a good teacher? The following is a screen capture of a page from NASA's "Welcome to StarChild: A Learning Center for Young Astronomers"

Einstein actually had a teaching degree and taught in high school. A friend of Einstein, Henrich Zangger, gave the following description of Einstein's teaching talents in Walter Isaacson's Great Innovators: 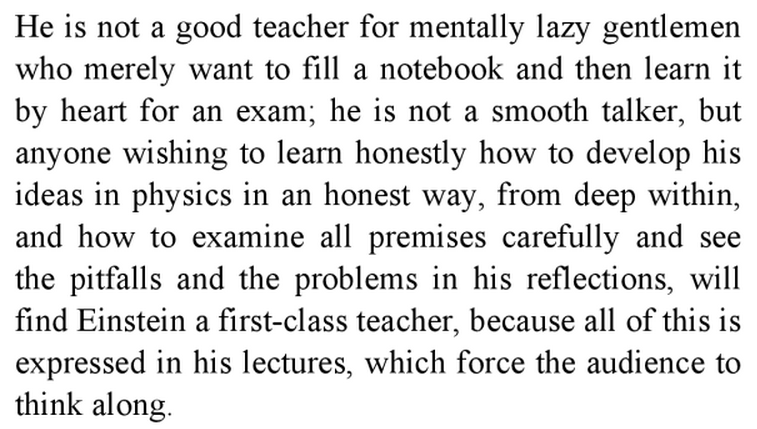 Zangger clearly points out in the above excerpt that a teacher is rendered good only in the light of his or her students.

Teachers’ mathematical PCK was assessed by a newly constructed test that tapped their knowledge of mathematical tasks, of student thinking, and of explanations and representations. For example, teachers had to predict typical student errors in a task requiring the area of a parallelogram to be calculated or to list as many explanations as possible for the fact that minus one times minus one equals plus one. The test comprised 23 open-ended items that were independently coded by two raters using a standardized coding system.

With this measure, the paper found that:

Teachers who scored highly on PCK provided more cognitively activating instruction and better learning support, with the former showing positive effects on student achievement and the latter on student motivation.

The paper did venture in correlating a teacher's general academic ability with student achievement and motivation. This part, however, was quite weak in the paper as teachers included in the study had been teaching, on average, for more than twenty years. Surely, these teachers must have improved their subject knowledge from teaching that long. The only measure used for gauging a teacher's "brightness" was a self -reported teacher's grade point average (GPA) in school. Teachers in this study had a mean of 2.33 with a standard deviation of 0.48. In the German system, a GPA of 2.33 is above-average. It is worth pointing out that although no correlation was found between a teacher's GPA and student achievement, a teacher's PCK is correlated with a teacher's GPA, highlighting the idea behind PCK, that is, it is a measure of both subject matter and pedagogical knowledge. Knowing the subject and knowing the students - these are apparently the ingredients necessary for a teacher to be effective.