DepEd's K+12 Is a Problem, Not a Solution 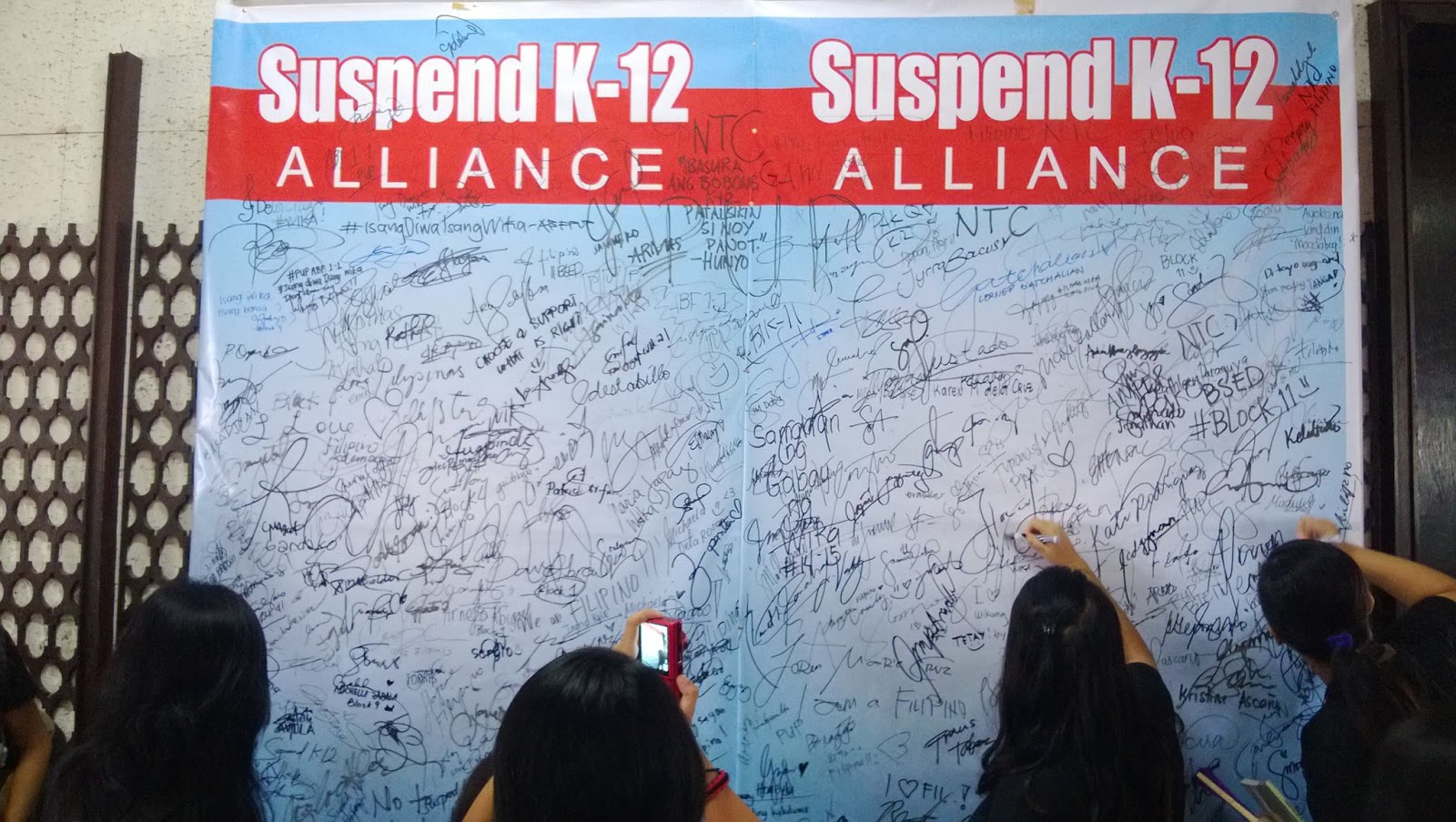 The Philippines has been embarking on a gargantuan education reform. 2016 marks the beginning of the senior high school as prescribed by the Enhanced Basic Education Act of 2013. To appreciate the enormity of this revision, the numbers associated with the two additional years in high school are worth noting. High school basically becomes 50% bigger. Currently, there are about 200,000 teachers in secondary schools. What can therefore extrapolate that the two additional years of DepEd K+12 would require 100,000 additional teachers.

In 2014, the passing rate for aspiring secondary teachers in the Philippines was 28% (only 12,033 passed out of 42,358 takers). The fact that it may take up to ten years to produce the 100,000 teachers needed by the new DepEd K+12 curriculum should make anyone pause. Of course, adding years not only requires teachers but also classrooms and learning materials. Schools have not even fully met the needs of the first ten years of basic education in these areas. The new curriculum not only adds two years but also overhauls the entire basic education such that new learning materials are required for all. The new curriculum introduced mother-tongue based multilingual instruction as well as a spiral approach in the math and the sciences. And last but not the least, kindergarten is now compulsory. DepEd clearly embraces a reform so huge that it might as well use the scope of the reform as an excuse for a destined failure.

Thus, the call for suspension of DepEd's K+12 remains and the Supreme Court of the Philippines recently issued an order to DepEd to respond to this petition:

Related to this movement, a couple of weeks ago, DepEd secretary Luistro has been quoted, "We've already spent on this, and we've been working on this for the last 5 years...We've already seen improvements from our problems from 3, 4, 5 years ago. We're very, very ready for this." The main substance behind the petition before the Supreme Court is the looming crisis in higher education. A "worst-case" scenario estimates that 56,000 instructors in colleges would be affected because of the drop in enrollment in 2016. Returning to the first paragraph of this post, the two additional years require 100,000 teachers so the "56,000" figure is not really a "worst-case" scenario, but a reasonable estimate. Obviously, DepEd secretary Luistro is simply hoping that those who stand to lose jobs in college instruction would assume the teaching positions needed in the added two years of high school. This is ideal as it solves two problems at the same time. Or does it simply transfers problems from one stage of education to another?

Considering teachers is only one part of the situation. Schools are likewise required to meet the needs brought forth by the additional years. To this need, Luistro claims that there are now 5,000 schools ready for senior high school. This number falls short when compared to the number of high schools in the Philippines, 8000. Congressman Tinio is therefore justified in citing that only about 60 percent of students can be accommodated (5000 is about 60% of 8000).

The Alliance of Concerned Teachers also posted in one of its Facebook pages the following, 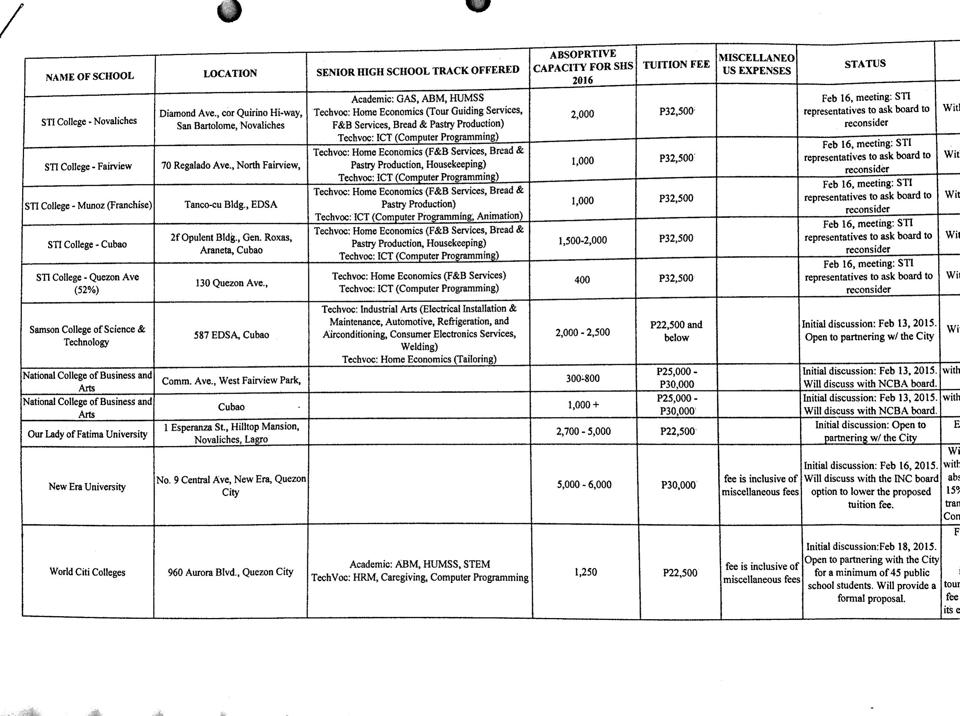 And it comes with a comment, "Sinong may sabi na libre ang senior high ng K to 12?" (Who said senior high school in K to 12 is free?). The above is a list of private institutions that are about to offer senior high school. It is enlightening to see that the schools' names in the above list bear the words "college" or "university".

One problem is unemployment. If one considers only those who are aged 15-24 years, this already covers half of the unemployed in the country. Keeping children in basic education two years longer may temporarily alleviate the unemployment situation. Unemployment is often viewed as lack of skills on the part of the employee. This is untrue since most frequently, it is a lack of opportunity that causes unemployment. The IBON foundation makes the following remark on DepEd's K+12:

According to IBON, reforms on the educational system, such as the recently-signed K to 12 Law, only focus on building skills needed by the global market. With K to 12, students are expected to work after taking up vocational and technical trainings in high school. The curriculum changes remain unsupportive of a progressive economy where students’ skills are developed to contribute to its development.

Changes in curriculum should reflect the country’s development aspirations, the research group said. However, there is apparently no learning area or competency in the present K to 12 curriculum that aims to develop the ingenuity and capacity of Filipino students to develop new technologies and build new forms of knowledge needed to help strengthen the country’s industries. These would have helped create meaningful jobs and provide a sustainable solution to the country’s chronic jobs crisis.

The other problems K+12 fails to address are the challenges basic education itself faces. Its math and science curricula, areas that drive innovation and ingenuity, are very poor in quality. DepEd uses the lofty phrase "learner-centered" as well as flashy posters.

Problems in basic education must be addressed before these grow into bigger ones. Emphasis, attention and resources must be given to the primary years so that basic education has a greater chance to succeed. In the first article of this blog, I wrote:

Instead of trying to attack the problem at the end of high school, efforts must be focused on the early years of education. This is where the dropout rate begins to escalate and these are the years where students are failing to learn as diagnosed by the standard test scores. Resources are very much needed in the first ten years of education and kindergarten. DepEd can do a better job on these years if DepEd does not have to worry about the added senior years in high school. The government should allow its citizens to work out on their own a solution for the desired two years that aim to prepare students either for college or the workforce. College preparatory schools or community colleges can do this job and TESDA could address those who are leaning towards vocational training.

Not being a solution to the real problems in basic education makes DepEd K+12 a problem in itself. It takes attention away from the early years and actually becomes a problem on its own.