If You Think Reading Is Problematic, Try Writing

February 19, 2015
I asked my son why he finds writing very difficult. First, he said it was boring. So I qualified my question, "What if the subject was interesting?" My son replied that he still would not be eager to write because writing for him was something "private". We do bare ourselves when we write so my son does have a point. Teaching a child to write could be extremely challenging. I was a child once. I was not good at writing and I did not like writing at all. Not being capable at something often was a good enough reason not to like. In fact, it took me until college to write intelligibly. My writing did not go anywhere especially when I did not even have any idea of where to begin. It was like trying to squeeze something out of a dry sponge.

It was hard then. Now, it is my turn to help a child write.

I tried to use a prompt to see if that could help my son write a story. There are picture prompts available on the internet that one may use. I picked the following:

After ten minutes, the following was my son's paragraph:

The above came with his own illustration: 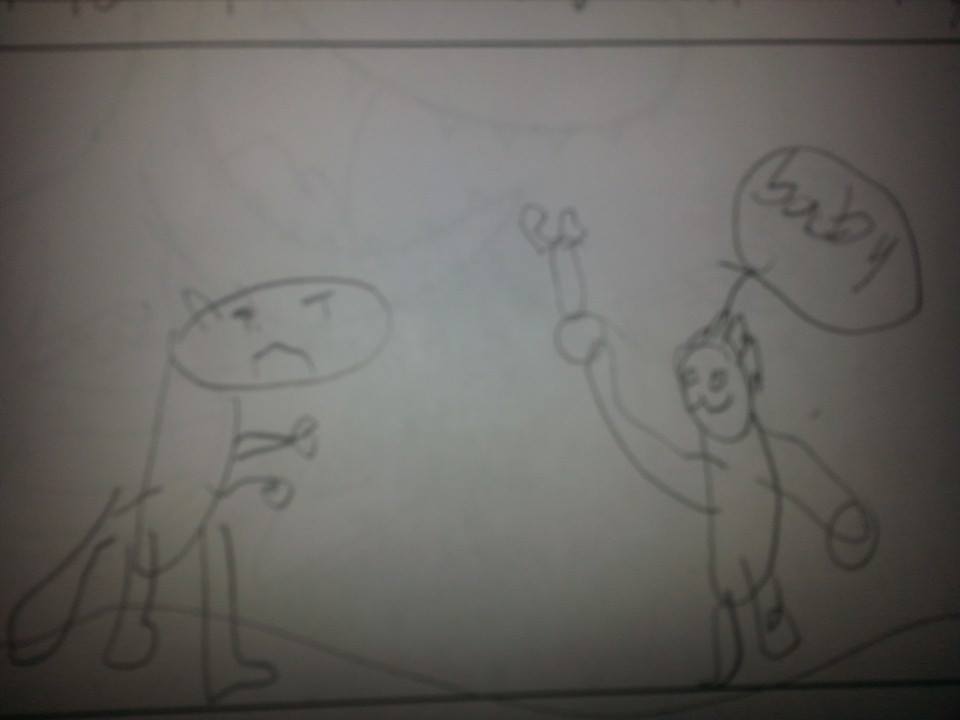 Writing goes far beyond reading because it is creative. In addition, there are rules that include spelling, grammar, sentence structure, and punctuation. It is therefore not surprising to see that in reading, 34 percent of 8th graders are proficient (NAEP reading 2011), while in writing, only 27 percent are: 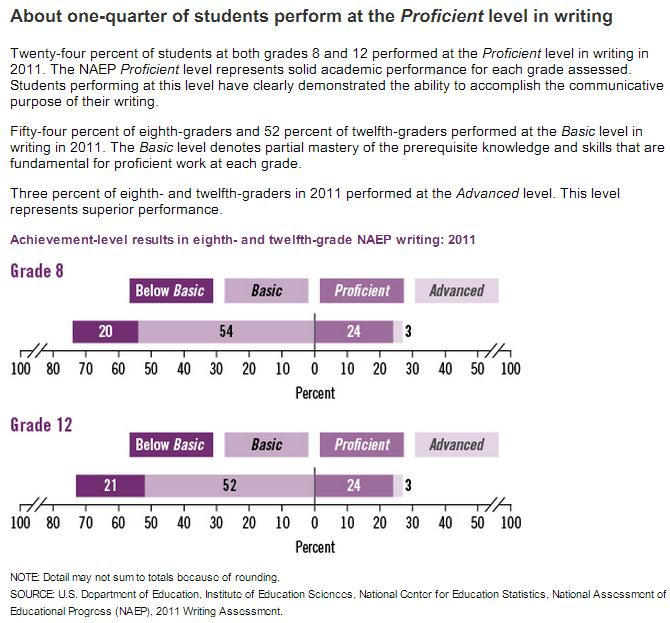 If research on effective ways to teach reading is lacking, it is worse with writing. Cognitively, writing requires the following steps: (1) generation and organization of ideas, (2) textualization of these ideas, (3) proof reading of the written piece. The first step can easily be the biggest stumbling block. For young children, however, the last two steps are likewise equally challenging. Interventions that focus on each of these various steps are still being developed. To gauge how effective these interventions are, reliable measures of writing are also required. For young children, writing is gauged through the following measures: total words written (TWW), words spelled correctly (WSC), and correct writing sequences (CWS).

One intervention in writing that has been given recent attention is the "Individualized Performance Feedback". The intervention is as simple as providing a student a score after each writing session. The score is the total words written (TWW). There is a writing session each week and a student is informed of his or her current TWW after each session. In addition, the student is also prompted on whether the TWW is higher or lower than that of the previous week. Whether this actually has an effect or not is the subject of a research article published by Truckenmiller and coworkers.

Apparently, it does as summarized in the following figure:


The results of the intervention are labeled Feedback (square points) in the above figure. Practice is identical to Feedback, students work on writing sessions each week but do not receive feedback on their TWW score. Students in the Control group also receive some information on their performance but these scores are based on parallel mathematics activities. Participants in this study are third-grade students from three elementary schools that serve mostly minority students. More than two thirds of the pupils in these schools also qualify for reduced-price or free lunch.

From the above figure, it seems like when students are provided a running tally of where they currently stand, it helps even in an unrelated subject since the students in the Control group also experience measurable growth. A growth of about ten words in a matter of eight weeks for the Feedback group is quite impressive. The authors have noted that this increase is equivalent to the difference between the averages of third and fourth grade students. Of course, what is measured here is just the total number of words a student writes. The authors claim that there is also a noticeable improvement in correct writing sequences. Still, these are limited to story-writing activities.

As in reading, there is fiction and non-fiction. There is reading for pleasure and there is reading for acquiring knowledge. For me, it took much more than just counting words before I really started to write. I took philosophy, theology, sociology, anthropology, psychology and a number of literature courses before I began writing intelligibly, that is, if one would consider what I write now as such....