February 12, 2015
If I see thirty six legs in a polar bear exhibit, and each polar bear has four legs, how many polar bears are there inside the exhibit? This was one of the questions in my son's math homework last night. He was quite confident. He said he would show me how he actually thought about the problem. So he started drawing "circles", each one with four "smaller circles" inside: 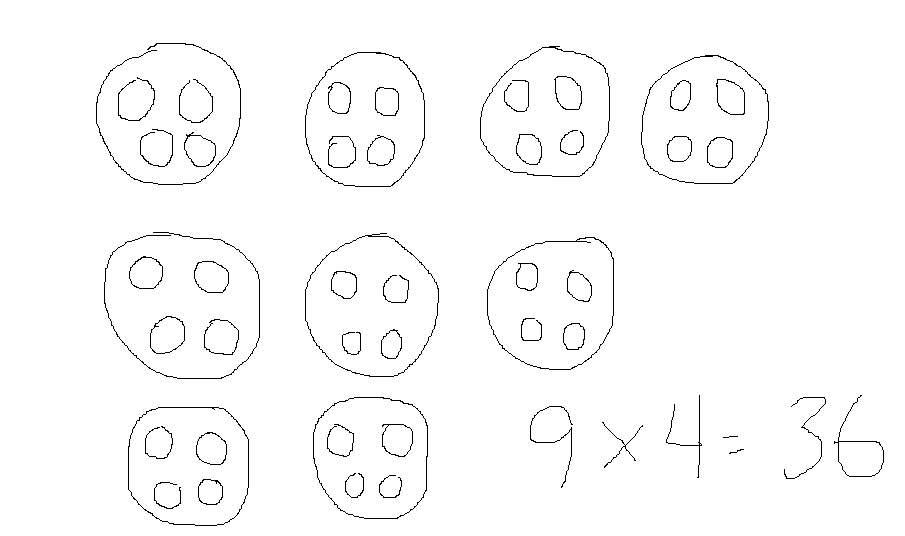 This would also be quite acceptable. In either case, it should be clear that a specific approach to solving the problem was taken. Problem solving can be taught by worked examples. Worked examples, unfortunately, do not necessarily express on their own the line of thought used in solving the problem. There are of course examples out there in various textbooks that attempt to describe in greater detail the strategy employed. Still, in these examples, the strategy remains external to the learner. To develop problem skills, a student needs not only to see examples. A student actually needs to work on the problems. It also helps if the student is aware of his or her strategy.

Teaching students how proficient word problem solvers approach and solve math questions is a cognitive strategy instruction. An example is the Solve It! intervention.

Solve It! is an intervention designed to help middle school children develop problem solving skills in mathematics. Montague and coworkers have recently shown that this intervention works as well with younger (Grade 7) learners. The following is an example of the first step (Read) of Solve It! being implemented in a classroom:


Mr. Wright: Watch me say everything I am thinking and doing as I solve this problem.

First, I am going to read the problem for understanding.

ASK: Have I read and understood the problem? I think so.

CHECK: For understanding as I solve the problem. Okay, I understand it.

Underline the important information. I will underline 12 gallons and $9.95 a gallon and three brushes and $2.45 each.

ASK: Have I underlined the important information? Let’s see, yes I did.

What is the question? The question is “how much did he spend in total?” What am I looking for? I am looking for the total  amount of money for the paint and brushes.

The complete sample lesson can be obtained here.

The observed effect size of Solve It! as an intervention is quite large (0.88). This is almost one standard deviation of improvement. Shown as a graph, applying the Solve It! intervention in a grade 7 class leads to a faster growth trajectory in math word problem solving: