February 27, 2015
Three years ago, when this blog started, retired professor Flor Lacanilao lamented over the media coverage of education policies. In A Critique of Some Commentaries on the Philippine K-12 Program, a stark contrast between who gets wide media coverage and who does not was highlighted. Lacanilao's exact words were "Note further that the nonscientist authors and cited authorities include prominent people in education, and that these nonscientist authors and cited authorities enjoy wide media coverage. I think this situation explains the present state of Philippine education." Lacanilao actually cited one of my articles as among those not receiving attention in spite of his opinion that what I wrote was supported by properly published studies. To establish expertise, Lacanilao was using an individual's record of research contribution as measured by how frequently one's publication had been cited by others. Such measurement, for instance, was reflected on the individual's Google Scholar record.

It turns out that Lacanilao's observations do not apply only to the Philippines. A similar predicament exists in the United States. Curriculum specialist Joel R. Malin and education professor Christopher Lubienski, both from University of Illinois, have authored a paper in the journal Education Policy Analysis Archives that suggests "...analyzing various indicators of expertise and media penetration, we find a weak relationship between expertise and media impact, but find significantly elevated media penetration for individuals working at a sub-sample of organizations promoting what we term “incentivist” education reforms, in spite of their generally lower levels of expertise...."

The following graphs taken from the paper show an inverse relation between expertise (as measured by Google Scholar) and media exposure: 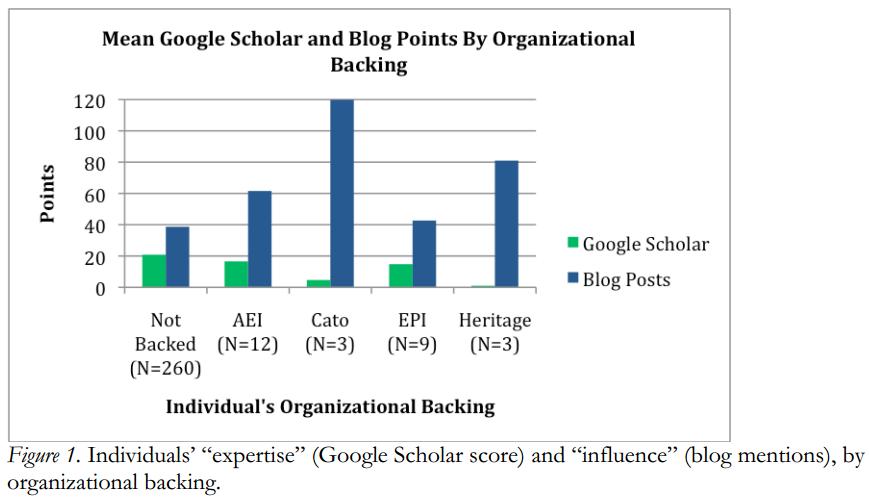 Malin also adds the following in a phys.org article that describes the above paper:

"Our findings suggest that individuals with less expertise can often have greater success in media penetration. Although some individuals might not have formal training in research methods for analyzing the issues about which they are speaking, they possess skills and orientations that make them accessible and appealing to the media. And when these people are affiliated with organizations that have strong media arms or outreach efforts, they have the support and the incentive to engage broader and policy audiences."

So when Lacanilao states that "this situation explains the present state of Philippine education", something similar may be said with regard to US education....