Two Heads Are Better Than One: Is Co-Teaching A Good Strategy?

January 04, 2015
Drug combination is now a common strategy to combat some diseases. Utilizing two drugs simultaneously instead of just one is sometimes better than just using one at a time. In general, there are three possible scenarios when employing two drugs at the same time: synergistic, additive and antagonistic. The combination is synergistic if such pairing results in increased effectiveness relative to each drug working alone. The pairing is additive if the result is a simple sum, but if the mixing leads to a reduction in the potency of each drug then the combination is regarded as antagonistic. Thus, two drugs are not always better than one. In medicine, experiments can be adequately designed to evaluate whether a given drug combination is effective or not. In education, such task, examining whether a combination is effective or not, is much more difficult to do. For instance, the question of whether co-teaching is a good strategy or not remains to be answered.

Instinctively, co-teaching does look promising especially with the old idiom in mind, "Two heads are better than one". Even George the Monster in the Michael Dahl's book thinks that this is always true until he finds out that such phrase still needs to be qualified:

The two heads need to work together. And we do need to address the same question as in the case of drugs: Is the combination synergistic, additive or antagonistic? It is not a given that "Two heads are better than one". It is not a given that co-teaching is effective. Moreover, gauging whether co-teaching works or not is far more difficult than assessing whether a combination of two drugs in fighting a disease is effective or not.


Co-teaching is currently rated with "Use with caution" by the Division for Learning Disabilities (DLD) and Division for Research (DR) of the Council for Exceptional Children: 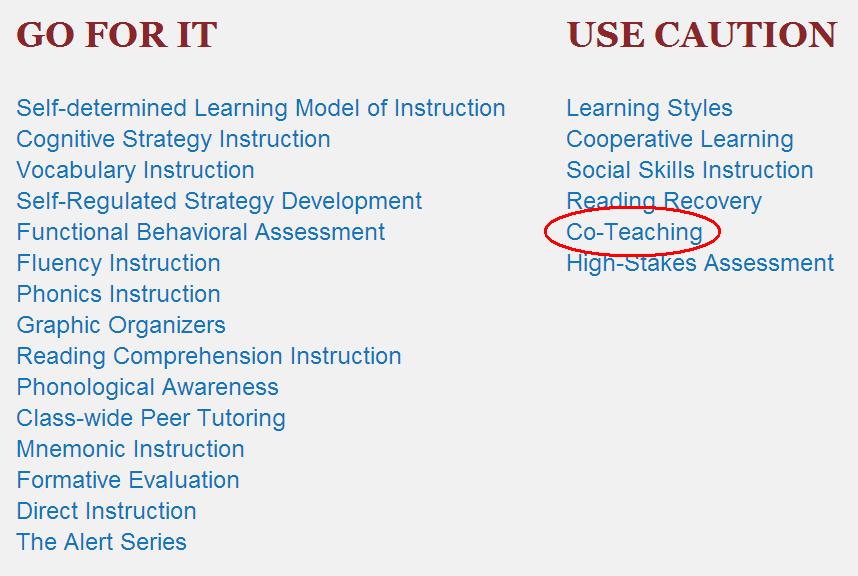 A 2001 meta-analysis of research on co-teaching concludes that further examination is warranted to find out if co-teaching does work or not: 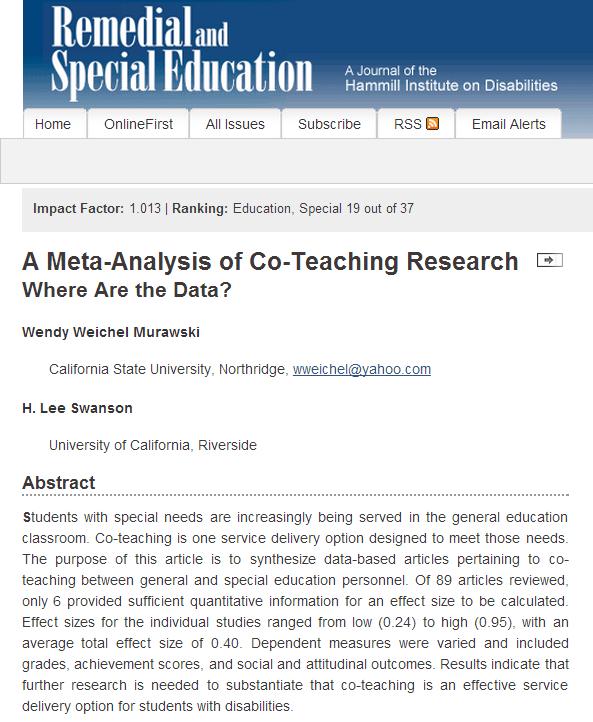 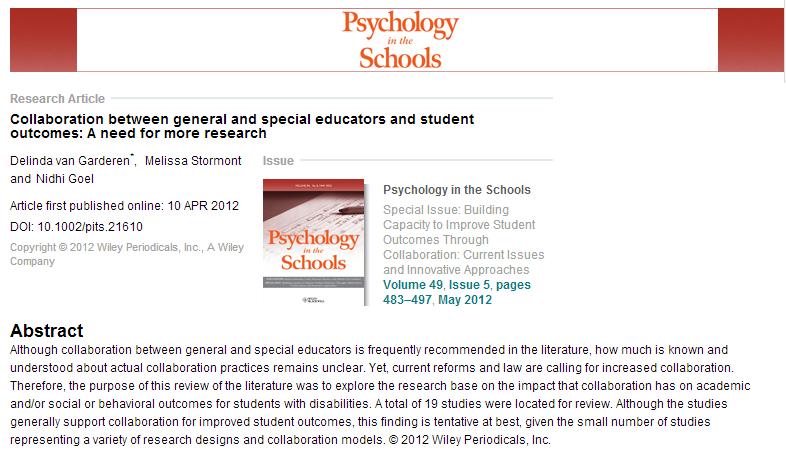 There are even studies that suggest that co-teaching may be ineffective. An example is published in the Journal of Research in Education: 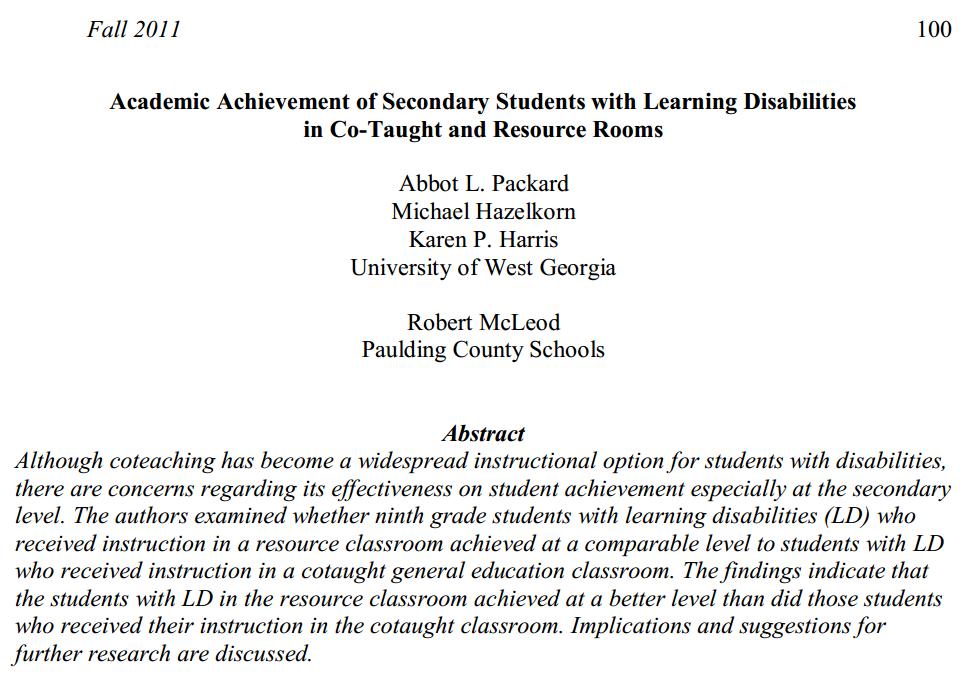 There are various reasons why research is equivocal on co-teaching. First, co-teaching is often employed to address the needs of students with learning disabilities. The area of disabilities alone is one murky field of research. The range of learning disabilities is so vast that controlled experiments are extremely difficult to design and implement. But even with restricting such study only to students with "mild" disabilities, findings are still inconclusive as Sherry Potter reports in a 2011 thesis at the University of Central Missouri. Second, co-teaching can be implemented in so many arrangements: (1) One teaching/one assisting, (2) Station teaching, (3) Parallel teaching, (4) Alternative teaching, and (5) Team-teaching. One-teaching/one assisting often assigns the instructional role to the general education teacher and the supporting role to the special education instructor. In station teaching, the classroom is differentiated by dividing into three sections. These three sections do lessons that are distinct from each other, two are often instruction-based while the third one involves students doing independent seat work. Parallel teaching simply divides the class into two heterogeneous groups of the same size. This basically reduces the pupil to teacher ratio. Alternative teaching likewise divides the class into two groups but the division is not heterogeneous, but based on the current standings of the students with one group requiring remedial instruction. Team-teaching, which is common in higher education, involves both teachers instructing the entire class. The two instructors simply divide the lessons between them. With so many possible arrangements, asking whether co-teaching works or not also requires addressing which arrangement is most effective. Third, in any pedagogical method, proper implementation is key. Co-teaching does not happen by simply making such arrangement. One qualitative study finds that recommended strategies for addressing learning disabilities are not even exercised: 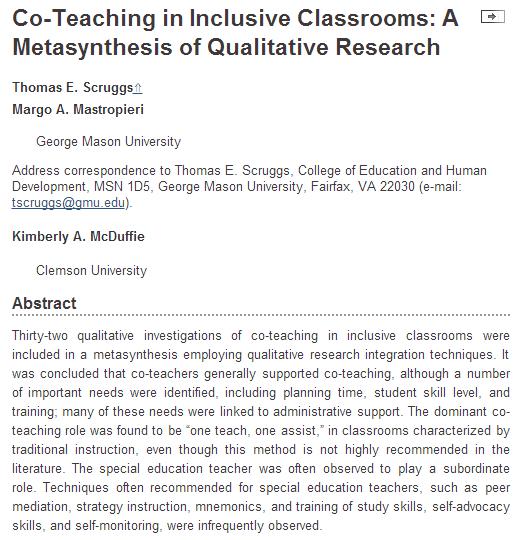 Last but not the least, co-teaching involves teachers. Teachers vary in their effectiveness or strengths. Co-teaching can be viewed as similar to a duet. It only works well when there is blending. It requires sharing, listening and mutual prompting. "Two heads are better than one" only works when the two are in fact working together achieving much more than the sum of each individual can do.

It should now be understandable why co-teaching should be used with caution. In fact, the above may seem indicate that co-teaching is even problematic. It is therefore surprising that co-teaching is widespread in schools in the United States. The Department of Education reports in 2010: "Today, 57 percent of students with disabilities are in general education classrooms for 80 percent or more of their school day." The key to understanding why this is the case is realizing that measuring outcomes should not be restricted to test scores alone. The following study provides a wider perspective through which co-teaching should be viewed: 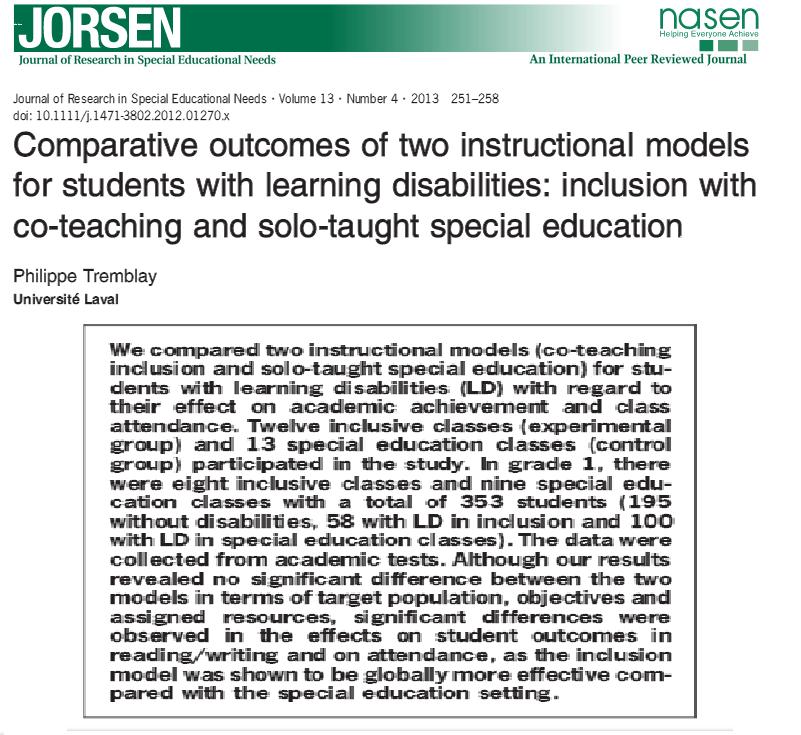 By just adding one measure, attendance, positive effects can be seen from co-teaching. The key word here is inclusion. With co-teaching, segregation is no longer necessary. Assessing learning disabilities is not fool-proof especially in the early years of education. At least, co-teaching could mitigate how we oftentimes wrongly classify and separate children from each other....