January 24, 2015
Last night, my two children and I had a mental activity. First, I recited four digits and they had to recite them in the reversed order. Both were able to do it. Then we started working on five digits. They still could do it, and we even reached seven. This is an example of measuring an individual's number storage capacity. The span of digits an individual can recall and recite backward quantifies working memory. Working memory is like a mental scratch pad on which information is both stored and manipulated.


The following data correspond to eight-year old children. Seeing this table explains why I am a bit surprised that my son could do seven digits in reverse order. 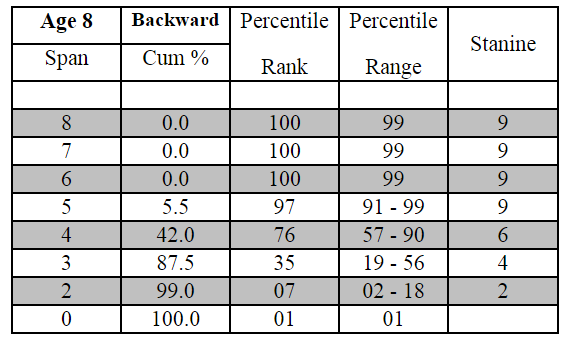 What is noteworthy in the above study is that the relationship apparently fades in the later years. One must keep in mind that the above study like most research in education is a mere observation of a correlation and not necessarily causation. Furthermore, there are specific relationships found in the study that appear quite puzzling. One example is the observation that a child's ability to retell a story predicts initial math performance but not reading comprehension. Being able to recall details of a story, on the other hand, does relate to better performance in reading comprehension, but does not correlate with growth in math competency. On the other hand, the backward digit span task (the activity described at the beginning of this post) correlates very well with performance in both reading and math.

What is truly inside the relationship between working memory, attention, and academic achievement is still unknown. If I would hazard a guess, the relationship between academic tasks and cognitive abilities might even be bidirectional. Both attention and working memory grow with a child. Clearly, these skills may be caught or learned through the elementary years. It is possible that a child does improve his or her working memory by working on math activities inside school. It is possible that reading activities enhance a child's cognitive skills. Oftentimes, too much emphasis is placed on what a child has. After all, schools are supposed to help a child grow and develop.  Thus, what is measured in the above study may just be the outcomes from spending some useful time in schools and that is why there is a correlation.

Going back to my grade school years, I did have teachers who had always demanded my attention. I had teachers who inspired me to work harder. Whether it is the inspiration or the attention that actually led to my satisfactory performance is not clear since my teachers also taught me how to add, subtract, multiply, divide, read and write. These were all in one package....