How Well Do Our Teachers Know Arithmetic?

January 22, 2015
Arithmetic knowledge is as essential as literacy. Arithmetic knowledge must go beyond whole numbers since fractions or percentages appear in almost every occupation, even in fields outside of STEM (Science, Technology, Engineering and Mathematics). As a typical example, leaving a correct tip in a restaurant requires fraction arithmetic. Arithmetic knowledge involves both operation and concepts. It is important not just to know how to add, subtract, multiply and divide but also to understand what these operations really entail. After all, calculators can do all of these operations. A conceptual understanding of arithmetic operations cannot be obtained from a calculator. Such understanding is crucial to both science and engineering. It is equally advantageous for a society as a whole if individuals have a sense of what numbers and operations really mean. Arithmetic errors can be often spotted and good estimates can be made without actually performing the calculations.

A more recent example of how fractions may creep into our daily lives is the question of whether the Patriots intentionally deflated their balls or not. A science teacher posted the following on Reddit:


[–]Patriotsniknight_ml 35 points 3 days ago*
(Note: I have made corrections to the above post (in blue) since the author originally made an error in converting 49 degrees Fahrenheit to Kelvin)

Measuring how well an individual can do arithmetic operations is straightforward. The examples below simply test whether one could add, subtract, multiply and divide fractions:

Being able to do the above tasks or procedures, however, does not mean that an individual truly understands what the above operations mean. To measure conceptual understanding, one may require an estimate instead. For instance, one may ask the question:

Is the following statement true?

Multiplication is first learned in the elementary years with whole numbers. Children are often introduced to multiplication as a simple repeated addition, that is, 5 times 3 is 3 + 3 + 3 + 3 + 3. Addition, of course, is associated with numbers getting bigger. And this is true for fractions as well:

Handling fractions is known to be challenging. Even in college, one may notice that a firm grasp of what fractions truly entail is commonly lacking among non-science majors in introductory science courses. Robert S. Siegler and Hugues Lortie-Forgues at Carnegie Mellon University therefore examined closely where this lack of knowledge comes from in a recent paper published in the Journal of Educational Psychology:

Conceptual Knowledge of Fraction Arithmetic.
Siegler, Robert S.; Lortie-Forgues, Hugues
Journal of Educational Psychology, Jan 19 , 2015, No Pagination Specified.http://dx.doi.org/10.1037/edu0000025
Assessing conceptual knowledge via "True or False" or "Greater than or Less than" questions also offers an additional glimpse to the problem, as implied in the above abstract. There are only two possible answers to these types of questions. This means that without the knowledge, just by chance, an individual may score fifty percent on these tests. Scoring less than fifty percent therefore implies not only a lack of knowledge but also the presence of misinformation. The results are summarized in the following figures:

The preservice teachers in this study come from a selective teacher-training program in Quebec, Canada. These teachers intend to teach arithmetic at the kindergarten to grade six level. Based on standardized academic performance, these individuals are above average. Quebec is also the highest performing province in Canada in the standardized PISA test, with scores equal to that of Japan. Yet, one notices that the teachers are already weak in division of fractions. The study also notes that these assessments took place after these teachers have completed a course that prepares for fractions instruction. Nevertheless, all (preservice teachers, middle school students, and science majors) perform satisfactorily on tests assessing skills on operating fractions. These are not "True or False" questions so scoring fifty percent still means something.

The results from the tests that gauge conceptual knowledge are depicted in the following figure: 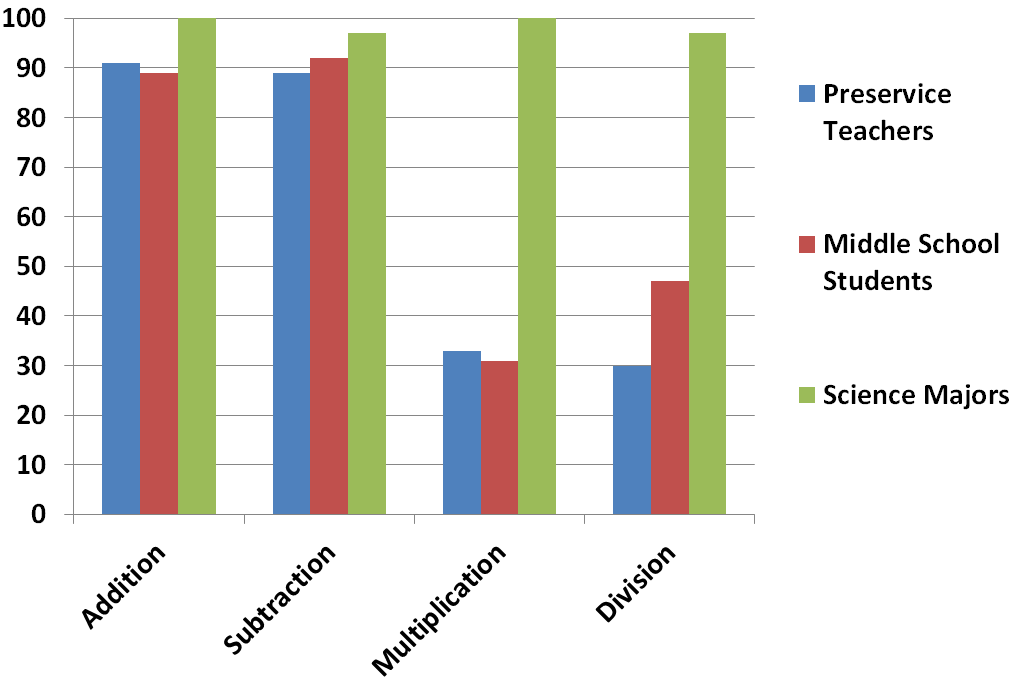 The above clearly shows a lack of conceptual knowledge regarding multiplication and division involving fractions. The scores are less than fifty percent for both preservice teachers and middle school students. The middle school students in this study, by the way, are from the United States. Since the scores are below what one may get by simply randomly guessing, the above results suggest that not only is there a poor understanding of fraction arithmetic, but also misconceptions. Since both preservice teachers and students do not perform well, the problem most likely lies in how fractions are taught. While there is satisfactory performance in both addition and subtraction, multiplication and division are both problematic. This suggests a whole number bias, generalizations drawn from multiplying and dividing integers are being incorrectly applied to fractions.

The above results are therefore highly informative. It points to a possible solution. As the authors have suggested, a teacher may make a difference by simply rephrasing how one explains multiplication, for example. 3 times 5 is often recast as 5+5+5. One may say instead "3 of the 5's". It is a subtle difference, but it equally applies to fractions, as in 1/3 times 5 is correctly translated to "1/3 of the 5".

If one has a good conceptual understanding of fraction arithmetic, Patriots fan or not, one can see whether weather conditions can in fact explain the case of deflated footballs. Of course, this requires the lesson that comes after fractions, ratio and proportion, and a lesson in chemistry on gases, specifically, the Gay-Lussac's Law. Nevertheless, the results above that illustrate what is lacking in our teachers' and middle school students' understanding of fractions is far more consequential than wondering whether the Patriots cheated or not.