Inductive and Deductive Teaching in Science

January 12, 2015
Science education is challenging. To some, science seems like a mere collection of facts waiting to be memorized. Not surprisingly, skills scientists exhibit are often emphasized in teaching science in primary and secondary schools. Since science does deal with a large amount of information about the world we live in, generalizations are greatly sought. Explanations that apply to a multitude of cases are theories worthwhile to both teach and learn. In high school, it is the deductive reasoning that is most often used to teach science. General rules are first taught and are applied to specific cases until a conclusion is reached. This is often called "top-down" logic. Drawing a hypothesis, performing experiments and making observations, and explaining the results is a common description of the scientific method. But scientists do not always work in this direction. There is likewise inductive reasoning or "bottom-up" logic. The difference between deductive and inductive reasoning is nicely explained in the following excerpt from Research Methods Knowledge Base:

In this second book, Bacon offers an example of the process that of what he calls true induction. In this example, Bacon attempts to grasp the form of heat.
The first step he takes is the surveying of all known instances where the nature of heat appears to exist. To this compilation of observational data Bacon gives the name Table of Essence and Presence. The next table, the Table of Absence in Proximity, is essentially the opposite—a compilation of all the instances in which the nature of heat is not present. Because these are so numerous, Bacon enumerates only the most relevant cases. Lastly, Bacon attempts to categorise the instances of the nature of heat into various degrees of intensity in his Table of Degrees. The aim of this final table is to eliminate certain instances of heat which might be said to be the form of heat, and thus get closer to an approximation of the true form of heat. Such elimination occurs through comparison. For example, the observation that both a fire and boiling water are instances of heat allows us to exclude light as the true form of heat, because light is present in the case of the fire but not in the case of the boiling water. Through this comparative analysis, Bacon intends to eventually extrapolate the true form of heat, although it is clear that such a goal is only gradually approachable by degrees. Indeed, the hypothesis that is derived from this eliminative induction, which Bacon names The First Vintage, is only the starting point from which additional empirical evidence and experimental analysis can refine our conception of a formal cause.
Thus, inductive reasoning can be taught by constructing three tables or sets of data. We can apply this for example in teaching the hydrogen bond, a very important theory in chemistry. Here are the three tables:

The property that is highlighted here is the temperature at which the compound boils into a vapor phase at atmospheric pressure. The boiling point is essentially a manifestation of how strongly ethanol molecules are attracted to each other. A higher boiling point means stronger attractions between molecules in the liquid phase. The hydrogen bond is one attractive force that can be present between molecules.

The above molecule is quite similar to the previous one. Both  have the same number and type of elements, 2 C's, 6 H's and 1 O. The difference is: In ethanol there is an O-H (a hydrogen is attached to an oxygen) while in dimethyl ether all the hydrogen atoms are attached to a carbon (C) atom. Of course, more examples should be used for both tables 1 and 2.

The final table, a set of data that show gradation, could be the following:


In this set of data, students are then given the opportunity to quantify hydrogen bonding and realize that it applies not only to O-H, but also to N-H and F-H.

The above is simply an example of how inductive reasoning can be applied in teaching a concept in science. Clearly, for students to grasp the underlying deep structure of a natural phenomenon, sufficient scaffolding or support is required. In this particular case, the scaffold is provided by following Bacon's three tables for inductive reasoning. Whether such an approach is effective or not in teaching science has been recently tested by Shemwell, Chase and Schwartz: 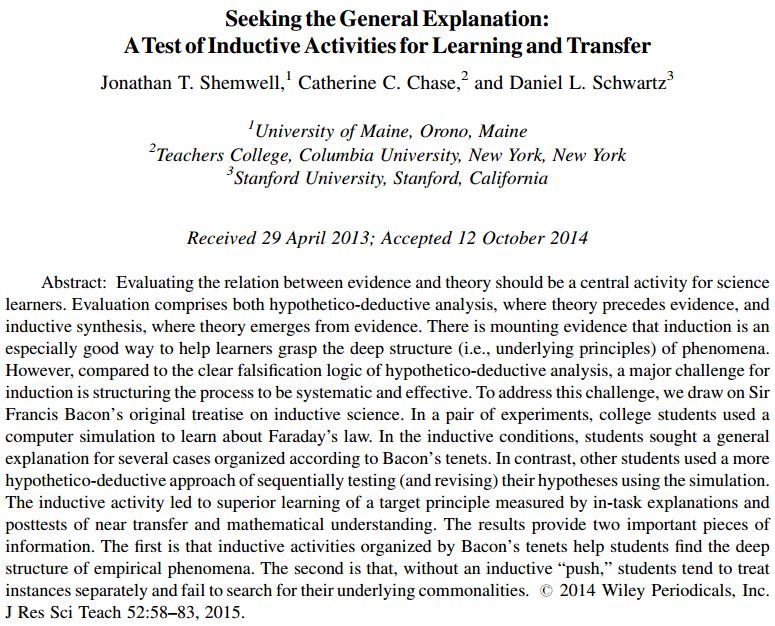 In the above work, the concept taught is Faraday's law and the results summarized in the following figure suggests that the inductive approach is much more effective:

ID in the above figure makes use of inductive reasoning in teaching, CC simply prompts students to compare and contrast, LCID uses a similar set of tables but the absence is of low contrast, and HD is the prevalent deductive way of teaching.

Teaching science in an inductive way does sound like discovery-based learning. It is indeed similar. It is bottom-up after all. However, one must take note that a scaffold is very important. Generalizations are not easily drawn by novices. Essence, Absence and Degrees are important tables. These tables serve as guides through which a particular theory, law or concept in science can be effectively taught.