When Should a Child Start Schooling?

November 30, 2014
There is evidence that shows benefits from quality preschool education. A good preschool program can decrease educational gaps between children from high- and low-income families. These gaps are often associated with the limited vocabulary and experiences children in poor homes have. There are, however, gaps observed in the early years of schooling that are not related to family income at all. Children also develop at different rates. There are obviously age differences since birth dates are distributed all throughout the year. Thus, in one kindergarten class where the school entry age is five years old, there are children who just turned five while there are children who would be six after only several weeks in school. A difference of about six months to a year in age can be substantial at a young age. Six months in five years is after all ten percent in terms of time. In terms of skills and knowledge already acquired, the differences can therefore easily be substantial.

Datar and Gottfried recently published a paper in the journal Educational Evaluation and Policy Analysis: 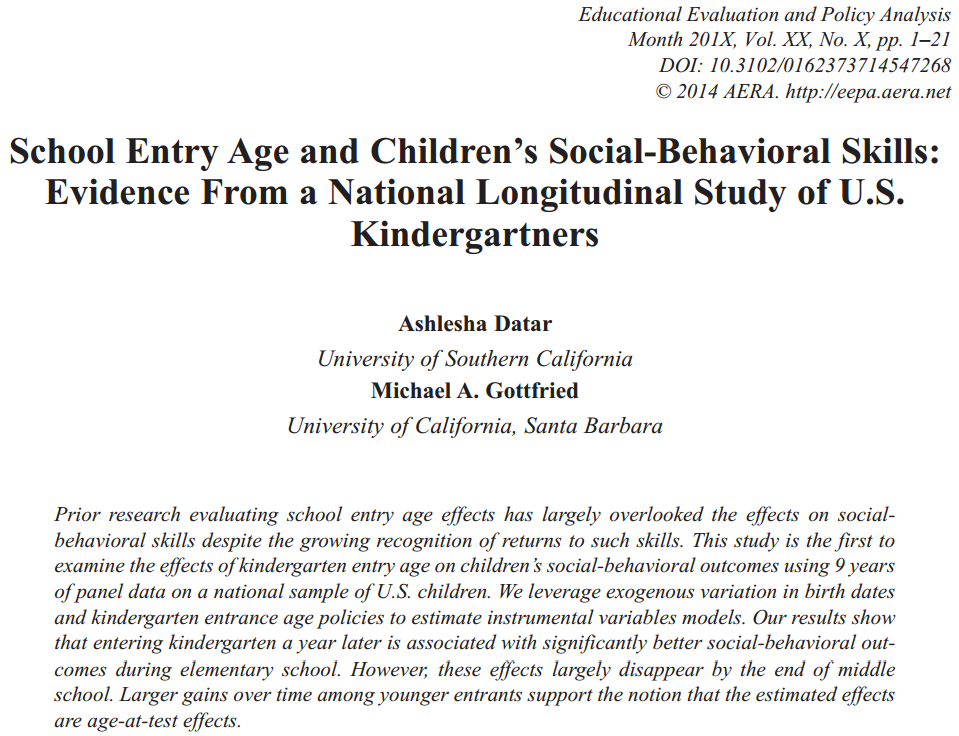 Datar and Goddfried did find gaps between students due to kindergarten entry age. These gaps are obtained after correcting for various other factors (demographics, school, teacher and classroom characteristics). The differences are quite significant at the start of schooling - kindergarten. The advantage of older children remains substantial at first grade, but diminishes with later years. In fact, at eight grade these gaps no longer exist. The following are the results of a 9-year long longitudinal study which followed about a thousand kindergarteners back in 1998.

Younger children are able to catch up. This study does not really answer when a child should start schooling. As time passes by, a year or a fraction of a year becomes less significant. What the above study clearly points out, however, is the inappropriateness of tracking, holding back, and diagnosing with learning difficulties at the early grades.