November 13, 2014
The Alliance of Concerned Teachers (ACT) in the Philippines has scheduled a sit-down strike this coming Friday, November 14, 2014. The International League of People's Struggle (ILPS) has likewise issued a press release calling for support for the teachers' demands:


"...Teachers and education employees are demanding an increase of their monthly basic pay from P18,549 to P25,000 and from P9,000 to P15,000 respectively. They have started this campaign since last year. The demand seeks to pursue the living wage needed to cope with the unprecedented monthly rise in prices of food and other basic commodities...

Teachers in public elementary and high schools in the National Capital Region are expected to participate in the strike. Public sector workers are seeking for decent pay increase but budgetary allocations by the national government are largely siphoned off by corruption of pork barrel funds such as the Disbursement Allocation Program (DAP) assiduously defended by Malacanang Palace...."

The question of whether teachers should go on strike had been discussed in a previous post on this blog, "Should Teachers in the Philippines Go On Mass Leave?":


Teachers' strikes are not purely driven by the interests of the teachers. When teachers are overworked and underpaid, such conditions will take a great toll on students' learning outcomes. Poor working conditions can adversely affect student learning in the classrooms. Teachers go on strike to raise awareness and alert the public of something seriously wrong about public school education. Strikes always happen when there are problems already in school. For this reason, it is quite difficult to address the question of whether teachers' strikes harm learning. Furthermore, when strikes do help teachers get their demands met, these may be solutions to the schools' problems and can therefore affect the students in a positive way. Nevertheless, there are studies that tried to answer the question. From these studies, the conclusion is that there is really no hard evidence that teachers' strikes harm students.

Strikes come in different flavors. What ACT is planning to do this time is a sit-down strike for a day. On the Facebook page of ACT, the following post can be found: 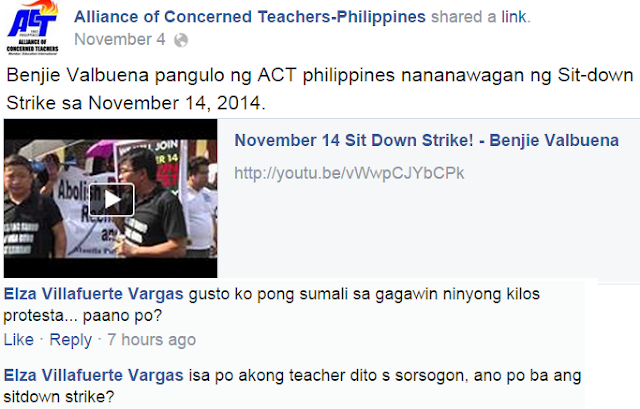 ACT president, Benjie Valbuena, is asking teachers to join the sit-down strike. One comment is shown here. Elza Vargas apparently is interested in joining the protest, but is not aware of what a sit-down strike is. Here is what Wikipedia says:

It means teachers are expected to show up in their classrooms, but they are not going to teach. Here is a photograph from the 1965 sit-down strike of teachers in Michigan:

What will happen inside the classrooms during the strike depends on whether parents would send their children to school on that day. If pupils go to school, there would be no instruction from teachers participating in the strike and one may just witness a scenario similar to the one described below: 1500 pupils gazing perplexedly at their teacher from their classroom seats:

Or pupils may just do what they normally do when they cut classes, go to the mall....