I Had a Good Teacher

November 23, 2014
In the small town of Paete in the Philippines, local folks affectionately refer to their school principals as "apples". Although the apple has been associated with the downfall of man in Genesis, the fruit has certainly overcome this image by becoming part of one of the most important rooms in our lives, the classroom. Binkovitz in the Smithsonian writes in "Why Do Students Give Teachers Apples and More from the Fruit’s Juicy Past":


...Shaking its association with hard cider and reckless imbibing, the apple found a place in one of the most faultless places of American society: the schoolhouse.
Held up as the paragon of moral fastidiousness, teachers, particularly on the frontier, frequently received sustenance from their pupils. “Families whose children attended schools were often responsible for housing and feeding frontier teachers,” according to a PBS special, titled “Frontier House, Frontier Life.” An apple could show appreciation for a teacher sometimes in charge of more than 50 students....

Apples have certainly become synonymous with our beloved teachers.

Teachers do touch our lives in so many ways. And if we were fortunate to finish high school, we likely had come across scores of teachers. In elementary school, where oftentimes one teacher is assigned to handle most of the subjects, the impact of one teacher can be quite significant. One good teacher is usually enough to change the future of a child.

When I was in grade school, I had the fortune of having the same teacher in both grades 5 and 6. I still could remember her last name and I actually had to remember two because she got married midway between those two years. She thought I was a genius in math when I was 11 years old since I could figure out the number of miles light would travel in one year. She cultivated in me an appreciation of math and the sciences. She was in fact instrumental in directing me to enroll in a science high school. She also knew my weaknesses but she showed leniency, patience and tolerance. I was quite aware that she knew that I was still growing up, but at the same time, she was hopeful and confident that I would rise to the occasion someday.

Certainly, there are also individuals in my teachers' list whom I may consider as bad apples.

It is difficult to sort out how my teachers have contributed to who I am right now. It is therefore amazing to see that several workers at the National Bureau of Research (NBER) have attempted to quantify the impact of teachers on our lives. For instance, in "The Long-Term Impacts of Teachers: Teacher Value-Added and Student Outcomes in Adulthood", one finds the following figure: 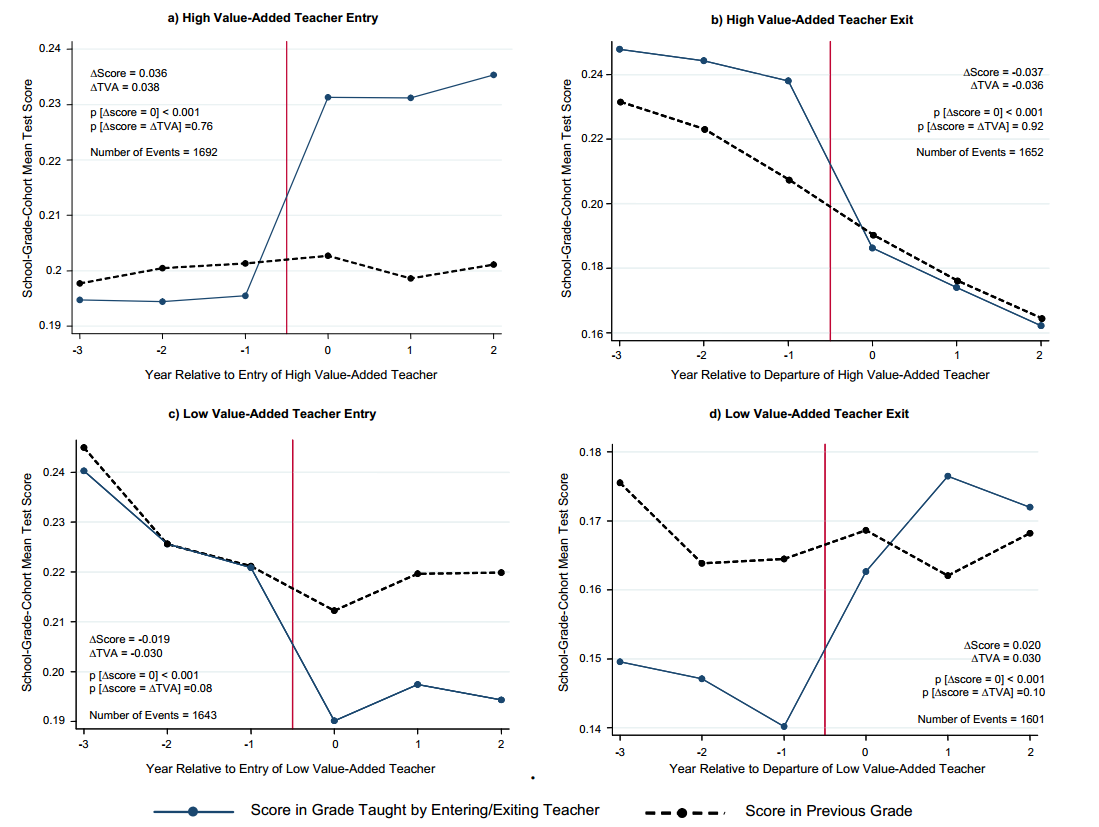 The graphs above map the mean test scores of students across several years with the midpoint marking either the entry or exit of either a high or low value-added teacher. Certainly, at first glance, one is led to believe that the entry of a high value-added teacher improves test scores (This is graph a in the above figure). The exit of a high value-added teacher, on the other hand, as depicted in graph b, coincides with a drop in scores in the years to follow. This, however, is not as crystal clear. In all of these graphs, scores of students not taught by the teacher considered are also shown. These scores are shown as dashed lines. And except for the first graph, these dashed lines are not flat. In fact, in b the dashed line is clearly heading downward. There are so many factors that can affect students' scores in exams. One may even suggest that the school depicted in b is already facing challenges and this may actually be the reason why a high value-added teacher has decided to leave. One must also keep in mind that the points above are mean scores. Plotting all the scores individually on such graphs would probably make it extremely difficult to discern the trend suggested by simply using mean scores.

Scores in exams, college graduation, future employment and salaries, or even teen-age pregnancy may be justified measures of success or failure, but one cannot deny that these outcomes are not only multivariate but are also incomplete. The teacher factor is certainly significant in learning outcomes but it is not the only one.

There are good and not so good teachers. And oftentimes, just one good teacher can make the difference. I know I had one....