Take a Number and Wait

August 03, 2013
Belle Waring of NIH Record talks about how some of the buildings within the National Institutes of Health (NIH) campus in Bethesda, Maryland are named in "Take a Number and Wait". There are more than eighty buildings and most are simply labeled with a number. More than ten years ago, I spent a year in a laboratory supervised by Robert Tycko. The laboratories were house in a building called Building number 5:


Why are buildings inside the campus considered as the world's foremost medical research center bear boring numbers as names? It is only proper. The NIH is a federal agency, its operation and infrastructure are supported mainly by public funds. Back in 1999, an attempt to name its public library after a senator was stopped in Congress:


The committee acted after Rep. Tom Coburn (R., Okla.), a physician, complained that it was inappropriate for a public building (National Library of Medicine) to be named for a sitting member of Congress (Senator Arlen Specter).

"The point is that when members of Congress participate in self-congratulations, it only increases public cynicism," said Michael Schwartz, Coburn's spokesman. "It creates the impression that members of Congress are down here running the country for their own benefit. It's frankly shocking that the senator didn't see that it was wrong in the first place."

A spokesman for Specter said yesterday that he agreed to have the provision taken from the bill after Coburn complained.

"His [Specter's] reaction is that to begin with he was honored, but this was not something that he ever sought, and when a concern was raised, he readily agreed to its removal," said Charles Robbins, an aide to the four-term senator.

His legendary accomplishments on behalf of biomedical research include: recognizing the potential of stem cells and holding hearing after hearing to bring to the forefront the importance of federal funding to support this research; doubling of the NIH budget between FY 1998-2003; the establishment of an NIH Office of Emergency Medicine; the creation of the Cures Acceleration Network; and securing $10 billion in the Recovery Act to provide an immediate infusion of new research dollars for the NIH in 2009.

Yet, the National Library of Medicine remains to be called Building 38.

In the Philippines, the situation is quite different. I recently came across the following photographs. The first one comes from an elementary school in Pila, Laguna and the second from Paete, Laguna:


I do not have a close-up shot of the backpack, but it looks like it bears the faces of the current governor of Laguna, Ejercito, at the center, and on the upper right hand corner is a photo of a former president, Estrada, and on the upper left is the national hero, Jose Rizal: 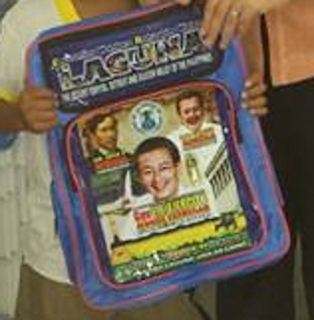 The mayor of Paete, Laguna, jokingly comments that the backpack helps elementary pupils in history, current events, and social studies. There is another school in Laguna, in the town of Nagcarlan, the Crisanto Guysayko Memorial Elementary School. Here, there is a slightly different picture:

The following provides a clearer close-up photo of the bag. It seems to have a small photograph of Rep. Sol Aragones:

The minds of the young are quite impressionable. One must not forget that these students come from poor families. With the above practices what lessons are we really teaching the students and what message are we sending to their parents?

Aside from seeing cutting edge research on Alzheimer's amyloid peptide, I did learn one important lesson from the NIH. I just hope the people of the Philippines learn this one too. "Take a number and wait".