We do not get to choose our families. At the time we are born, we do not get to pick which home to live in. Poverty in several ways is similar to race. We inherit it from our parents. Unlike race, however, poverty is not necessarily a permanent condition. If opportunities exist, people should be able to climb out of poverty. Education is oftentimes regarded as a way out of poverty. But poverty affects education. Thus, it is important to become aware of poverty and how it affects learning. Without such awareness and attention, education can even magnify income inequality. With the wrong policies and reforms, education can certainly make matters worse. Thus, efforts are not enough. The right actions are needed. Misguided reforms can do harm. A wrong medicine does not simply fail to cure the illness. In some cases, a wrong prescription can kill.

There is poverty even in a highly developed country like the United States. A report from the Educational Testing Service by Richard J. Coley and Bruce Baker, "Poverty and Education: Finding the Way Forward", highlights poverty in America and its relationship to education outcomes:


The following figures from the report tell a lot about poverty and education: 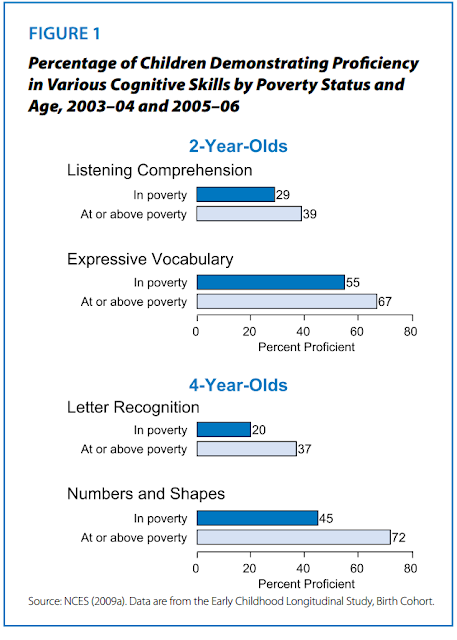 The first figure above illustrates the achievement gap right at the beginning of early childhood. This gap widens enormously even just in a period of two years, from 2-year old to 4-year old children. 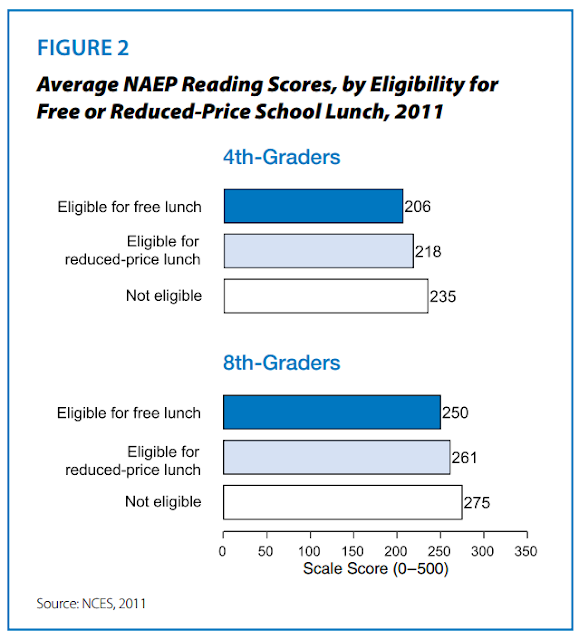 Public schools in the US provide free lunch to children of poor families. Eligibility for free lunch is therefore a good measure of a child's poverty and with reading scores in both grades, 4 and 8, children who are coming from low income families are not performing as well as other children in reading. 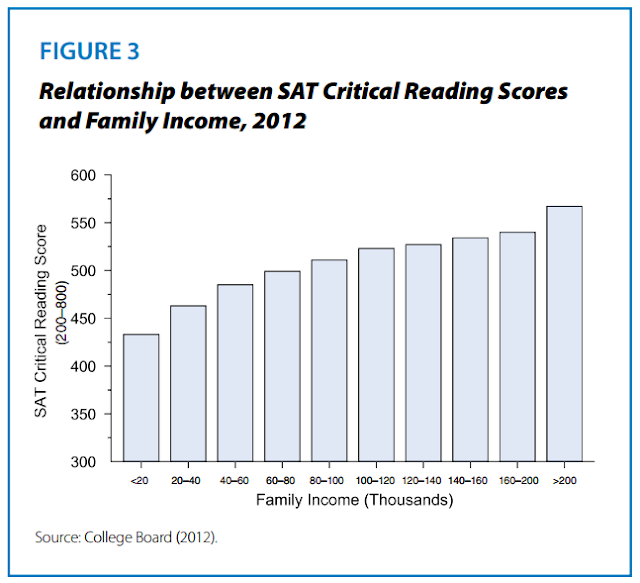 The scores above are from standardized tests which are used by colleges for admissions decisions. It is very clear that scores in this exam strongly correlate with family income. 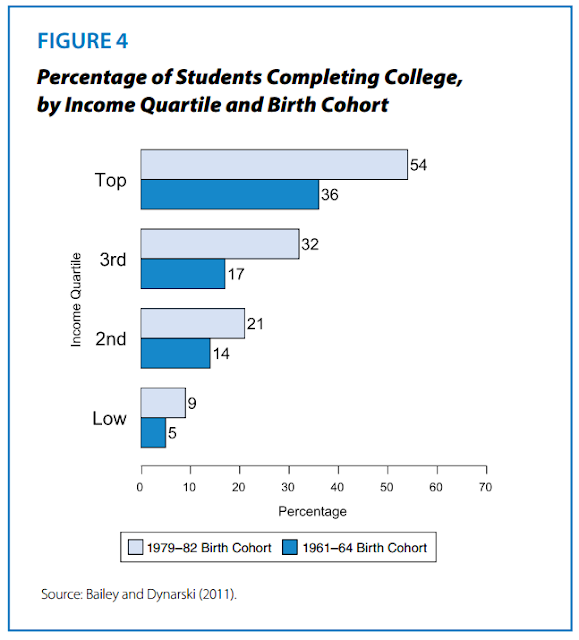 In the above figure, those who were born in the 60's are being compared with those born in the 80's. Looking at the entire picture, it is obvious that a lot more are finishing college. Unfortunately, the increase is not happening uniformly across all income levels. Most of the marked improvement in college graduation is occurring among the top income quartile. 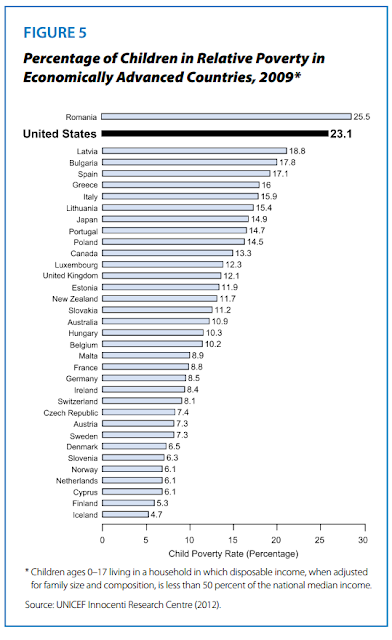 This may be shocking, but the United States ranks almost at the top in child poverty rate among developed countries. The above numbers and the realization of how poverty adversely affects education should explain in part why the United States is not doing as well in international standard exams even though the country has some of the best performing students in the world.

Now that the numbers are in front of us, what is to be learned? The report writes:

While education has been envisioned as the great equalizer, this promise has been more myth than reality. Today, the achievement gap between the poor and the non-poor is twice as large as the achievement gap between Black and White students. The tracking of differences in the cognitive performance of toddlers, elementary and middle school students, and college-bound seniors shows substantial differences by income and/or poverty status. These differences undoubtedly contribute to the increasing stratification in who attends and graduates from college, limiting economic and social mobility and serving to perpetuate the gap between rich and poor.

The above simply states the problem. What needs to be done? The report recommends the following:


The child poverty rate, without any doubt, is much higher in the Philippines. Achievement gaps are likewise expected among low and high income groups. Thus, one may use the above recommendations to gauge how effective DepEd's K to 12 is in addressing the problem of poverty and education. Under DepEd's K to 12, are the schools that have greater needs being attended? Under DepEd's K to 12, are voluntary kindergarten teachers who do not even get paid for more than a year really contributing to high quality early childhood education? Under DepEd's K to 12, are there incentives for good teachers to go and stay where they are needed the most? Or is the government rewarding bonuses to teachers who happen to be in schools where there are less poor students? It is clear that none of the new school practices (short instructional hours, less demanding curriculum in early reading and writing, spiral curriculum) are based on good evidence so I would not ask the question on whether DepEd's K to 12 is adopting effective school practices. Therefore, I think one may arrive at a conclusion similar to what Helen Ladd said about US education reforms:

“Because these policy initiatives do not directly address the educational challenges experienced by disadvantaged students, they have contributed little — and are not likely to contribute much in the future — to raising overall student achievement or to reducing achievement and educational attainment gaps between advantaged and disadvantaged students. Moreover, such policies have the potential to do serious harm. Addressing the educational challenges faced by children from disadvantaged families will require a broader and bolder approach to education policy than the recent efforts to reform schools."

And Confucius said, "When a country is poorly governed, riches and honor are things to be ashamed of."