August 22, 2013
Here are some data for the United States regarding student loans that have been collected by the American Student Alliance:


In the US, college tuition fees continue to rise while state funding of higher education institutions falls. The Philippines faces the same challenge. The state of Oregon has recently approved a plan. Oregon House Bill (HB) 3472 passed the House (59 Yes, 0 No, 1 Not voting) and the Senate unanimously. "HB 3472 directs Higher Education Coordinating Commission to consider creation of Pay Forward, Pay Back pilot program to replace current system of tuition and fees required to attend institution of higher education." The idea was first proposed by the Economic Opportunity Institute (EOI). Some of the slides used by EOI in its presentation are the following:


The following are estimates provided by Jason Gettel, a policy analyst from the Oregon Center for Public Policy showing that a student would be able to repay the costs of college education by contributing yearly 3% of his/her annual gross income throughout 24 years right after graduation: 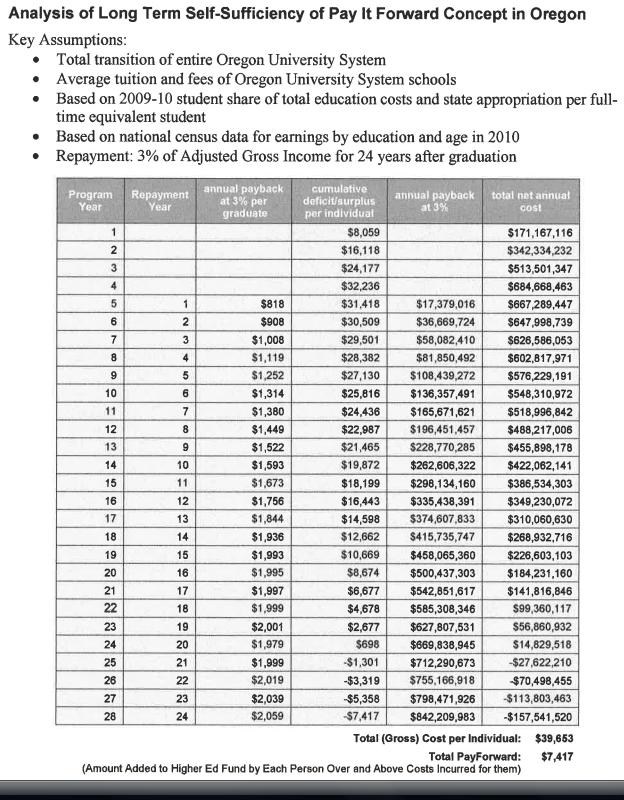 Reading the comments on a Wall Street Journal article describing this bill one gets a feeling that there seem a lot of questions and concerns that need to be addressed. Here are two examples:

This approach raises a few questions: First, whether the annual payments are to be based upon "wages" which are earned through employment or "income" which could come from many sources such as rents, stock dividends, business ownership, etc. Second, whether the approach will penalize economic success because students who earn more will pay more for their education in absolute dollars than their less economically successful colleagues. Third, what will happen to the payments in the case of students who leave the workforce for a number of years, such as in the case of a disability or to raise children.

All this accomplishes is to transfer risk to the taxpayers. It is neutral on influencing the price of tuition. The lower risk for students will only encourage more foolish decisions on majors, if that's even possible. Give away stuff today that will be magically paid for much later. This is standard fare for political thieves.

The problem is well known to be escalating cost. It is mainly driven by increasingly bloated and unnecessary administration. Basically, they're partying on all the money sloshing around. Administration dwarfs teacher salaries and facilities. High pay for executives and staff heading the most absurd offices one can imagine.

Ordinarily, the solution would be to end all subsidies and starve the useless administrators, but I think this would have the effect of creating a situation where we don't take full advantage of our human capital by shutting out perfectly capable but poor potential students.

I prefer less regulation in general, but there are places where everybody acknowledges that some regulation is necessary. Maybe universities need to be treated as utilities because the administrative bloat is runaway madness.