July 09, 2017
The former secretary of Education Armin Luistro, who is now president of de la Salle University, spoke recently in a forum at Ateneo de Manila University. In his speech, he says teachers should not be satisfied in their comfort zone. Teachers must speak on issues of importance to society. Luistro says that teachers can choose between being a "safe and happy teacher" or being a "Filipino teacher". Of course, Luistro has the following suggestion: "from the imposition of martial law in Mindanao to the growing number of suspected drug users and peddlers killed in the Duterte administration’s crackdown on the illegal drug trade".

Since opposition to Luistro's K to 12 curriculum was silenced when he was in power, it is not surprising to see on Facebook the following posts:

From Rey Vargas of Parent's Advocacy for Children's Education: 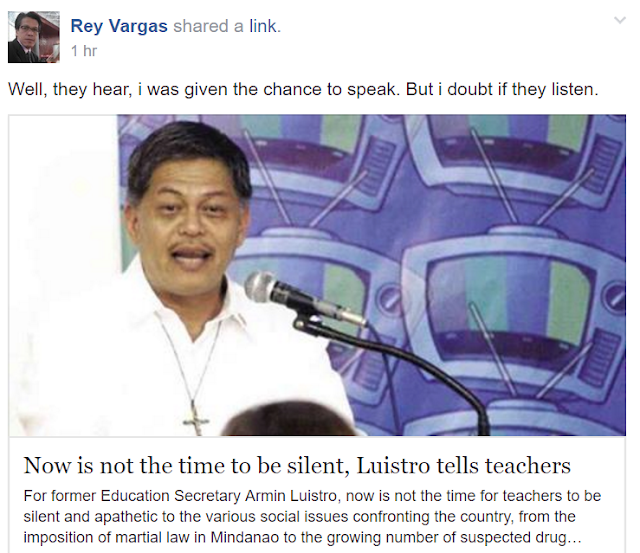 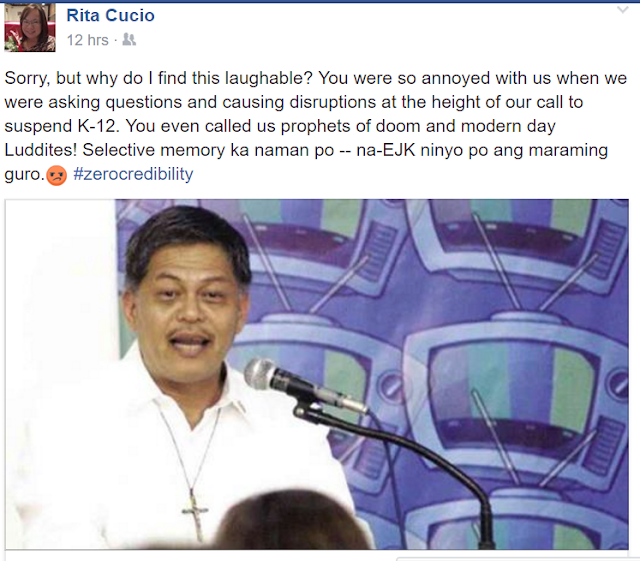 Since one professor of de la Salle University has been targeted in a petition due to an opinion he expressed, this one is indeed timely. This is what Professor Contreras had to say: 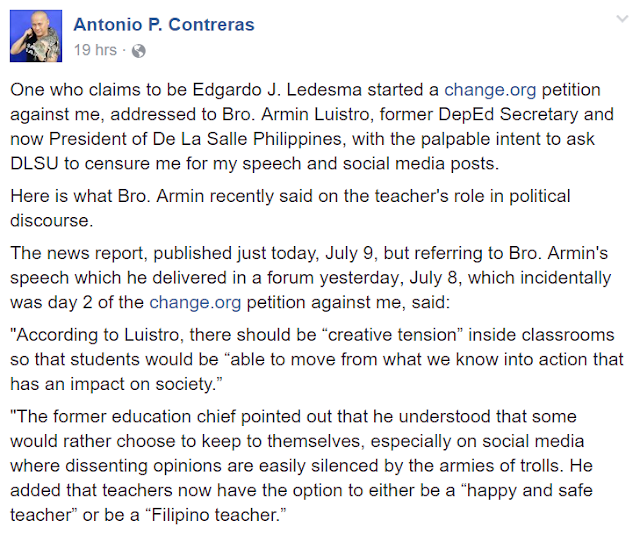 Michael Purugganan joined in this conversation. He recently posted a comment on a previous article on this blog.


...Prof. Contreras may have acted in questionable ways, and he may spout opinions that are equally questionable, but as an academic he needs the protected space to do so. Unless his words or actions clearly constitute a danger to others, we need the freedom within the university to say unpopular things. If only so that their wrongness can be publicly (and academically) debated.

I tried to share my criticisms of DepEd's K to 12 when Luistro was just about to introduce the new curriculum, but the Inquirer would not publish what I wrote unless DepEd was given the chance to comment on what I had to say. That was a classic "catch 22" because DepEd never bothered to respond to my comments. This is one reason behind the birth of this blog.

Luistro, like other members of the former administration, is very selective when in comes to freedom of speech, human rights, and democracy. The fact that he clearly chooses only issues that go against the current Duterte administration only displays that Luistro is politically partisan. Yes, teachers can speak. Teachers should have been allowed to speak long time ago especially when Luistro pushed a grossly half-baked program into Philippine public schools.

We indeed should be able to speak because it is only through discussion that we can in fact determine what is right and what is wrong.