July 08, 2017
Racism and xenophobia are on the rise worldwide, according to a group of experts reports to the General Assembly of the United Nations. One of the experts, Ricardo Singa III, recommends that freedom of speech ends with hate speech and stereotyping. Ron Anderson notes in Politics Paves Path to Bullying World the extraordinary amount of coverage mainstream media in the United States has given to individuals who are making abusive and hurtful remarks. Such celebrity-like coverage may have made these political bullies serve as role models for both young and adults leading to an increase in bullying and hate crimes in the country. Not every disagreement in politics, however, is bullying. There is abuse that should not be tolerated, but there is also a valid discourse. We cannot label each and every statement as bullying simply because it is not to our liking. Doing so simply "undermines the horror of genuine attacks", writes Martin Williams of the Independent.

Bullying is of serious concern in schools. The Centers for Disease Control and Department of Education in the United States offer the following core elements in their definition of bullying: unwanted aggressive behavior, observed or perceived power imbalance, and repetition of behaviors. Anderson offers this definition: Bullying means intimidating or overpowering someone weaker. Bullying targets the weak. Those who are bullied are often perceived as outcasts such as immigrants, minorities, orphans, lesbians, gays, transgenders and bisexuals. Their targets, the weak, make bullying a true nightmare. Bullying should therefore not be trivialized. "We also need to make a distinction between "offensive" and "abusive", concludes Williams.

In the Philippines, I recently came across a petition addressed to the administrators of de la Salle University concerning the online behavior of one its professors, Antonio Contreras. The petition was perhaps catalyzed by this twitter post: 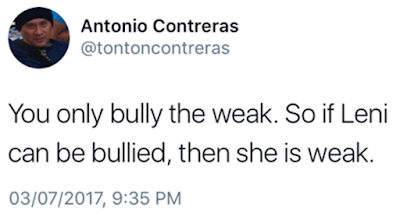 Contreras was reacting to supporters of the vice president, Leonor "Leni" Robredo, who were accusing another government official, Lorraine Badoy, assistant secretary of the Department of Social Welfare and Development, of bullying the vice president. Badoy earlier criticized the vice president for revealing the story of her picking up trash to furnish her daughter's apartment in the United States:

Philippine politicians often resort to gimmicks of painting themselves as simple and close to the poor. The above picture shows the vice president sitting beside a luxurious handbag. Contreras' main point is that this is not a case of bullying. Unfortunately, some people miss that important point.

Bullying is an important concern in schools. Citing cases that are not bullying miseducates both adults and children. As Williams states: "It undermines the horror of genuine attacks".