July 23, 2017
Math is beautiful. Algebra will help you with developing critical thinking skills. You will use it in the future. These are some reasons often provided to justfy making algebra as a required course. One can say the same thing about art. Art is likewise beautiful. You may likewise use what you learn in an art course in your job. Besides, our planet "earth" is simply "eh" without "art". However, there may be a slight difference between art and algebra. Students find algebra as a major hindrance to obtaining higher education. In community colleges, passing algebra has become a barrier to graduation.

Removing algebra as a required course in community colleges has recently gained momentum in Calufornia. Jude Thaddeus Socrates, a professor of mathematics at Pasadein posted the following on Facebook:


But before arriving quickly at such a conclusion, we may need to pause.

First, the challenges of algebra in both high school and community colleges of course lie on so many factors outside of mathematics itself. Poor performance in algebra, as in other academic subjects, correlates with poverty. Poverty is often the real barrier to graduation, not algebra.

Second, algebra provides some unique learning opportunities. Zalman Usiskin, professor of education at the University of Chicago wrote more than twenty years ago on American Educator (Spring 1995) the following: 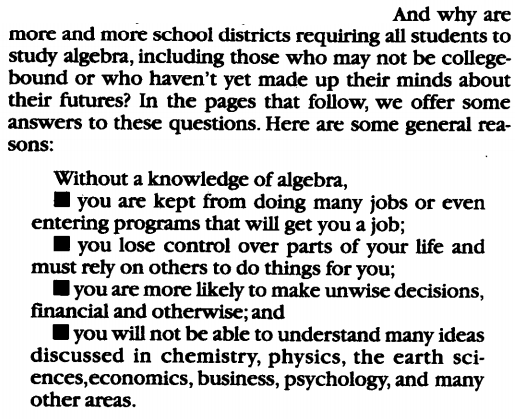 Usiskin cited the following features of algebra:
But most important of all is perhaps conveyed by this thought-provoking parargraph from Elizabeth Staple at PurpleMath:

It might have been assumed, for instance, that Shaniqwa would be pregnant by the time she was fourteen, Jamal would be in prison, José would grow up to be a pool-boy, and Maria would be a maid. So these students would have been assigned to something like "consumer math": low-level math that was presumed to be "useful" for "that sort". Blonde, blue-eyed Tiffany might have been expected to marry well after a short and trivial "career", so she'd have been assigned to bookkeeping. Only Eustace James Whittington III would have had any chance of attending college, so only he would have been steered into the algebra class.

There is indeed one more difference between art and algebra. Algebra can be used as a tracking instrument by either not requiring it or teaching it poorly to students.

Finally, algebra is such a powerful tool that a person not knowing it can be easily taken advantage of by people who do know algebra. If people can do it easily with fake news, they can do as well with twisting numbers.