"Errant Science Scholars in the Philippines"

July 12, 2017
The Commission on Audit (COA) in the Philippines is once again calling for a refund of allowances and other benefits from former students of the Philippine Science High School (PSHS) system who did not enroll in a prescribed science course in college. This time, COA says 115 PSHS graduates owe 18 million pesos. Three years ago, COA wanted 32 million pesos from 121 PSHS students. The math behind these figures somehow does not seem to make sense. However, the fact that the Philippine government expects adolescents to make a life-defining choice at a very young age with serious consequences is much more troubling.

In 2014, COA claimed that 23.5 million pesos were wasted on 48 students who did not finish high school and 73 graduates who did not enroll in the prescribed courses in college. To this number, COA added 8.7 million pesos, an amount the agency suggested could have been generated if PSHS did manage to collect. This partly explains the difference between the two amounts.

The PSHS system provides living allowances. The amount could be as high as 4000 pesos per month if the student comes from a low-income household. Enrolling in PSHS requires passing an entrance exam, thus, selecting only those graduates from elementary school that have good academic background. Upon enrollment, the student and parent signs a contract which includes the following:

...Reimburse to the government the full cost of the scholarship in the event that the scholar willfully abandons the scholarship or fails to take up a science or science-related career at the university level. However, the latter may be subject to a waiver on a case-to-case basis.... ”

What the clause "case-to-case basis" means is, of course, ambiguous.

Apart from the strange math COA employs, there are serious mistakes in COA's thinking. First, COA makes the grave assumption that if a student does not pursue a mandated course in college, the money invested by the government on a student's high school education is wasted. PSHS is considered to provide quality secondary education to its students. The main reason why the government puts money into this school system is to raise the status of science and technology in the country. Improving science and technology not only requires scientists but also a citizenry that is knowledgeable in the sciences. Whether or not a scholar actually pursues a career in the sciences, a student educated in PSHS means that the country now has at least one more citizen who is not ignorant of the sciences. Having a solid foundation in the sciences is likewise useful in endeavors outside of basic, applied or biological science. Now, there are real cases of waste in Philippine government spending. One example is the following: 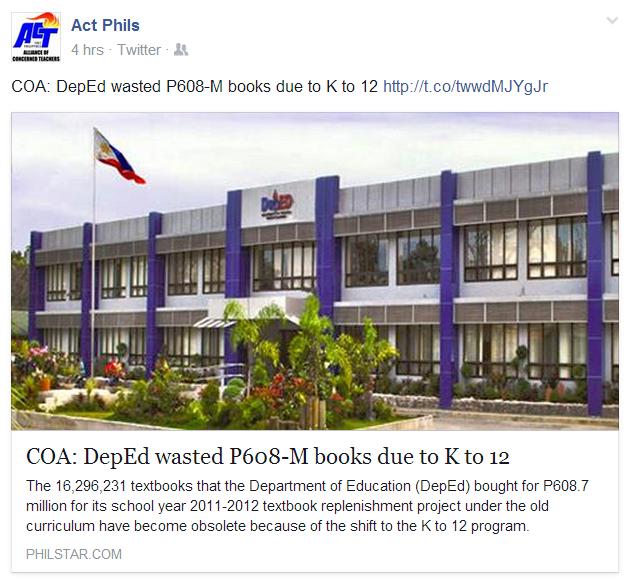 The second grave mistake is the contract itself. In Europe, the right to pursue a freely chosen or accepted occupation is considered a fundamental right. Promoting science and technology indeed requires providing students quality education in the math and sciences. PSHS helps in building a science and technology force for the country by providing an education that hopefully motivates students to pursue a career in the sciences. This is the best we could hope for. After all, basic education should remain a place where students are still discovering not just the world around them but also what their strengths, talents and interests are.