October 25, 2016
The headline on PJ Media Parenting maybe harsh, "The Evidence is Clear: Public Education Fails Dyslexic Students". Sadly, the truth is that public schools over the past decade in the United States have not been able to bridge the achievement gap between students who have disabilities and those who do not.

The Nation's Report Card likewise shows this gap clearly. Over the past twelve years, achievement gaps at the basic level in both Grade 4 math and reading remain at about 30 and 40 percent, respectively. 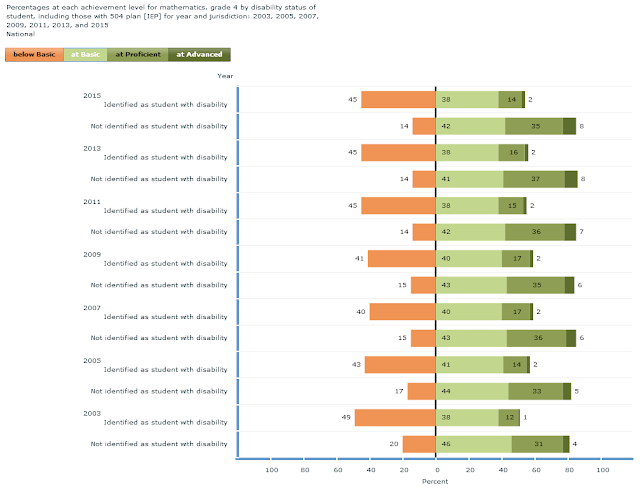 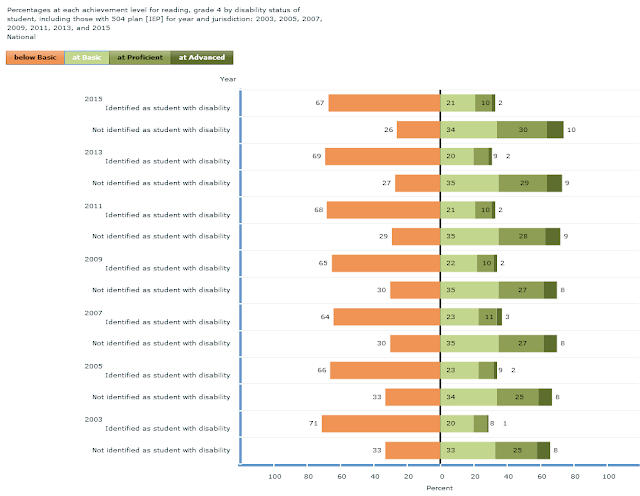 At this point, it is important to ask why these gaps are so stubborn. One reason is that evidence-based interventions are not easily implemented inside the classrooms. Cook and Odom demonstrate this in a mathematical equation that shows why evidence-based practices (EBP) are often not implemented:


Imagine, for example, that a school district adopts an EBP for its students with learning disabilities in elementary schools. District personnel are understandably excited to begin the new year by rolling out a practice that has been shown by multiple, high-quality studies to meaningfully improve outcomes for, say, 95% of elementary children with learning disabilities. However, only 80% of elementary schools agree to participate in the project (reach). Further, given problems related to training, planning and instructional time, and reluctance to adopt new practices, only 70% of teachers within targeted schools end up using the practice at all (adoption). Due to sometimes ineffectual training and lack of ongoing support, perhaps only 60% of teachers who adopt the practice implement it with fidelity; and only 50% of those maintain their use of the practice over the entire school year. In this scenario, actual impact is calculated as
.95 (efficacy) X .80 (reach) X .70 (adoption) X .60 (implementation) X .50 (maintenance) = .16

In addition to the absence or poor implementation of research-recommended interventions, disabilities are often couched in cultural or social terms. Kauffman and Bader capture this in their paper in the Journal of International Special Needs Education:

Whatever the underlying reason is behind the clear achievement gap between students with and without disabilities, correct steps are sorely needed.