How a Child Learns Math: Conceptual versus Procedural

October 20, 2016
My mother-in-law taught my daughter while she was in kindergarten how to add numbers. When adding for example 8 and 4, the five-year old child was instructed to put her hand on her chest and say "8", then she should proceed counting from there, "9, 10, 11, 12" (four more, to add 4 to 8). That was how she was able to arrive at the correct answer, "12". My daughter was actually proud when she was able to do it correctly on her own with any addition question thrown at her. At first glance, one might think that my daughter was simply learning a procedure, but the mere assignment of "8" as a starting point represented a very important concept in mathematics, the cardinal principle:  The idea that the last number reached when counting the items in a set represents the entire set. My daughter did not need to count from 1 to 12 to determine what 8 + 12 was. She could simply start with "8".

Figuring out what skills are important for a young child to learn in order to succeed in mathematics is an important question in education research. A paper scheduled to be published in the Journal of Educational Psychology addresses this:

As the above abstract suggests, conceptual knowledge of counting, which includes the cardinal principle, is among the important skills that correlate with achievement in early mathematics. However, when it comes to solving word problems, one must go further, additive reasoning and working memory are the good predictors. Additive reasoning is basically the ability to figure out what calculations need to be carried out. The following is an example from the British Journal of Educational Psychology:

Procedural knowledge does play a factor in math achievement in the early years but clearly, it is the conceptual knowledge that is much more important. Boby Ho-Hong Ching and Terezinha Nunes, in their recent paper, especially underscore the lesser role played by procedural knowledge since their study involves Chinese students. Some people sometimes ascribe the higher math achievement of young Chinese children to the language they have. An example is an article published by the Philippine Daily Inquirer: 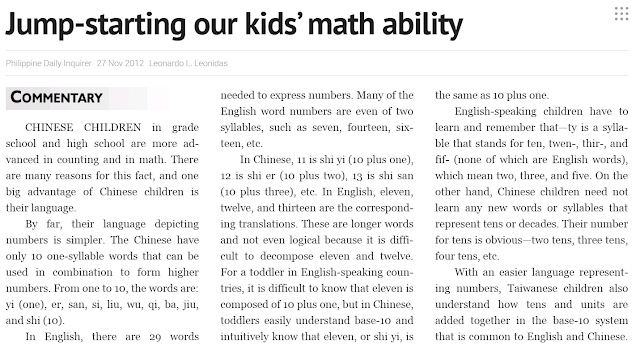 For this reason, it is important to do scientific studies so that we become better informed with regard to how children learn. Otherwise, we can fall easily for arguments that sound good but really have no evidence. The case of my daughter and her grandmother may be different, however. My mother-in-law, after all, had been a teacher all her life. From her vast experience, she obviously knows what works.